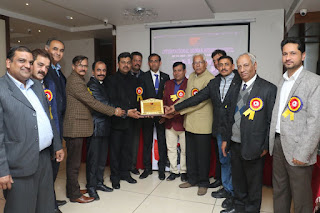 By 121News
Chandigarh 18th January:- The International Human Rights Council of  Chandigarh, Panchkula and Mohali region today organized its installation and induction ceremony for the year 2017. National secretary of IHRC, Ajay Garg was present as the chief guest.
On this occasion Lalit Bajaj was appointed as President of Chandigarh unit, Anil Arora appointed as President of Panchkula unit, Pradeep Sharma appointed as President of  Mohali unit, Rajnish appointed as President of Zirakpur. While N.K Bajaj appointed as a chief Executive of  Manimajra unit, Gulshan Grover appointed as a Director, Surinder Verma appointed as a  Media Incharge and Mohit Modi was appointed as a Joint Secretary.
During the program members were appreciated and awarded for their better engagement.
Newly elected Chandigarh unit chief Lalit Bajaj thanked to Ajay Garg and other official members of the Councils. He acknowledges public interest and to protect the human rights and take the Citizen Awareness Group on the new higher mode.
Surinder Verma, Chairman of Citizen Awareness Group & Media Incharge of Manimajra unit said that the central government's social development plans should be handed over to NGO’s as well as the financial assistance to be provided so that these plans can be implemented so as well. He said that his organization already working in the field of social welfare.
Chief Guest and council National Secretary Ajay Garg welcomed the newly appointed officials and said that organization is working on various projects i.e. Beti Bachao-Beti Padhao, Swacch Bharat campaign and  Nasha Mukt India campaign of centre Govt.


At the end of the Programme Joint secretary Mohit Modi gave vote of Thanks.
Posted by tricitynews online at 06:18