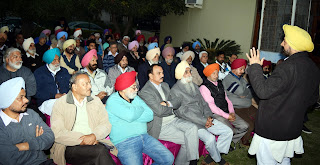 By Tricitynews Reporter
Chandigarh 03rd January:- Balbir Sidhu the Congress candidate from Mohali assembly seat has termed the state government recommendation to central government to end kerosene oil quota as an anti-poor. The SAD-BJP government real face of anti-poor has again come to fore while seeking cancelling of poor people kerosene quota.
Balbir Sidhu was speaking at a meeting of party leaders and workers from Mohali district at Sector 71 here last night which was convened by Dilbag Singh Dhindsa. Balbir Sidhu criticized the central government for increasing fuel prices. The common public which is already facing the great hardship due to demonetization will be adversely affected by the fuel price hike.
He said further that instead to work for bringing ‘acche din’ for country people ,  Modi government has added to their woes by announcing fuel prices hike on the first day of a new year. The poor are going to suffer more with this as they are already facing problem to make their both ends meet after demonetization has badly affected their daily earnings.
He demanded that Prakash Singh Badal, CM Punjab should clarify his stand on fuel price hike as international prices of oil are very low right now . Ironically UPA government led by Dr Manmohan Singh had never put extra burden on common man despite a steep hike in prices of oil in international markets.
Balbir Sidhu said that during UPA regime,  Akalis would create hullaballoo on small issues but now in NDA rule they have shut their mouth on anti-people policies of central government.  This reflect the dual face of Akalis for which they along with BJP have to pay heavy prices in coming assembly poll.

Posted by tricitynews online at 04:08