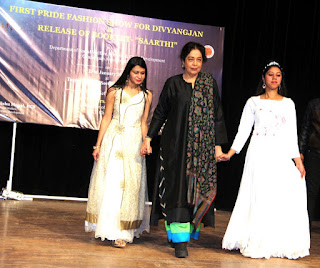 By Tricitynews Reporter
Chandigarh 23rd January:- The Department of Social Welfare, Women & Child Development Chandigarh Administration organized the First Pride Fashion Show for Empowerment of Divyangjan at Tagore Theatre today. Kirron Kher, Member of Parliament U.T. Chandigarh was the chief guest on this occasion.
The Fashion show was organized with the theme of inspiring empowerment of Divyangjan. 152 Divyangjan from different institutions i.e. SOREM, VATIKA, PARYAAS, GRIID, Institute for the Blind, National Association for Blind (NAB), Aasha Kiran etc participated in the Fashion Show. The participants of the Fashion Show were from different disabilities which included Visually Impaired, Hearing Impaired, intellectually Challenged, Physically Challenged and Cerebral Palsy. Department of Social Welfare with assistance of UIFT & VD and ENACTUS, Panjab University made this event a successful one.
The Department also released an information Guide “SAARTHI” today. The guide contains all the details relating to schemes/benefits available not only in the Social Welfare Department but also covering the benefits being provided by other Departments of Chandigarh Administration. It also highlights the initiatives/efforts by the Department of Social Welfare, U.T. Chandigarh to enable Divyangjan show to the world their strength of character, energy and positive attitude. It is an Information Guide for the Divyangjan in particular and the public in general. This booklet has been released in both English and Hindi versions and in all the variants i.e. Braille (English & Hindi) and Audio (English & Hindi) keeping in mind the target groups.
Kirron Kher, MP, Chandigarh appreciated the efforts made by the Social Welfare Department in organizing First pride Fashion Show and release of the Information Guide “SAARTHI”.

Posted by tricitynews online at 04:21