Prema Sees Another Side of Keshu in ‘Shrimaan Shrimati Phir Se’ 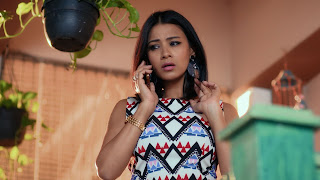 By Tricity News
Chandigarh 12th April:- Sony SAB’s latest offering Shrimaan Shrimati Phir Se is rapidly gaining popularity amongst the audiences due to its comic moments and characters who are funny. The 90’s remake has been successful in garnering viewer interest.
In the upcoming track, we will see that Dilruba (Suresh Menon) is supremely jealous of Keshu’s fondness for Prema. On the other hand, Prema (Barkha Sengupta) thinks that Keshu is an extremely sensitive and sincere person. Dilruba hatches a plan to make Keshu’s (Sameer Shah) look bad in front of Prema.
Dilruba hires a girl and asks her to flirt with Keshu. Keshu falls prey to the plan and flirts with the girl. Seeing this, Prema gets upset and believes that Keshu is a flirt.  Keshu, then, has to try hard to build his sanskari image back in front of Prema.
Commenting on the track, Barkha Sengupta said that Keshu is always successful in impressing Premaji. But with Dilruba’s plan, his image of being a sincere person goes for a toss. It will be interesting to see how Keshu falls for Dilruba’s plan and will he win back Prema’s confidence.
Posted by tricitynews online at 05:49