Sepsis can Lead to Multiple Organ Failure and Death if Not Treated Promptly: Dr. A.K. Mandal 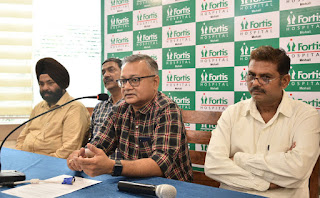 By Tricitynews
Chandigarh 17th September:- Sepsis arises when the body’s response to infection injures its own tissues and organs. It may lead to low blood pressure (shock), multiple organ failure and death – if not recognized early and treated promptly. Fortis Hospital, Mohali receives over 700 to 800 sepsis patients every year from the region informed Amit Kumar Mandal, Director, Pulmonology, Sleep & Critical Care, Fortis Hospital, Mohali.
He said that worldwide, approximately 27-30 million people develop sepsis per year and 70, 00,000–90, 00,000 die per year (almost 1 death every 3.5 seconds). To complicate further, antibiotic resistance makes it more difficult to treat as antibiotics form one of the major fighting forces.
Sepsis can affect anyone, as it does not discriminate between class, gender or age. It can also affect healthy individuals. The most vulnerable are extreme of ages, individuals with weakened immune systems and chronic diseases. Hence, we need to recognize and seek medical attention at the earliest.
Giving details about case history of a patient with life-threatening illness the medical team shared a real-life case history of a young healthy gentleman of 45 years with no co morbidities presenting to the hospital with fever, dry cough, decreased appetite, breathlessness and yellowish discoloration of the eyes since the last 6 days.
Detailed examination and investigations suggested the presence of pneumonia with liver and kidney dysfunction with low blood pressures. He was immediately admitted to the Medical Intensive Care Unit and initiated on treatment with fluid resuscitation, intravenous antibiotics and supportive care. His organ functions also continued to deteriorate in spite of adequate fluids and medications requiring support with elective ventilation and hem dialysis.
He had to be proned (kept face down) during his ventilation for better ventilation of his lungs. Extracorporeal cytokine adsorber device which has the capability of removing toxic substances had to be used. His blood pressures started stabilizing and became normal after 4 days with no more requirements for dialysis. He improved gradually with severe weakness slowing down his recovery. He was finally discharged after 3 weeks of stay in hospital.
Dr. Amit Mandal explained that Sepsis is an emergency and must be treated as aggressively as cardiac (heart attack) or neurological (stroke) problems. Sepsis can present variedly and even doctors may find it difficult to diagnose. It can produce high fever with chills, increased heart rate, increased breath rate, confusion or altered consciousness, slurring of speech, low blood pressures, decreased urine output or cold, clammy and pale skin appearance. The disease process may be mild with rapid recovery occurring in many patients. But in few unfortunate individuals the disease may be severe and may lead to organ failures requiring multiple organ support with artificial ventilation and dialysis. Up to 40 % of patients with low blood pressure may die, even after receiving the best of therapy.
There is a huge need to raise awareness about the disease in the community and save precious lives and livelihood. Global Sepsis Alliance has since 2012 been trying to raise awareness on sepsis with a celebration on 13th of September as World Sepsis Day.
Posted by tricitynews online at 05:23