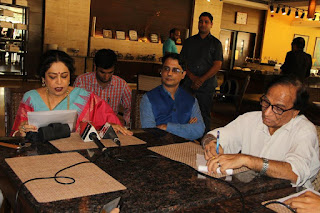 By Tricitynews Reporter
Chandigarh 07th November:- Ministry of Railways and Chandigarh Administration has finally given approval for the construction of Road under Bridge (RUB) at Manimajra, Chandigarh. An order was today issued by Chief Engineer, Chandigarh Administration today. Kirron Kher, Member of Parliament today announced the approval of RUB at a press conference today held at Hotel Mountview.  She said all clearances for the construction of RUB have been taken. She said that RUB would provide relief to the residents from the traffic woes at Manimajra level crossing and it was long pending demand of the area residents. This is another gift to residents of city in 3 days. She further added that gas pipe line project for the city will be inaugurated on 11th November at Sector-49.
She said that she made strenuous efforts to get this demand fulfilled. The foundation stone will be laid immediately after Municipal Corporation Elections and the project will likely to be completed by September, 2017. She said that height of underpass will be 3 mts (10 feet) and total width of the road will be 36 feet (18 on each side). She said that there will be water drainage system to avoid water logging during rainy season. The total estimated expenditure incurred on this project shall be Rs. 4.25 cr. She thanked Union Minister of Railways Suresh Prabhu, Administrator, UT VP Singh Badnore, Advisor to the Administrator Parimal Rai and Chief Engineer Mukesh Anand for extending cooperation.
It may be noted that the proposal for construction of RUB was mooted more than five years back.  The railway crossing at Manimajra is a traffic bottleneck. Every time a train crosses, there are traffic jams on either side. The road on one side of the crossing is quite narrow. Once the gates of the crossing open, it takes time for the traffic flow to normalize. Commuters on the stretch have for long been demanding construction of the Road under bridge. Another advantage of construction of the under bridge would be that the commuters between Chandigarh and Panchkula would find an alternative road to travel on. At present, the Madhya Marg extension that joins Chandigarh and Panchkula bears a large share of the traffic. It causes congestion on this stretch. The road from Manimajra is not favored due to the level crossing which proves to be a hurdle.
Posted by tricitynews online at 05:00 No comments:

By Tricitynews Reporter
Chandigarh 07th November:- This is for the information of the general public that due to repair a leakage in 1200mm I/D PSC pipe line of Phase-III (from Kajauli Water Works) at Baldev Nagar and Village Sangatpura, there will be no pumping of raw water from Water Works Kajauli  to Water Works Sector 39 Chandigarh. So, on November 08th the timings of water supply for whole city shall be available in the Morning from 4.00 am to 8.00 am. at full supply and in the evening from 6.30 pm. To 8.30 pm water supply at low pressure and on November 09th   the supply in the morning shall be available at low pressure and in the evening at full supply.
Posted by tricitynews online at 04:37 No comments:

Posted by tricitynews online at 04:23 No comments: