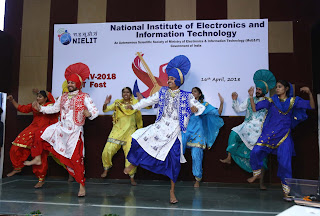 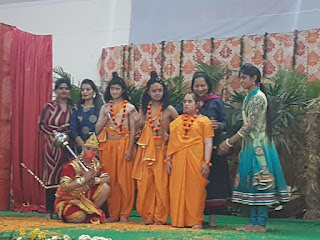 By Tricity News
Ludhiana 16th April:- Nirdosh School for the Mentally Challenged celebrated its annual day in Ludhiana today.
This year the students of the school presented a play on the Hindu legend Ramayana. Students were decked in period costumes and depicted the mythological story with great acting prowess. The play was choreographed by Ms Kitty Bakshi.
Speaking on the occasion Suchita Jain Joint Managing Director Vardhman Textiles lauded the efforts of the children. She also gave valuable advice on the advancement of the School. The Guest of Honour Councillor Ms Mamta Ashu spoke on the occasion and assured that the school would get all assistance from the Administration.
Welcoming all the guests Chairperson of the School Ms Poonam Bindra appealed to all the citizens of the city to come forward and help in the rehabilitation of the students who pass out from the School. She appreciated the efforts of the parents of the special children and requested them to be in constant touch with the teachers so that their child would be able to benefit with all the facilities at the school.
Elaborating on the achievement of the School this year, Principal Surat Singh said that 2017-18 was a landmark year for the school. This year the school was awarded the Foreign Currency Regulation Act Certificate (FCRA) by the Union Home Ministry after a thorough vigilance enquiry. This Certificate will now ensure that all donations to the school are transparent.
Further the year marked many achievements in the field of sports. Students of the school got various Gold, Silver and Bronze medals at Special Games held all over the country. Just recently, a student of the school Anmol was awarded a silver medal at the roller skating event held in Hyderabad.
Nirdosh School for the Mentally Challenged is run by the Inner Wheel Club of Ludhiana since the last 40 years. The School has the honor of receiving recognition from the district, state and even national committees. At present the school has 62 children and 13 staff members which include two special educators.
Posted by tricitynews online at 05:29 No comments: 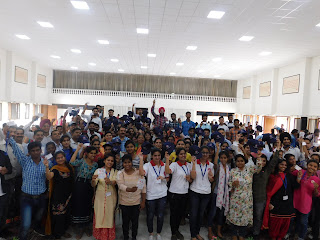 By Tricity News
Chandigarh 16th April:- An Orientation Programme for the Project 'SAARTHI' by State NSS Cell in collaboration with Indian Red Cross Society (IRCS), Chandigarh with the support of NSS Units of PU, Chandigarh, its affiliated colleges and PGIMER, Chandigarh was organized by the NSS Units of Dev Samaj College of Education, Sector-36 B, Chandigarh  today. The Chief Guest on the occasion was Ajit Balaji Joshi, Deputy Commissioner and Chairman, IRCS, Chandigarh.
The other main guests were Bikram Rana, State Liaison Officer, NSS, UT, Chandigarh; Dr. Navdeep Sharma, NSS Coordinator, PU, Chandigarh; Dr. Mini Arora, Medical Officer, IRCS, UT, Chandigarh; Dr. Raman Sharma, Assistant Professor, PGI, Chandigarh; Dr. Madhu, Assistant Program Advisor, NSS Regional Directorate and Sushil Tank, Indian  Red Cross Society, Chandigarh. Volunteers from NSS Units of DSCE-36, PGGCG-11, MCM DAV-36, DAV-10, PGGCG-42, PGGCG-46, GGDSD-32, SGGS-26, CCET-26, GCCBA-50 and PU Campus attended the orientation programme.
Ajit Balaji Joshi shared his idea of the project 'SAARTHI' and his expectations from the NSS Volunteers. He also appreciated Dev Samaj College for successfully organizing this orientation programme.
Bikram Rana motivated the students and appreciated them for volunteering for this noble cause. He also talked about the objectives of this project.
Further Dr. Mini Arora instructed the volunteers about the Do’s and Don’ts  to be kept in mind while serving the patients, and Dr. Raman Sharma emphasized the importance of providing psychological support to the patients and their attendants.
Dr. (Mrs.) Agnese Dhiilon, Principal of the College gave her heartiest wishes to the NSS Cell, UT Chandigarh, IRCS, Chandigarh,  NSS Units of PU, its affiliated colleges and PGIMER volunteers and wished for the project to become a great success.
Posted by tricitynews online at 05:25 No comments: 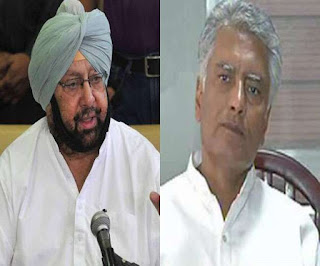 By Tricity News
Chandigarh 16th April:- Punjab Chief Minister Captain Amarinder Singh on Monday dismissed reports of differences with PPCC president Sunil Jakhar as a media creation, even as he declared that the Navjot Singh Sidhu case was none of the Akalis’ business and they should stay out of it.
In an informal chat with media persons after flagging off a fleet of nine new ambulances here, the Chief Minister lauded Rajya Sabha MP Ambika Soni’s initiative in procuring these ambulances under the MPLADS Fund and urged other members of Parliament to follow suit.
Responding to questions, the Chief Minister said there were absolutely no problems between him and Gurdaspur MP Sunil Jakhar. It was the creation of the media, which had blown out of proportion a small incident in which Sunil Jakhar had left without meeting him because he had to go somewhere else, said Captain Amarinder Singh.
Once again ruling out the need for Local Government Minister Navjot Singh Sidhu to quit over the Supreme Court proceedings in the road rage case against him, Captain Amarinder Singh said the situation did not warrant Sidhu’s resignation. He lambasted the Akalis for seeking his resignation, asking them to keep out of the affair, which was nothing to do with them.
In reply to a query on the Phagwara clash, the Chief Minister said the situation was completely under control. While some of the culprits responsible for the violence that took place on Ambedkar Jayanti were already in custody, the others would also soon be arrested, he said.
There was no law and order problem there now, said Captain Amarinder Singh, asserting that his government would not allow anyone to disturb the state’s peace and communal harmony. Strict action would be taken elements trying to trigger any kind of disturbance in the state, he added.
Earlier, speaking at the flag-off event, the Chief Minister said a Chinese company had expressed interest in setting up a mobile handset manufacturing unit in Mohali, which was emerging as a major industrial and IT hub. He expressed satisfaction at the positive response received by his government from industry and investors not just from within the country but also from other parts of the world.
Posted by tricitynews online at 05:18 No comments: 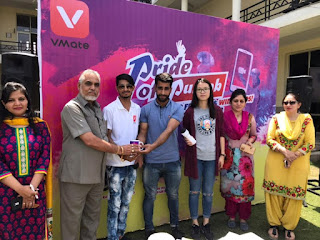 By Tricity News
Chandigarh 16th April:- VMate, a short-video based mobile social platform from Alibaba Digital Media and Entertainment Group, has recently brought the talent-showcasing stage to campuses in major cities of Punjab, including Chandigarh, Ludhiana, Jalandhar and Amritsar. The offline presence of ‘Pride of Punjab’ campaign in over 50 campuses across the four cities has enabled college students to express themselves mainly through dancing, singing and rapping offline while being filmed on VMate. Over 1,20,000 students have been reached since the launch of the campaign and colleges like Shaheed Udham Singh Group of Institutions have highly praised the campaign.
Appreciating VMate’s efforts to enable students showcase their talent, Er Sukhwinder Singh Sidhu, Chairman of Shaheed Udham Singh Group of Institutions said that we are glad to have VMate team to organize the 'Pride of Punjab' campaign in our campus. People in Punjab are indeed versatile, and the on-ground activity on campus does provide a good opportunity for students to showcase their talents among school friends and encourage each other for hobby development. We hope that VMate can continue such cheering effort, bringing students to a bigger stage for colorful life and a bright future.
‘Pride of Punjab’ has gained popularity especially amongst the youth. Youth from different cities of Punjab have been submitting videos that capture different facets of people of Punjab including dance, food, traditional attires, etc.
Posted by tricitynews online at 05:11 No comments:

By Tricity News
Chandigarh 16th April:- Giving a major fillip to his government’s drive to strengthen the state’s healthcare facilities, Punjab Chief Minister Captain Amarinder Singh on Monday flagged off nine hi-tech ambulances, equipped with world-class equipment, from Mohali.
The Chief Minister lauded the efforts of Rajya Sabha MP Ambika Soni, who had procured the ambulances from MPLAD Funds for the nine segments of Sri Anandpur Sahib Parliamentary Constituency, which includes Mohali.
Urging other Congress MPs to emulate Ambika’s pro-poor initiative, the Chief Minister said such initiatives would go a long way in improving the health services in the state, which had witnessed significant strengthening of health infrastructure in the past one year. He cited the decline in the number of fatal road accidents to point out that timely on-road medical assistance through such ambulances can significantly cut down on fatalities.
Captain Amarinder Singh said his government was working on the upgradation of health services in Mohali, which had emerged as a major industrial and IT hub.
Speaking at the event, Ambika Soni described the ambulances as her humble contribution towards the Chief Minister's mission to provide the best health and medical services to the people at affordable cost. She also urged her colleagues to undertake similar endeavours to ensure quality health for all.
While three ambulances will cater to the needs of the people of Rupnagar, two have been earmarked for SAS Nagar, three for Shaheed Bhagat Singh Nagar and one for Hoshiarpur.
The ambulances are equipped with ABS interiors, foot operated hand wash system & wash basin, inverter, emergency light bar with siren & public address system, oxygen cylinder trolley for loading 2D type oxygen cylinders & side door for accessing oxygen cylinders (without oxygen cylinders), analog oxygen delivery system besides auto loader stretcher trolley with floor mounting mechanism.
In his address, Health & Family Welfare Minister Brahm Mohindra appreciated the Chief Minister for his personal efforts in getting the Mohali Government medical college approved from the Centre. He said the previous SAD-BJP regime did not pursue the college proposal effectively, and in fact, the then Deputy Chief Minister Sukhbir Singh Badal had explicitly stated the state government's inability in this regard on the relevant file.
Reiterating the Congress government's commitment to set up five new medical colleges in the state, Mohindra said that a beginning had been made from Mohali and the plans for the remaining four would also be realised soon. On the occasion, Mohindra joined the Chief Minister in reviewing the plans for the Mohali medical college.
Prominent amongst others who were present on the occasion were Technical Education Minister Charanjit Singh Channi, Media Advisor to CM Raveen Thukral, Principal Secretary to CM Tejveer Singh, MLA Mohali Balbir Singh Sidhu, MLA Nawanshahar Angad Singh Saini, MLA Hoshiarpur Shayam Sundar Arora, MLA Balachaur Chaudhary Darshan Lal, Former Ministers Jagmohan Singh Kang and Ramesh Dutt Sharma, Principal Secretary Health Anjali Bhawra, Mission Director NRHM Varun Roojam and Deputy Commissioner SAS Nagar Gurpreet Kaur Sapra.

Posted by tricitynews online at 05:06 No comments: