By Tricitynews Reporter
Chandigarh 28th September:- Radio network 92.7 Big FM  brought back the renewed edition of ‘Suron Ki Nau Deviyan’ with an aim to celebrate a nine-day musical fest with a focus on women empowerment. Big FM became the first radio station to specially compose nine sufi-folk songs highlighting the virtues of the nine goddesses during Navratri. Nine female artistes , who included renowned bollywood singers like Shweta Pandit, Harshdeep Kaur, Prajakta Shukre and Shradha Pandit featured solo in the videos of these songs.
The activity created right connects with listeners during a one-hour special evening show dedicated to each singer during Navratri. Big FM spokesperson stated that it is our conscious effort to be a platform that provides meaningful content that is edgy and relatable. While we are connected with listeners through the power of radio we are also taking our digital presence a step forward with engaging video formats”. The sheer magnitude of the nine day activity was that well-known artists on-board bolstered the appeal for our listeners and digital consumers across demographics, thereby providing extensive visibility to the advertisers.
‘Suron Ki Nau Deviyan’ is an amalgamation of music and story-telling through which the radio network celebrated Navratri. Big FM aims to embody the essence of providing more music to its listeners with content that promotes women empowerment through the dedicated songs. The one-hour special show was based on the theme which symbolizes the virtue of the goddess of that specific day such as strength, beauty and power. With songs highlighting these expressions in the voice of the singers that resonate with each, the radio station celebrated women power . Listeners were   enlightened with motivating narratives on the journey and accomplishments of these distinguished female artists.

Posted by tricitynews online at 23:21 No comments: 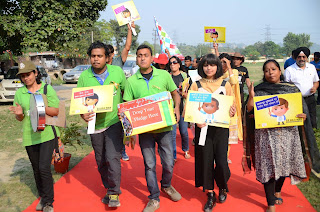 By Tricitynews Reporter
Chandigarh 28th September:- The 5-day long 6th CanKids childhood cancer awareness rally concluded at Rail Majra near Ropar today. The rally, aimed to spread awareness on childhood cancer, was organized in association of Max India Foundation (MIF). Over 20 childhood cancer survivors took part in rally which was started from New Delhi on September 23.
Mohini Daljeet Singh , CEO- MIF , Ramneek Jain, CEO Max Speciality Films and Dr Sachin Gupta , medical oncologists at Max Hospital , Mohali, welcomed the rally and its participants . The cancer survivors reciprocated by spreading the important message that childhood cancer is curable. They performed to show the energy of the champions.
During occasion, Muskan, a young cancer survivor of 17-yr shared her experience and exhorted the need to speared awareness on cancer so that the disease could be checked in its initial stage.
Dr. Sachin Gupta spoke on the curability of childhood cancer. He appreciated the role played by CanKids and MIF in providing funds and support for the treatment of needy children.
Ironically in India, it is estimated that nearly 40000 to 50,000 new childhood cancer cases present each year. As in adult cancers, 70% children with cancer still die of disease in India due to lack of awareness, late detection and diagnosis, inadequate pediatric cancer treatment facilities, the exorbitant cost of treatment and lack of supportive care.
Mohini Daljeet Singh said that the need of the hour is to ensure that childhood cancer is recognized as a child health priority in the country. MIF aims for holistic care for children with cancer and their families, in all its endeavors. We strive to improve survival of children with cancer & quality of life and the rights of the child with cancer and the family.

Posted by tricitynews online at 23:16 No comments: 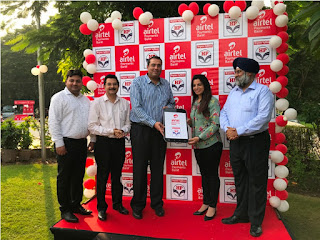 By Tricitynews Reporter
Chandigarh 29th September:- Airtel Payments Bank customers can now make secure and convenient digital payments for fuel purchase at 916 HPCL fuel stations across Punjab and Chandigarh. The announcement was done today during the inauguration of first HPCL fuel station as banking point in Punjab and Chandigarh at the HPCL fuel station in, Sec 31, Chandigarh.
These cashless payments can be made via smartphones (MyAirtel App) as well as feature phones (USSD) and customer is not charged any transaction fee for these digital payments.
All Airtel Payments Bank customers would also be able to access a range of convenient banking services at these 916 fuel stations e.g., open new accounts, make cash deposits and withdrawals facility, and transfer money. This will add to the depth and reach of Airtel Payments Bank’s retail based network that leverages over 40,000 Airtel retail outlets as banking points in the state.
Shashi Arora, MD & CEO, Airtel Payments Bank said that the partnership with HPCL would boost our endeavor to build a robust and diverse merchant ecosystem that brings more digital payments avenues to our customers. We are, in particular, pleased to have these fuel outlets as our banking points. We are confident that this partnership will add to the growth of digital payments in the state of Punjab and contribute to the Government’s Digital India vision.

Posted by tricitynews online at 23:13 No comments: