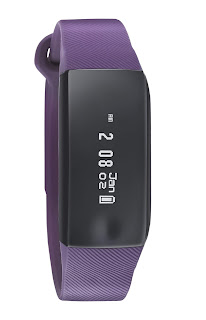 By Tricitynews
Chandigarh, 08th Jan 2020:- Fastrack, India’s leading and celebrated youth accessories brand strengthens its presence in the smart wearable category with the launch of Fastrack Reflex Beat. This is the fourth variant in the Fastrack Reflex series since the launch in 2017. With this launch, Fastrack Reflex Beat becomes the only fitness brand in India which is certified by the National Health Academy.
As a new updated band from Fastrack, Reflex Beat has a Heart Rate Monitor which helps in measuring heart rate at any given point of time. The band records heart rate automatically every 5 minutes, which gets recorded on the app and can also be viewed on-demand. The user can later see their minimum to maximum heart rate trend in a day on the Reflex App. This presents a trend report of the heart rate which can be referred to during any anomaly.
Speaking about the launch, Ayushman Chiranewala, Marketing Head, Fastrack said that Fastrack, as a brand has taken pride in leading the conversation regarding youth fashion and trends and fitness, is one trend which is here to stay. With each smart band introduced under Fastrack Reflex, we have endeavoured to bring feasibility for the GenZ fashion. This generation is constantly on a lookout for tech-related, feature-rich products and we aim to fulfil this desire with Reflex Beat and make their lives easy and on the go.
According to the Indian Heart Study (IHS), Indians have an average resting heart rate of 80 beats per minute, which is higher than the desired rate of 72. A fast resting heart rate is an indication of brewing heart condition; therefore, whether it is for a routine check or for keeping a close watch during a workout, fitness bands today have become a crucial accessory for everyone. With Fastrack Reflex Beat, fitness enthusiasts can gauge the effectiveness of their workout by measuring the heart rate during the workout to understand the intensity, i.e. if the user is pushing too hard or needs to push harder to achieve the level of fitness he/she is seeking.
With the success of Reflex 2.0 and Reflex WAV we observed a pattern of increased activity levels across all our consumers. The natural extension for us was to introduce a new version of Reflex with a Heart Rate Monitor (HRM). Considering the vastness of our country we have made special efforts to tune the HRM to give accurate readings across demographics. We hope this will help consumers to track their fitness more effectively.
Posted by tricitynews online at 04:59 No comments: 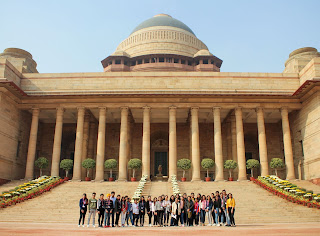 By Tricitynews
Chandigarh, 08th Jan 2020:- Students of interior design at JD Institute of Fashion Technology, a pioneer in the field of design education for the past 31 years, visited Rashtrapati Bhavan, the largest official residence of India, to study its historic and magnificent art and architecture.
Rashtrapati Bhavan was designed by Sir Edwin Lutyens and Herbert Baker and is a subtle blend of Indian and European architecture. The students returned with a deeper understanding of the various aspects of construction, design, planning and art styles of the magnificent building.
Ms Rupal Dalal, Executive Director, JD Institute of Fashion Technology, said that we strive to provide experiential learning to our students. The Rashtrapati Bhavan is an iconic creation and a showcase of Indian architecture and I am sure the interior design students learned a lot during their visit.
Posted by tricitynews online at 04:54 No comments: 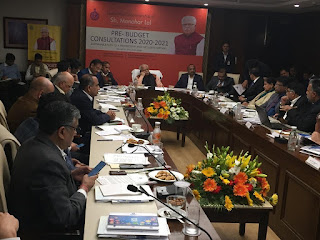 By Tricitynews
Gurugram, 08th Jan 2020:- The Haryana Chapter of CII submitted Pre Budget Memorandum for the year 2020-21 to Manohar Lal, Hon’ble Chief Minister, Haryana today at Gurugram. In the memorandum, CII has made suggestions on issues ranging from GST, Infrastructure Development, and Reduction in Passenger Tax, Industrial Development and Skill Development amongst others.
While presenting the memorandum, Anuj Munjal, Chairman, CII Haryana State Council & Executive Director, Munjal Auto Industries Ltd said that “Haryana has huge untapped growth potential which can be leveraged to take Haryana’s GDP to USD 250 billion by 2023-24”. This can be achieved by sustaining double digit growth in State GDP, moving towards cash crops, creating food parks around mega food parks, sustaining Haryana’s share in automobile manufacturing in India; and positioning Hisar as MRO hub of Northern India amongst others said Anuj Munjal. For accelerating growth of Start-Ups, CII recommended Government to create common testing facilities to reduce operation costs along with Government funded programmes for their business development. Besides, CII also suggested the provision of hand holding by Government for filing patents and IPR registrations to promote R&D and technology absorption.
On the GST front, it has been suggested to request the Government of India to exempt Wheat Products from GST irrespective of whether branded or not and also to reduce local taxes levied in Haryana on wheat in the form of Arhatiya Commission at the rate of 3.5%. It has also been requested to formulate “Sabka Vishwas Scheme for State Tax Laws” on the lines of “Sabka Vishwas (Legacy Dispute Resolution) Scheme, 2019” of the Government of India that resolves all disputes relating to the erstwhile Service Tax and Central Excise Acts.
To encourage shared mobility, the memorandum suggests reducing Passenger Tax which was increased by 5 times of the prevailing rate in the year 2017. With the focus on infrastructure sector, CII has suggested to make a time bound plan with targets for completion of major projects viz. Rewari-Hisar as an Industrial Area; and developing Convention Centre Project at Gurugram amongst others.
To promote green buildings in the State, Haryana Government should make Green Buildings Certification mandatory for all the new and existing government buildings. As orders for closure of Industrial activities across Delhi NCR come soon after Deepawali on account of increased pollution, it has been suggested in the memorandum to urge the Hon’ble National Green Tribunal to clarify in their order that Industrial Units that are complying with the emission norms (or using Natural Gas or other such environment friendly fuels) are out of the purview of this order and they are free to continue with their industrial activities as per the prevailing environmental laws and approvals.
On the employment front, CII has suggested the State to consider setting up Model Career Centres in all the districts of Haryana. These Model Career Centres will provide last mile connectivity between job seekers and industry / businesses.
To meet the challenges of water scarcity, CII has already conducted Water Mapping Studies for Gurugram and Faridabad districts. CII proposes to the State Government to earmark funds for carrying out similar scientific studies for the Water mapping of the remaining districts for the better water development and water management purposes.
Posted by tricitynews online at 04:49 No comments: 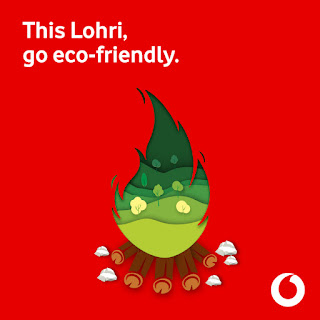 By Tricitynews
Chandigarh, 08th Jan 2020:- The festival of Lohri is celebrated with great fervour in Punjab. This festival not only represents the onset of spring, but also signifies new beginnings. The bonfire lit during Lohri represents the end of negativity and evil, and the celebration of goodness and positivity. This Lohri, Vodafone Idea Limited will be distributing Biomass briquettes, to enable the residents of Tricity to celebrate the festival with reduced smoke levels.
Biomass is an organic and renewable source of energy. The use of briquettes based on biomass reduces the amount of CO2 and sulphur released in the atmosphere.
Vodafone’s eco-friendly Lohri campaign is in line with the company’s larger objective of reducing carbon footprint. With the use of these biomass briquettes, the people of Tricity (Chandigarh, Mohali and Panchkula) can substantially contribute to a smoke free environment and can celebrate this auspicious festival in an eco-friendly way.
The free Biomass briquettes can be collected from the nearest Vodafone store in Tricity from 8th to 13th January. People collecting these briquettes will also be provided with a QR code which will take them to a video with instructions on how to use it.
Vodafone Idea Limited will also be celebrating Lohri using these Biomass briquettes at key locations where the company will deploy technology to measure the Air Quality Index of the area where Biomass is burning and compare it with the AQI of normal wood burning.
Extending his Lohri greetings to the residents of Punjab, Sudhir Pradhan, Business Head- Punjab, HP & J&K, Vodafone Idea Limited, said that the Vodafone brand has always gone beyond just connecting people. Over the years, we have constantly come up with innovative ways to be a part of the special moments in the lives of our customers. With Vodafone Eco Lohri, we are ensuring that the festival is celebrated with its ritualistic grandeur, minus the environment hazards. We are keen to reach out to as many residents as possible with this message, so please bring your friends and loved ones to your nearest Vodafone store to collect the Vodafone Eco Lohri Biomass briquettes and enjoy the festival responsibly.
The campaign will also be promoted on social media using Geotagging on platforms such as Facebook (Vodafone Zoozoos) and on Instagram (Vodafone India).
Posted by tricitynews online at 04:43 No comments: 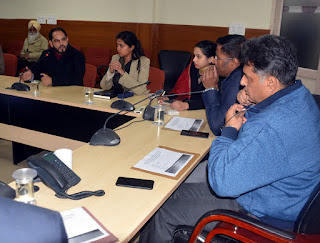 By Tricitynews
Mohali, 08th Jan 2020:- Member Parliament Sri Anandpur Sahib Manish Tewari has come up with the idea for developing an Electronic and Film City in Mohali, and to bring this project into being, he directed the district administration to earmark the land in Mohali city. He asserted that more employment opportunities will be created with this new project.
Reviewing ongoing and upcoming projects of GMADA in a meeting with district officials here at District Administrative Complex, Manish Tewari said that Mohali city, which is very strategically situated in close proximity to the International Airport and meticulously planned, is rapidly developing into the Next Big IT Hub. Attracting attention of leading corporate houses, another feather should be added in the cap of the City by developing Electronic and Film City, which would be on the pattern of Taiwan.
He asked the officers/officials to ensure that ongoing development works in the district should be completed in a time-bound and result oriented manner so that the people of district could be benefitted.
Accompanied with the Deputy Commissioner Girish Dayalan, He also reviewed the ongoing works of all the departments especially Municipal Corporation, Water Supply and Sanitation, Rural Development, Horticulture and others and directed Horticulture department to ensure all the pending cases of subsidies must be cleared within stipulated time frame. Likewise, Manish Tewari also asked the officials to take the possession of land of National Centre of Excellence for Gaming and Animation. He directed the authorities to check feasibility of the Bio fuel projects to benefit the people with the less price of the fuel.
The Lok Sabha MP also asked to expedite the work of constructing infrastructural projects in the district. He also asked the officers to accord top most priority to the works of public welfare so that benefits of the pro-people and development oriented policies of the state government were percolated to the people at grass root level.
Batting for optimum utilization of funds under the government schemes, Manish Tewari underlined the need for encouraging the segregation of waste and asked to make compost and electricity from the waste. He also stressed on the need to incentivize the mushroom farming to root out the problem of Paddy Straw.
Prominent amongst others present in the meeting included Chairman Punjab Large Industrial Development Board Pawan Diwan, ADC (G) Sakshi Sawhney, ADC (D) Aashika Jain, Commissioner MC Mohali Kamal Kumar, DSSO Ravinder Singh Rahi, DFO Gur Amanpreet Singh, DWO Sukhsagar Singh, General Secretary Basketball Association of India Chander Mukhi Sharma and Secretary PPCC Harpreet Singh Bunty were present.
Posted by tricitynews online at 04:37 No comments:

IK Onkar Will Be Established at Desh Bhagat University 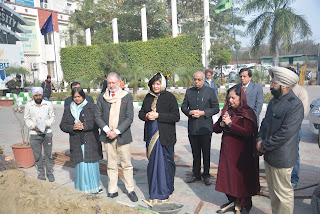