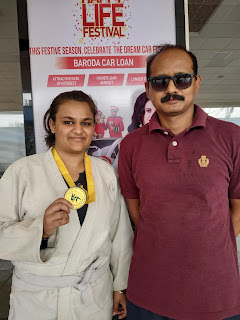 By Tricitynews
Chandigarh 20th November:- Shagun Rajput, a student of I S Dev Samaj Senior Secondary School, Sector 21 here, has done tricity proud by winning a bronze medal in the ongoing 65th School National Games in the Under-17 Judo Boys/Girls Championship 2019. The games are being held at Sports Authority of Gujarat, Bhavnagar.
Shagun has also made her way in the ‘Khelo India Youth Games 2020’.
Shagun said that the whole credit goes to her family and coaches, who showed faith in her and kept her morale high throughout the tournament. It was a tough competition, but her coaches’ guidance helped her secure the medal at a national level.
Loveleen Bedi, Principal of I.S Dev Samaj School & Sabeeha Dhillon Mangat, Chief coordinator of the school congratulated Shagun and the coaches for the achievement and gave them best wishes for  future events.
Shagun was trained by Govind Singh and Bhagwan Singh at the I S Dev Samaj Judo Academy. Govind Singh said that Shagun Rajput is a very dedicated and hardworking girl and she has been continuously bringing laurels to the school and city from 2016 till date, while participating in judo competitions.
Bhagwan Singh aqdded that twenty-one students of our school’s academy; were selected for the national judo camp. Out of these, 13 students have made their way into the school national games to be held at different venues like Gujarat, Delhi, and Maharashtra this year.
Posted by tricitynews online at 04:41 No comments: 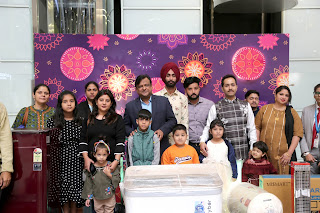 By Tricitynews
Mohali 20th November:- The festival season brings a sale season in India, especially in Northern side of the country. To entice more customers, shop owners make different types of offers available to the customers. This not only helps on promotion but also helps increase the sale. And Bestech Mall in Mohali, Punjab did just that with one of the biggest shopping Diwali Dhamaka in the Tricity.
The mega sale was organised on 19th October and it continued till 17th November. During this, if the customers purchased products whose total worth would be more than Rs. 2000 then they would get the chance to win various gifts.
Varun Dhaina won a TVS Jupiter scooter, Sonia Dhillon and Arun Sharma won juicer each, Rajat Inder Singh and Vaishav Goyal won microwave each, R.S. Rana won a washing machine, Nitin Thakur won a refrigerator and Kapish won a heater, respectively.
The organisers of the shopping festival said that the festivals season brings a lot of excitement in the markets. Customers from far off places come to avail the heavy discounts offered by the shop owners. We, on the other hand, went one step ahead and gave them one-stop-destination-shop and on top of that, organized one of the biggest Diwali Dhamaka sales. This way, customers didn’t have to go anywhere else to look for different products. It’s a win-win situation for both parties.
Posted by tricitynews online at 04:36 No comments:

Trust in Equity the Highest for Investors in Punjab: Karvy’sIndia Wealth Report

By Tricitynews
Chandigarh 20th November:- Karvy Private Wealth, the wealth management arm of the leading financial-services conglomerate, Karvy Group, has revealed some interesting insights on the investment habits of individual investors in Punjab in the India Wealth Report 2019. As per the report, which tracks down every rupee invested in every asset class, by every individual in India, individual investors in Punjab have placed their trust in equity the most.
Individual investors in Punjab have opted for a higher allocation to equity products in their mutual fund portfolio at 68.11%, as compared to the national average of 64%.Chandigarh, Ludhiana, Amritsar & Jalandhar have all recorded a higher equity share in total AUM than the national average. Overall, mutual funds grew by a healthy 9.99% YoY in Chandigarh.This is in line with what was highlighted in the report; that tier-2 and tier-3 cities will be significant contributors to mutual fund AUM growth in the years ahead.
While equity seems to be the favorite asset class, keeping in mind the volatility in the markets, term deposits continue to remain a safe bet for investors. Overall growth rate in deposits is close to the national growth rate. Amongst the cities in Punjab, Chandigarh recorded the highest YoY growth at 12.12%, followed byAmritsar at 11.39%.
Commenting on the occasion, Abhijit Bhave, CEO, Karvy Private Wealth, said that Direct Equity continues to hold the fort in terms of investment preference in India. This shows the belief of investors in the Indian equity markets notwithstanding the volatility it has been through. We believe that India’s drive towards a USD 5tn economy will have a cascading positive effect on the individual wealth by 2024. We expect the HNI population to touch 1 million over the next five year.
The report further stated that there would be a continued shift towards financial assets in India in the near future as well.Massive investment in Infrastructure and Green Energy, backed with a regulatory boost with tax reforms, aided by a huge young workforce, will accelerate the Indian economy towards the $5 trillion target once there is a pickup in consumption. Urban India will go hand in hand with the semi-urban and rural Bharat to achieve this feat.
Posted by tricitynews online at 04:31 No comments: 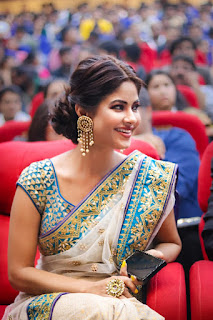 By Tricitynews
Chandigarh 20th November:- The talented actress Meera Chopra who stunned the audience with her phenomenal performance in her last film Section 375 is currently in a happy space. The diva who played a pivotal role in the film along with Akshaye Khanna and Richa Chadha has received a lot of positive reviews and now her work is getting its much deserved recognition. The actress recently won the award for the Best Actress in a Negative Role For Section 375 at Global Film Festival 2019.
Meera who has been headstrong with her choices of roles and has always gone beyond her limits to deliver with perfection, was overwhelmed with joy for her first award for Section 375.  The versatile actress was presented the award by the well-known director Priyadarshan.
Expressing her happiness, Meera said that it’s an honour for me to receive an award from an ace director Priyadarshan and she is so happy that my hard work paid off.  She feels Anjali was one of the toughest characters She have portrayed on screen.  'Section 375' was a life-changing experience for her and for her career.  Shooting for this role really broke her heart, to even imagine what real rape victims go through, She is glad she could do justice to it and it has made a difference in society in some way.
The 12th Global Film Festival 2019 was held in Noida and was attended by Bollywood celebrities, diplomats from various countries, and the governor and union minister of India.
On the work front, Meera will be next seen in Amazon Prime’s webseries titled ‘ Kamathipura’, where she will be seen in a never seen before avatar of a cop, and she has finished a major portion of the shoot.  The series is expected to release in the coming few months and we are eager to see what Meera has in store for us now.
Posted by tricitynews online at 04:26 No comments: