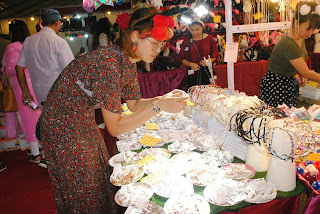 By Tricitynews
Chandigarh 20th September:- Tricity’s biggest furniture extravaganza, ‘Furniture & Home Décor Expo 2019’ has kicked off at Parade Ground, Sector 17, Chandigarh here. The four days inimitable expo is being organised by I Ads & Events, an organization which is known for putting up such huge & unique expos. The expo will be on from September 20 till September 23, 2019.
On its opening day visitors thronged the expo in large numbers, & experienced a large collection of some of the best quality & the finest furniture, interiors and home décor items.
Speaking on the occasion, Raees  Arif, Founder & Director of theI Ads & Events said that we are privileged to organise the mega show in the ‘City Beautiful’. The basic intent behind putting up this show is to bring the best genres of furniture & home décor products not only from India but even abroad under one roof.
This time the residents of tricity & region who have a desire to spruce up their homes with the best furniture and interiors to ring in the upcoming festive season, the expo is offering a full fledged Thai Pavilion. The International Pavilion has nearly a dozen exhibitors from Thailand and Indonesia who are displaying a variety of home accessories, home décor products, furniture items, fashion accessories et al.
More than 70 exhibitors from across the country and abroad have put up their stalls at the expo. The Thai Pavilion is presenting jewellery items, purses, artificial flowers & home décor items from Thailand. Imported furniture from Indonesia is also attracting the visitors during the mega show. The section from Indonesia is displaying a wide range of beautifully designed furniture.
The exhibition is also showcasing an eye-catching range of antique furniture, heritage furniture, lamps, wall watches etc. Exhibitors from Jodhpur have brought unique handcrafted furniture. A Lucknow based exhibitor has brought Irani and Traditional carpets with breathtaking designs. The exhibitors from Agra are presenting marble based home décor items which include elephants, lions etc. Carved furniture, swings from Delhi and Chennai are also attracting eyeballs. There are exhibitors from Saharanpur which is known for its furniture industry and even Mumbai.
Speaking on this occasion, Lata Nair, Project Manager of I Ads & Events said that as the festival season is around the corner, the expo is a paradise for all the visitors who are looking towards refurbishing the interiors of their homes. This time we are also providing a one stop shop for all of one’s fashion needs too. There are a bevy of chic fashion designers who have put up their collections. Authentic Afghan dry fruits are also available.
A classy paintings’ collection, breathtaking murals, lanterns, vertical garden options, artificial flowers etc make the expo a must visit for people wanting something different for their homes. What’s more, gazebos too have been displayed. For kids, children furniture & upholsteries, blankets and throws, study tables, bunk beds etc are also available.
Other highlights of the expo include, dining sets, office furniture, ethnic furniture, decorative lamps & lights, pots, handicrafts, and a range of other decorative items.
It is noteworthy that the Expo has come to be known as the leading 'Design-Oriented' trade fair in the interior market of India.
So it’s time to upgrade your home with the largest collection of furniture, home decor, artifacts and more at ‘Furniture & Home Décor Expo 2019’ which is on till Sep 23 at Parade Ground, Sector 17, Chandigarh, daily from 10 am to 8:30 pm.
Posted by tricitynews online at 05:04 No comments: 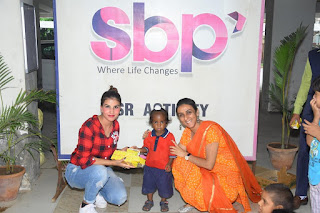 By Tricitynews
Chandigarh 20th September:- One of the leading real estate developer of Tricity, SBP group takes initiative for the wellbeing of lower segment of society by conducting a distribution drive at various places in the Tricity and its periphery. The group known for its quality affordable homes across Tricity has been working for the upliftment of society with different measures.
The group supports Mrs. Ritu Mehta, who teaches the kids of nearby slum area at her residence in SBP South City in Zirakpur. The group in support of their education distributed stationary and eatables among more than 60 kids. The group also supports women empowerment and conducts sessions for encourage women to become independent in their societies. Supporting the initiative the group donated 5 sewing machines to the women of slum area near its latest residential project, Housing Park in Dera Bassi to promote self-employment. The group also distributed groceries there.
While talking about the donation drive, Raman Singla, Vice President and Business Head of SBP Group said that our duty of being a developer does not just confine to building houses for people, but also we hold a responsibility towards our society. Being able to contribute towards the upliftment of the weaker sections of society is matter of great happiness and we are more than pleased to start this donation drive. We will continue this drive in future as well.
Posted by tricitynews online at 04:51 No comments:

By Tricitynews
Chandigarh 20th September:- The Electricity Employees of Chandigarh under the banner of the U.T. Powermen Union, Chandigarh today i.e. on dated 20.09.2019 held massive protest rallies before the electricity offices of Sector-15, 20, 23, Chandigarh. The rallies were held against the proposal of Chandigarh Administration to privatize the pro/fit earning and well running U.T. Electricity Wing of Engineering Department, Chandigarh and also against the negative and adamant attitude of the authorities of the Engineering Department, Chandigarh towards the long pending genuine demands of the electricity employees.
Gopal Datt Joshi, General Secretary of the Union and federation while addressing the rallies before the various offices strongly criticize the privatization policy of govt. of India and said that on one side Govt. of India time and again highlighting that only sick public sector /power sector which are in loss will be privatized but contrary to the statements and decisions of Govt. of India the Chandigarh Administration is privatizing the well running and profit making U.T. Electricity Department Chandigarh and implementing the failed structure like Orissa, Enron (Maharashtra) and Andhra Pradesh etc. One of other reason of privatizing of power sector was huge loss of SEBs which was Rs. 26000 Crores before the unbundling which was increased now to Rs. 10 Lakh Crore. But even inspite of 100% shortage  of staff and acute shortage of material the Chandigarh Electricity Department is earning approx.. Rs. 100 crores of profit. The department accredited as best utility in the country by the JERC and bagged the tag consistently for last 5 years. Most profit earning department never went into loss despite having no generation and compromising on contribution of states only. Best consumer services despite huge shortage of staff. Ratio of disposal of public grievances is much less than the standards fixed by the JERC. Line losses to the tune of 9% to 10% only, which is an example for the states. Achieved the proficiency level to the tune of 99.99% as per target fixed by JERC and G.O.I. Metered supply to the tune of 95% including slum / rural area. Minimum power outages in comparison to states. Regulating all the power outages and broadcast system of outages to the public domain, thus there is no need to privatize the department and demand that high level enquiry of the episode for which tenders are being floated time and again.
Dhian Singh, Acting President, Amrik Singh, Joint Secretary, Raj Pal, Secretary, Gurmeet Singh, Kashmir Singh and other leaders equally criticized the authorities of the Electricity Department for their negative attitude towards the genuine demands of the employees and blamed that the authorities remained fail to implement the most urgent demands like filling up of vacant posts, amendments in recruitment rules, grant of 9/16/23 Years time bound promotional scales and implementation of DC rates to ALMs engaged through outsource agencies beside others and further blame that the authorities instead of implementing the demands are promoting deputations in U.T. Electricity Department, Chandigarh and also trying to adjust Asstt. Engineers and Junior Engineers from states of Punjab and Haryana ignoring legitimate promotional rights of U.T. Cadre Junior Engineers and Asstt. Engineers and strongly demand that to withdraw the penal for deputation failing which union will lodge strong protest. Sukhwinder Singh, Ranjit Singh, Paramjit Singh and other leaders of concerned sub divisions also addressed the rally and appealed the employees to participate in massive protest dharna on 24-09-2019 being held before the Electricity Office, Sector-17, Chandigarh.
Posted by tricitynews online at 04:44 No comments: 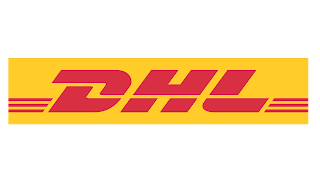 By Tricitynews
Chandigarh 20th September:- DHL Express, the world’s leading international express service provider, announced a price increase today that will take effect on January 1, 2020.
The average shipment price increase will be 6.9%. However, this increase may go up to 15% for shipments of cross border e-commerce, owing to higher costs of delivery.
R.S. Subramanian Country Manager, DHL Express India, said that at DHL Express, we constantly strive to deliver unparalleled quality and to keep serving our customers better. This means we need to make significant investments in infrastructure. He added that the annual price adjustment allows us to invest in new lower carbon-emissions aircrafts, improved hubs and facilities, as well as innovative technologies. This also includes development of top-of-the line sorting technology allowing us to handle increasing volumes and maintain market-leading transit times. DHL is also investing to stay fully compliant to the increasing regulatory and security measures globally. All these investments give our customers complete peace of mind when shipping internationally.
The prices are adjusted on an annual basis by DHL Express, also accounting for inflation and currency dynamics. Depending on local conditions, price adjustments will vary from country to country, and will apply to all customers where contracts allow.
Posted by tricitynews online at 04:38 No comments: 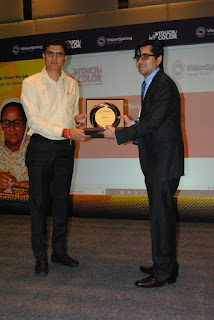 By Tricitynews
Chandigarh 20th September:- Clear Vision Punjab today organized a Symposium on Collective Action. The symposium is focused on how clear vision through eyeglasses can lead to tremendous benefits with respect to productivity, learning, and road safety. The event would be attended by High Net worth Individuals (HNIs) and senior leaders from Government, corporate, NGOs, family foundations, and hospitals. As the Government, organizations, and HNIs start focusing on long-term impact-driven initiatives, there is an emerging interest in potential collective action to mobilize resources and advance social impact.  On this occasion several Personalities were Honoured.
Anshu Taneja, Country Director Vision Spring said that in India, an estimated 55 Crore people require eyeglasses for vision correction leading to a loss of $119 Billion to the country’s economy. In Punjab, an estimated 1.4 Crore people require eyeglasses leading to a loss of $3 Billion to the state’s economy. He further said that thus, it is hugely important for all stakeholders to come together to brainstorm, partner, and mobilize resources to make Punjab the first Clear Vision State in India. Blurry vision compromises a person’s ability to work effectively, to learn in school, and to navigate surroundings safely. A simple pair of eyeglasses can create instant, measurable, and life-changing impact and can lead to up to a 32% productivity increase for an individual.
As Vision Spring, we have taken the lead to ensure we bring together like-minded individuals and organizations and the Government on a common platform. We believe this would help catalyze the journey towards the achievement of this ambitious mission. Let's make Clear Vision Punjab a reality.
Vision Spring (www.visionspring.org) is a social enterprise creating access to affordable eyewear, everywhere. VisionSpring provides end-to-end optical products and services, including eye-screening, training, and eyeglasses. Till date, VisionSpring has distributed more than 5.5 million pairs of vision-correcting eyeglasses, comprising ready-made readers and prescription eyeglasses, creating $1.18 billion in economic impact. In India, VisionSpring has distributed more than 3.5 million eyeglasses. VisionSpring reaches people using proven operational models and advances social impact along three themes: See to Earn (focused on communities, artisans, weavers, tea pickers, agricultural workers, workplaces, and factories), See to Learn (focused on school children and teachers), and See to be Safe (focused on truckers, bus drivers, cab drivers, mechanics, allied transport workers, and commercial vehicle drivers).
Posted by tricitynews online at 04:30 No comments: