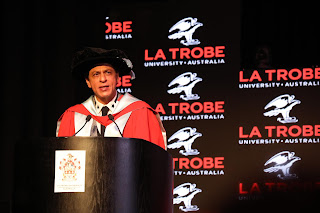 By Tricitynews
Chandigarh 10th August:- La Trobe University, today announced the Shah Rukh Khan La Trobe University PhD Scholarship, providing a life-changing opportunity for an aspiring Female Researcher from India to make a meaningful impact in the world.
Aligned to Shah Rukh Khan’s leadership on humanitarian and social justice causes, this prestigious four-year PhD scholarship aims to inspire a Female Researcher from India to undertake Research to help find solutions to the growing challenges of our time. The Scholarship is being introduced in recognition of Mr Khan’s dedication to Women’s Empowerment, through his Meer Foundation. Registrations opened today for Research candidates to submit their interest for the Scholarship by 30 August 2019. The successful candidate will be a Female Indian national, who has completed a Masters by Research Degree (or equivalent) within the past 10 years. The candidate will be supported with a four-year Research Scholarship valued in excess of $200,000 (AUD) to be completed at La Trobe’s state-of-the-art facilities in Melbourne, Australia. They will undertake Research supervised by the University’s leading Experts in Health, Sport, Information Technology, Cyber Security or Engineering.
The announcement was made during Shah Rukh Khan’s visit to La Trobe University as a Chief Guest of the 2019 Indian Film Festival of Melbourne. La Trobe is the first Australian University to Award Shah Rukh Khan with an Honorary Degree, Doctor of Letters (honoris causa), in recognition of his wide-ranging humanitarian work, including establishing the Meer Foundation to support and empower Women, who have survived acid attacks in India.
La Trobe Vice-Chancellor, Professor John Dewar, said Mr Khan’s philanthropic leadership drove the decision to create a PhD Scholarship in his name.
Professor Dewar said that the Shah Rukh Khan La Trobe University PhD Scholarship recognises Mr Khan’s extraordinary altruism, demonstrated in his work to advocate for Women’s Empowerment.
Shah Rukh Khan welcomed the announcement of a Scholarship in his name, said that reflecting La Trobe’s Values of Inclusivity, Equity and Social Justice, this Scholarship will offer a unique and potentially life-changing opportunity for an Indian Woman to conduct research in a critical area affecting the world such a Cyber Security, Health or Engineering.
Shah Rukh Khan said that as a passionate advocate for Women’s Equality and Empowerment, he is delighted that this Scholarship will give an Indian Woman a chance to pursue Research in a field, which is likely to lead her towards an exciting and successful career. He thanks La Trobe University wholeheartedly for giving someone this wonderful opportunity.
Posted by tricitynews online at 05:00 No comments: 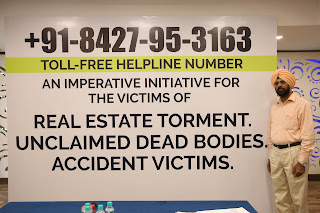 By Tricitynews
Chandigarh 10th August:- Alamjit Singh Mann, one of the renowned social activists of Punjab, since 1988 has been specifically working on amending the sufferings of accident victims and efficaciously helping the blind children and the orphans. He has also been performing the last rights of unclaimed bodies. He has also been extending the help with missionary zeal to the orphans and the blind children.
For his exemplary services, on 22nd November 2001, Alamjit Singh Mann was been awarded Rashtriya Ratan award in New Delhi. At the Independence Day function in 2004, he was also awarded Punjab Government State award and Parman Patra from Cap. Amrinder Singh, Chief Minister of Punjab.
Alamjit Singh Mann has also opened a 24-hour helpline for the above-mentioned victims. Recently, Alamjit Singh Mann has also announced to open a free music academy for the blind and the poor children on his land in Zirakpur.
He said that to make the people aware about this helpline which will also help the victims who suffered at the hands of the builders who promised them to give their houses/flats/plots in time but do not give them the possession of the property or delaying the construction of the houses of the victims. Many builders do not give the houses or plots and don’t even refund the amount. The home buyers pay to these builders by taking home loans from the banks and they are paying huge interests to the banks in the form of installments but still, they are unable to get their houses. And the builders use this money to spend on vacations and on expensive gifts.
According to the recent orders of the Honourable Supreme Court at the end of July 2019, the builders cannot delay while handing over the possession of the houses/plots/flats from the buyers or make them ready to refund the payment to the home buyers.
At this moment, Alamjit Singh Mann said that he has always been into social service because he doesn’t believe this is a service it is our responsibility towards our society. For this particular service, He will do all the arrangements including the advocates, meetings with the builders, documentation, etc. at his own cost. He has never taken any kind of donation and this service will be available free of cost. For this cause, he has a whole team of advocates and lawyers which will help them. Even in future, he will try his best to take initiatives that will be helpful for society.
Posted by tricitynews online at 04:53 No comments:

By Tricitynews
Chandigarh 10th August:- The Singapore-based Kathak danseuse Sunena Gupta gave her solo Kathak performance here today in a special Programme titled “Umeed” organized by Pracheen Kala Kendra at M.L. Koser Indoor  Auditorium, PKK complex, Sector-35, Chandigarh.
Sunena Gupta took kathak training at the tender age of seven. She has learnt under many Gurus in the past and is currently a disciple of the esteemed Guru Mulla Afsar Khan at the Singapore. Sunena performed across the globe, notably twice for the Indian Prime Minister Narendra Modi. She has also been blessed to train under Pt. Birju Maharaj and Smt. Saswati Sen as part of the Hemantika Festival in London and as part of the New York Kathak Festival in New York recently. Sunena is currently also a third-year student at the University of California, Berkeley, pursuing a degree in Politics and Economics.
Sunena’s most recent production “Umeed: Colors of Hope” Sunena has performed this production in Singapore, London and most recently in New York. In August, she will be taking her production to leading cities in India.
Today she performed her recent production “Umeed” exhibits Sunena’s passion for using dance to create awareness on social issues. She tells the story of mental health, chronic illness and self-image issues, based on her personal experiences, and hope to inspire change in society.
Umeed” is the Hindi word for “Hope”. Sunena Gupta, with the blessings and guidance of Guru Mulla Afsar Khan, presented a unique contemporary concept produced in the Indian classical dance form, Kathak. She tells the story of the journey of a young girl navigating her way through struggles with mental health, chronic illness and self-image issues. Through the artistic theme of colors, she compares her emotions of happiness, anger, fear, sadness, love and hope to the perception of different shades of colors. Sunena visions that with the telling of this story of hope, she can urge those who have lived this journey to hold out a helping hand, and those who are struggling to take one.
In the end of the programme Dr. Shobha Koser , SNA Awardee and Registrar of Kendra along with Secretary Sajal Koser honored the artist with bouquet , memento and scroll.
Posted by tricitynews online at 04:44 No comments: 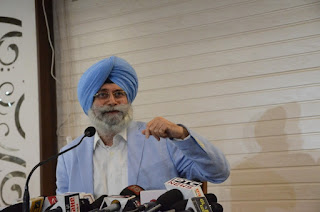