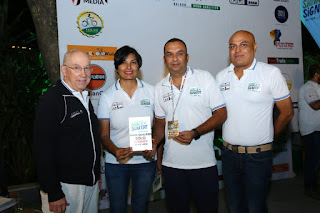 By Tricitynews
Chandigarh 21st October:- Shivaik Signature Ultra Race of 615 kms was held on 19th October and concluded at the same point at Sukhna Lake Sports Complex Channdigarh that led to all the major cities across Punjab like Hoshiarpur, Pathankot, Amritsar, Jalandhar , Ludhiana.
This Race is the qualifying Race for the World’s toughest bicycle Race-Race across America. This is the second edition of Race and the racers competed in this race of 615 kms. There were different categories of the Race- Solo and Team Events. Solo Race is the RAAM Qualifier.In Solo there were different age categories, 18-49 and 49+ The Racers taking part in the solo category of age group 18-49 had to finish 615 kms in 30 hours and that of 49+ age category in 32 hours. Rest, there were RAAM Style events in Relay style format that had to be finished in 28 hours.
51 participants registered for the Race in Solo and Team events out of which 9 participants qualified for Race Across America. In team category we had two teams in Team of 2 format and 2 teams in Team of 4 formats.
Results of RAAM Qualifier Shivalik Signature:
Solo Men (18-49): Atul Mishra from Nagpur won the Race in his category. He finished the Race in 25 hours 45 minutes.
Solo Men ( 49+):Balraj Singh Chuhan from Hoshiarpur won the Race in his category. He finished the Race in 27 hours 53 minutes.
Solo Women (49+): There was only one woman participant Ms.AnjaliBhalinge from Pune. She finished the Race in 30 hours 13 minutes.
In the event in the category
Shivalik Signature is an Ultra Race of 615 kms. and is  Qualifying Race for the World's toughest bicycle Race - Race Across America (RAAM that of 5000 kms.).
CEO of Race Across America Fred Boethling himself officiated in Shivalik Signature Edition II. Shivalik Signature organisers promoted ‘No Plastic Bottle’ slogan too. It was  compulsory for the Teams that they wouldn’t be using plastic bottles throughout the Race and will not litter on the way anywhere. If found so they were to be given penalty. Not only this year, this rule was last year also.
Ultra Races are endurance Races and very few people dare to take part in such events. Around 50 Racers had registered to take part in the Race, who came from different cities across the country like Gujrat, Rajasthan, Jammu, Delhi , Ganganagar and from Punjab itself. It’s interesting to note that maximum participants belonged to one city that is Hoshiarpur in Punjab which is a small township. In last 5 years, cycling in Hoshairpur has grown up like anything. It’s the result of hardwork of an NGO Punjab Bikers Club in which they have promoted cycling voluntarily by organising cycling workshops in schools and with different clubs of Punjab, weekend rides, short as well as long distance events, mass events like Cyclothon has changed the scenario. The main objective of NGO is to generate rural employment generation in the kandi region of Hoshairpur by promoting cycle tourism in the area. The results of this continuous hard workare now being shown on National level.
Posted by tricitynews online at 05:05 No comments: 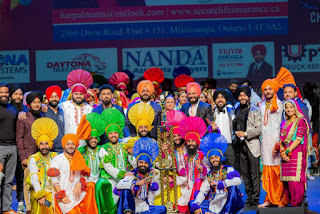