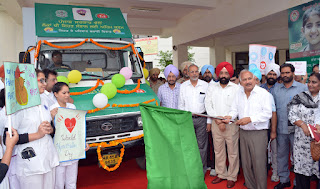 By Tricitynews Reporter
Chandigarh 31st May:- Health & Family Welfare Minister Punjab Brahm Mohindra here today launched a comprehensive health awareness campaign on Hypertension and flagged off van for awareness campaign that will cover the major village and towns of Punjab for 30 days to generate awareness on non communicable diseases.
Speaking on the occasion Brahm Mohindra stated that hypertension is the commonest non-communicable disease and it usually starts in the most productive age group that is around 30-35 years of age. As per NFHS-4, mild hypertension (140-159/90-99 mm Hg) is seen among 10.5% women and 17.4% men, while 2.7% women and 4.4% men have moderate to severe hypertension in 15-49 years age group. Another non-communicable disease risk factor study conducted by PGIMER, Chandigarh estimated that 40.1% population had raised blood pressure whereas it was higher at 61% (47% men and 31.5% women) in population aged 45-69 years.
Health Minister said further that Department of Health & Family Welfare has started screening of all individuals above 30 years of age under 'National Programme for Prevention and Control of Cancer', Diabetes, Cardiovascular Disease and Stroke. The screening is being done at population level through ANMs and at institution level by doctors. Till date 22, 68,537 individuals have been screened for these diseases and 5,35,620 (23.6%) persons have been found to be suffering from Hypertension. During 2016-17, on an average 1,13,160 individuals were screened every month out of which 14,250 (12.6%) were found hypertensive and put on treatment.
Brahm Mohindra said that the treatment for hypertension is available free of cost for everyone at all government health institutions. Any individual who is detected to be suffering from hypertension is put on treatment by the doctor and the follow up is given at the village level by ANM. All hypertensive are given medicine for one month at a time so as to minimize their visits to the health institutions.
Brahm Mohindra said that individuals suffering from Diabetes are more prone to hypertension, cardiac disease and stroke. It causes changes in the eye which may lead to blindness, affects kidneys, liver, heart as well as brain. Hypertension predisposes the individual to cardiac disease and stroke.
Health Minister further said that hypertension is caused by multiple factors including poor diet- rich in saturated fat, high salt intake, stress, lack of exercise, sedentary lifestyle, smoking and use of other forms of tobacco, alcohol intake and a positive family history. Health & Family Welfare Minister said that Prevention of hypertension along with early detection and timely treatment is very important for maintaining good health of the community.
Posted by tricitynews online at 05:45 No comments: 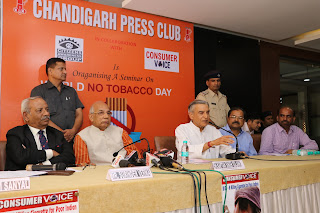 By Tricitynews Reporter
Chandigarh 31st May:- On the occasion of the World No Tobacco Day, Citizens Awareness Group in collaboration with Chandigarh Press Club took out a walk to make people aware about the ill effects of the substance use. The walkathon kick started from Press Club sector-27 crossing various main points of the city culminated at the club.  People carried placards that highlighted the bad effects of tobacco and exhorted people to build a tobacco free society. They also stopped at MRA Senior Secondary Model School and met the Principal Mrs Saroj Savant to spread the message among young students.
Later in the day, an awareness programme was held where experts shared their views.  As per Chairman of the Citizens awareness group Surinder Verma, that Tobacco and its ill-effects need to be highlighted in society. It is curse that the society needs to do away with. He added that if we need a healthy generation, we need to do away with this menace. We have taken pledge from people to say no to Tobacco to build healthy future.
Jaswant Rana, President of Chandigarh Press Club, also spoke on the occasion. Jaswant believed that nothing harms society more than tobacco that takes youth back to dark arenas. He said that youth should know that this is a thing that will not let them be healthy in a way effect their health and their family life in the long run.
While sharing his views, Ashim Sanyal, COO, Voluntary Organization in Interest of Consumer Education (VOICE) said that World No Tobacco Day is being observed from last 23 years and it has brought lot of changes in the mindsets. Our organization has been holding various awareness programmes in school and colleges so that youngsters don’t develop this habit at the young age.
Senior Congress leader and former union minister for Railways, Pawan Kumar Bansal said that tobacco consumption is roadblock to economic growth.
Governor of Haryana, Prof Kaptan Singh Singh Solanki was the chief guest at the event. While speaking on this significant day, Prof Kaptan Singh Solanki said that we have to No to Tobacco completely to fulfill the dream of a healthy society. He feels that the problem will not be curbed by laying only stringent laws but a widespread public opinion should be created. It can help strengthening will power which can go a long way to stop the menace.
Posted by tricitynews online at 05:35 No comments: 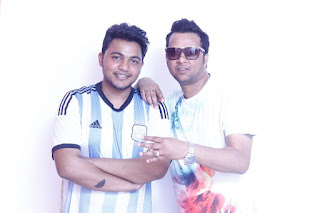 By Tricitynews Reporter
Chandigarh 31st May:- The Producer and Dj-Duo Twin Sync is a team of Dj Rdg and Sahil Saxena. They are Djs/producers from city beautiful Chandigarh who recently released their debut Endeavour EP worldwide on all major music platforms like, beatport, spotify and apple music.
Dj Rdg said that the concept behind EP Endeavour is to make people dance. Endeavour EP contains two tracks1. Endeavour, 2. Hypnotize. Endeavour is full of spark and exuberance track with heavy bass line which will give you rocking dance experience on the contrary Hypnotize is a melodic track with nice progression. He further said we are working on vocal version of these tracks and going to release in next month.
Dj Rdg stated that what made a huge difference in our career was the decision to start producing music together with Sahil Saxena. Before being a DJ was just a hobby. He had no plans to go big, but when we started producing music together under the name of Twin Sync, people began liking our music and then we decided to make some original tracks  & that’s how we make  Endeavor  EP. Shine OM Music record label gave us chance to release these tracks through their record label as Shine om music always encourage the upcoming Djs and artists to show their real talent worldwide.
Posted by tricitynews online at 05:25 No comments:

"World No Tobacco Day":DLSA Carried out Drive Against Tobacco 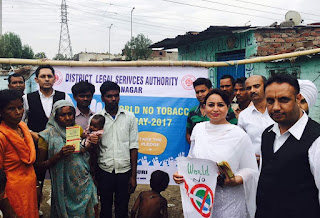 By Tricitynews Reporter
Chandigarh 31st May:- The District Legal Services Authority S.A.S Nagar has today on 31.05.2017 organized a Seminar on the occasion of "World No Tobacco Day".  A drive against Tobacco carried out by the team of Panel Lawyers and PLVs, who were sent to various slum areas, in order to sensitize the residents about ill effects and convince them to leave the use of drugs.
Mrs Monika Lamba, CJM-Secretary DLSA Mohali, flagged off the team of Panel Lawyers to the slum area near Industrial Area, S.A.S. Nagar, Mohali. Today a team of Panel Lawyers and Para Legal Volunteers reached out to poor and extremely downtrodden segment of the society in the slum areas and sensitized the residents about the importance of the day. Further, the team explained to them to get rid of this bad habit. At the same time, the Panel Lawyers and Para Legal Volunteers also went to different downtrodden areas spreading message about today's importance and about the facilities which are available in the Office of District Legal Services Authority, for weaker, poor and down trodden section of the society.
On the occasion of "World No Tobacco Day" Drawing Competition were also held in all government schools of District S.A.S. Nagar on the said topic, in which best two drawings of the students were selected and certificates of participation were also distributed to the children.
Posted by tricitynews online at 05:19 No comments:

By Tricitynews Reporter
Chandigarh 31st May:- The Department of Anatomy, PGI, Chandigarh received the body of  77 years old Dharam Vati  Maini R/o #702, Sector 11, Chandigarh,  as a donation today, who expired on 31.05.2017. The department is grateful to the family and admires them for this noble gesture.
Posted by tricitynews online at 05:13 No comments: 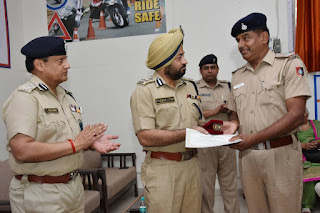 Posted by tricitynews online at 05:06 No comments: 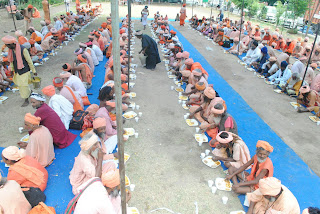 Posted by tricitynews online at 05:01 No comments: