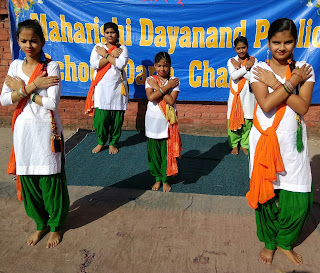 By Tricitynews
Chandigarh 04th October:- Maharishi Dayanand Public School Daria, Chandigarh organised a Debate with Collaboration of Environment Department, Chandigarh Administration on occasion of Wild Life Week. The students told through this competition that deforestation has created problem for wild animals. Chemical wastes and other garbage should not be thrown into the river as they may fatal for the wild animals. They told that the incidence of disease is increasing due to dirty pollution. Rahul, Vivek and Jai Sharma got first, second and third position.
Scouts and guides also performed folk dances of different states.
Principal Dr. Vinod Kumar told that tree plantation is necessary to protect rare species of wild animals. He gave away mementos and certificates to winners. 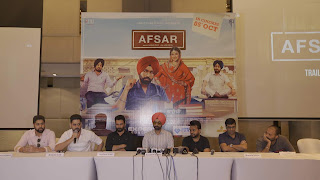 By Tricitynews
Chandigarh 04th October:- From the makers of Bambukat, Vekh Baraatan Challiyaan and Rabb Da Radio, nothing short of best is expected. These makers have rolled out some of the best films in the recent times, and it is the uniqueness in their concepts that’s usually considered to be their USP and the hallmark. This time they are coming up with a very unique concept in their upcoming film, “Afsar” which would narrate the tale of the importance of ‘Patwaris’ and ‘Kanungos’ in the villages of Punjab. Made under the banners of Nadar Films and Vehli Janta Films, its Producers are Amiek Virk Manpreet Johal and the Co-Producers are Tung Films, 7T1 Films, Next Level Productions and Harsimran Waraich.
The film is directed by Gulshan Singh, who is debuting as a Director, through his maiden project, “Afsar”. The story and the screen play has been written by none other than the renowned name, Jass Grewal and the dialogues have been written by Jatinder Lall. The worldwide distriubution is being done by the famous name, OmJee Group. The film stars the renowned singer and actor Tarsem Jassar and singer Nimrat Khaira in the lead roles along with Gurpreet Ghuggi, Karamjit Anmol, Rana Jung Bahadur, Hardeep Gill, Pukhraj Bhalla, Tarsem Paul, Gurpreet Bhangu also in the prominent roles.
The team of the film was in town today for its promotions and to talk about it. The Director, Gulshan Singh, said that Afsar” is actually a new and unique concept of ‘Patwaris’ (which is the lowest state functionary in the Revenue Collection System) in Punjab enjoys, Afsar highlights the ‘larger than life’, influence that these Patwaris have in the villages, often resulting in changing land records at will. Due to low levels of literacy, innocent villagers often think that they are even higher in ranks than Kanungos, wherein Kanungos are actually officers whose job is to supervise the conduct and the work of patwaris in their charge, and it is their duty to report the bad work or misconduct on the part of Patwaris. He further added that he is sure that the audience will like the film.
The lead actor Tarsem Jassar, said that it is an unusual script, the story is quite close to the real life and this will be another platform for him to show his real self.  He is sure that the as the audience has liked his previous films they will like this film also.
The Producers, Amiek Virk and Manpreet Johal also added that they are happy and enthusiastic to make a film which is actually so much close to the hard core fact and truth of the society, as the film carries a good storyline and they are happy to be associated with this project and they look forward for something good in Punjabi Cinema.
The music of the film has been composed by renowned and famous Music Director Jaidev Kumar, Preet Hundal and R-Guru. There are eight songs in the film for which the lyrics have been penned down by Tarsem Jassar, Arjan Dhillon, Harmanjeet and Gurbinder Mann. We will hear the soulful and melodious voices of Tarsem Jassar, Nimrat Khaira, Ranjit Bawa, Arjan Dhillon, Gurnam Bhullar and Karamjit Anmol.

By Tricitynews
Chandigarh 04th October:- Honda Motorcycle & Scooter India Pvt. Ltd., the 100% subsidiary of Honda Motor Company, Japan today announced that it will expand the annual production capacity of its 4th two-wheeler production plant.
Honda 2Wheeler’s fourth production plant is located at Vithalapur area in the western state of Gujarat near Ahmedabad. Inaugurated in February 2016 with a production capacity of 0.6 million units initially, the factory was expanded to 1.2 million capacity in June 2016.
Expanding the joy of riding with speed and vitality, Honda 2Wheelers will additionally invest 6300 million rupees to build a new production line within the existing plant site. The new production line will add 0.6 million units and increase the total annual production capacity of scooters only facility at Vithalapur to 1.8 million units by the year 2020.
This expansion will increase Honda 2Wheeler India’s overall annual production capacity to 7 million units by year 2020.
Elaborating on this milestone,  Minoru Kato, President & CEO - Honda Motorcycle & Scooter India Pvt. Ltd. said that over the years, Honda has been investing and expanding its capacity to enhance customer’s joy in the largest 2Wheeler market of the world. The additional capacity at our 4th factory reinforces our commitment to serve our customers faster, who have reposed their trust in brand Honda. 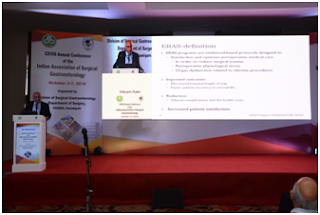 By Tricitynews
Chandigarh 04th October:- The 28th Annual Conference of Indian Association of Surgical Gastroenterology being organized by Division of Surgical Gastroenterology, Department of General Surgery, PGIMER, Chandigarh was inaugurated by Honorable Governor of Himachal Pradesh Acharya Dev Vrat on October 04, 2018. The Hon’ble Governor highlighted the importance of gastrointestinal tract for both health and diseases. He also welcomed the use of patient friendly minimally invasive laparoscopic and robotic surgeries but also stressed the role of proper training. The conference is being attended by 600 delegates from all over the country.
Today’s program was dedicated to Continuing Medical Education (CME) in the field of surgical gastroenterology where renowned national as well as international experts discussed the latest developments, treatment challenges, and its application in patient care. Dr William Lancastar from USA enlightened the delegates about the diagnostic and management approach of benign liver tumors and Prof Ernst Klar from Germany discussed the recent developments in the management of liver cancer. The recent treatment options for esophageal, gastric, pancreatic and gall bladder cancer were discussed by renowned national experts. The emerging role of laparoscopic surgery in various Biliary and pancreatic diseases were also deliberated in the CME.
Dr William Lancastar also highlighted the emerging role as well as future of pancreatic transplantation.
Dr Rajesh Gupta, Professor, Division of Surgical Gastroenterology, PGI, Chandigarh and the organizing secretary of the conference welcomed all the experts and delegates to the City beautiful . He said that the mission of this conference is to disseminate knowledge, foster research and training as well as encourage collaboration.
Posted by tricitynews online at 05:14 No comments: 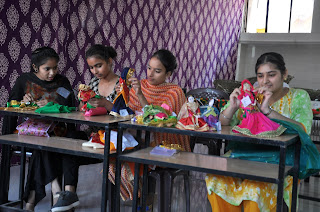 By Tricitynews
Chandigarh 04th October:- Day 2 of The Panjab University Youth and Heritage Festival, Zone-B, which is witnessing participation of 9 women  colleges of Chandigarh & Ludhiana, began with music instrumental items in percussion and non-percussion categories. It was a day where literary fervour was witnessed in the campus of Dev Samaj College for Women, Sec 45, which is hosting the mega fest.
A debate who's topic was  'Privatization of Education is beneficial for the society in India' was quite interesting. 9 Participants spoke in favor and other 9 spoke against the motion. An elocution competition was also held. Topic for elocution was 'Power of Media in present times'. 8 participants spoke on the topic. In Muhaveredar Vartalap, there were 21 participants and 8 took part in Poem recitation competition. The topic for creative writing was 'Maa' and there were 48 participants in this. ‘India of my Dreams' was the topic of the essay.
Apart from literary events, a lot of competitions were held under the category - Heritage Art and Craft. Competitions such as 'Guddian Patole', 'Chikku', 'Pranda', 'Naala' and 'Tokri' making created an ambiance of India's traditions. The girls were seen reviving the old & forgotten 'Art & Handicraft' forms. 'Mitti De Khidaune', 'Khiddo', 'Peerhi', 'Rassa' and 'Eennu' making were also conducted. An Indian orchestra added colour & excitement to the evening.
Jaspal Kaur, Principal, Dev Samaj College for Women, Sec 45, Chandigarh, said that Youth Festivals are perfect platforms that support and promote our traditional music and raise awareness about the diverse cultures of India. Indian folk music is very rich and the Youth & Heritage Festival going on at our college, is showcasing this quite well. What's more, the festival is providing a great opportunity to young girls, to showcase their talent in different fields.
Rakesh Kumar Popli, Additional excise and Taxation commissioner cum collector (Excise), UT, Chandigarh was the Chief Guest for the function. Also present on the occasion was Dr. Agnese Dhillon, Secretary, Dev Samaj Managing Committee. The Chief Guest encouraged the students to preserve the country's  traditional heritage and also gave away the prizes.

Posted by tricitynews online at 05:08 No comments: