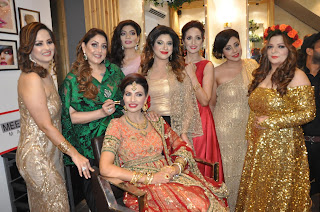 By Tricitynews Reporter
Chandigarh 17th November:- She has worked her Make Up magic on Actresses like Raveena Tandon, Hrishitaa Bhatt, Amrita Rao, Bipasha Basu, Tanushree Dutta, Sayali, Laxmi Pandit, Yukta Mookhey, Neha Dhupia, Yana Gupta et al. Meet Meenakshi Dutt one of India's most respected names in the field of Bridal Makeovers & bespoke Make Ups. Meenakshi Dutt was in Chandigarh where she unveiled a three storey Studio-'Meenakshi Dutt Makeovers', in Sec 10 Market. Meenakshi Dutt Makeovers Studio will have the Bridal Makeovers section in basement, ground floor will be dedicated to female section, the first floor will be exclusively for men  & top floor will have a Spa & Beauty section.
It is noteworthy that Meenakshi Dutt has chosen three well known Socialites of tricity - Neha Amit Singla, Dia Mittal & Neha Bamba for giving a franchisee for Chandigarh. This was done after searching for the appropriate people who had a passion, financial back up & entrepreneurial capability needed for the venture.
Meenakshi Dutt said that she is happy to have opened a spacious outlet of my chain 'Meenakshi Dutt Makeovers' in Chandigarh in collaboration with three very innovative women entrepreneurs from tricity.
About her style of Make Up Meenakshi said that she is always focused on the complete picture-the most appropriate hairstyle, cosmetics and accessories for each lady. Each element should be synergistic to create a unique portrait of total beauty and great style. That's my objective.
An exclusive preview of the stylish & first of a kind in the region studio-'Meenakshi Dutt Makeovers'  was organised for media. Meenakshi also did a model’s makeover to showcase her ravishing signature style. The event saw models beautifully decked up in bridal attire & looked attractive with the superior make up done by specialists trained by Meenakshi herself. Fashion label 'Hoonar' By Shalini was the wardrobe partner of the event.
Neha Amit Singla a Founding Partner , said that we will be offering the entire Make Over services that are available in other outlets of Meenakshi Dutt in Delhi. An emphasis will be on complete styling of women -the complete look will be catered to which will include Make Up, hairstyle, attire, accessories etc.
It is noteworthy that Meenakshi Dutt is known for both Indian & Western Bridal Make Overs & has been featured on NDTV's popular show 'Band Baja Bride' too. She also runs a highly successful Make Up Academy in Delhi.
Dia Mittal another Founding Partner of the Chandigarh Studio said that Meenakshi has worked abroad in countries like the UK, USA, Kuwait, Malaysia, Hong Kong, Mauritius etc & handled the Make Overs for red carpet events in Bollywood & Hollywood too. So the very rich experience of this Make Over Empress will now be available to the trendy women of tricity & the region.
With the Wedding Season round the corner Meenakshi Dutt Makeovers will fill up the space in this area quite well. Experts trained at Meenakshi Dutt's Delhi Studios will be attending to a bride's needs to make her look her very best on her day.
Neha Bamba the third Founding Partner summed up by saying that the services that we provide will effectively mould the Make Up with hair style. Trained experts will offer beauty care techniques & valuable tips.
Posted by tricitynews online at 04:31 No comments: 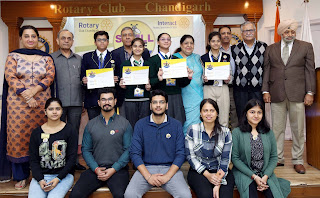 By Tricitynews Reporter
Chandigarh 17th November:- Sunaina Bakshi of DPS Sector 40 Chandigarh bagged the first prize in the first Rotary Spell Bee Competition held at Rotary House here today. Vani Adlakha of Aurobindo High School, and Saumya Rathore of Bhavan Vidyalaya Chandigarh, bagged the second and third prize followed by Rohan of St Johns’ in the fourth position.
Five schools of the city participated in the first Rotary Spell Bee competition including Aurobindo High School, Bhavan Vidyalaya, DPS Sector 40C, Sri Guru Harkrishan Senior Secondary Public School, Sector 40 and St John’s High School.
A team of two students each participated in the competition which had first round of writing down spellings, with final elimination rounds in oral.
Past District Governor Kawal Bedi presented the gifts and prizes to the winners.
Rtn Jatinder Kapur, Chairman of the Interact Committee, informed that all these schools have Interact Club in their respective Schools, which is the children’s wing of Rotary imparting leadership skills, and the Rotary Spell Bee was a part of the world-wide Interact Week celebrations.
Rtn Vinod Kapoor, who was the Spell Master at Spell Bee, said that this is a popular international event that helps in improving the vocabulary of the children as well as correct usage of the language. Besides this it helps in building confidence, developing inquisitiveness and positivity and also develops presence of mind of the children.
Rotary Spell Bee shall be an annual feature and shall be held at a much bigger scale, informed Secy Rtn Sartaj Lamba who was one of the judges with past president C.J. Singh of the Club.
Posted by tricitynews online at 04:10 No comments:

Traders and Vendors Conflict Should Be Resolved: Harmohan Dhawan 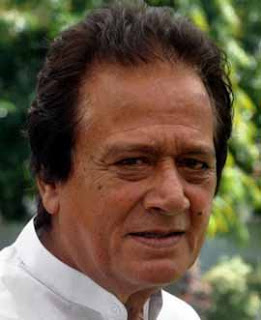 By Tricitynews Reporter
Chandigarh 17th November:- The former union minister & senior BJP leader, Harmohan Dhawan today strongly condemned the Chandigarh Municipal Corporation for the non implementation of the Street Vendors Act 2014. It is almost 4 years now that the MC has failed to identify the Vendors zones in various sectors. Both the traders & vendors have resorted to agitation & tension is building between them. Already heated exchanges have taken place in sec-22 & 19.
Harmohan Dhawan expressed his apprehension that if the problem is not solved it can take violent turn & the MC will be held responsible for this ugly development. He further urged the UT administration to intervene and resolve the problem to avoid the buildup of social tension between them. The administration should be responsive and sensitive to the citizen problems.
Harmohan Dhawan further suggested that for the amicable implementation of the street vendors act, the corporation should take the following points into consecration, Traders & vendors consent must be taken while identifying the vendor zones in various sectors. The vendor zones should be easily assessable to the costumers. The zones should not cause inconvenience to the general public. Public utilities like toilets, drinking water, parking and shelters form rain and sun should be provided.

Posted by tricitynews online at 03:59 No comments: 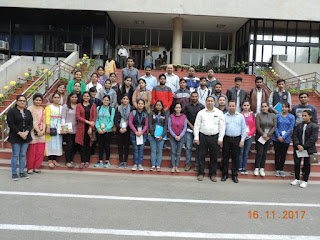 By Tricitynews Reporter
Chandigarh 17th November:- The Experimental Pharmacology Laboratory (EPL) under Professor Bikash Medhi, Department of Pharmacology, PGIMER, Chandigarh has ended 3 days “2nd Advanced Training Programme in Behavioral Neurosciences.” Prof. SS Sharma, NIPER, Mohali, Professor Prabha Garg, Mohali, Professor Kanwaljit Chopra, UIPS, PU and Registrar, PGIMER, Chandigarh were present in closing ceremony held in Lecture Theatre, Dept. of Pharmacology, PGIMER, Chandigarh. It was started in presence of Dean and senior faculties of PGIMER, Chandigarh and PU, Chandigarh at Nehru Hospital. PGIMER, Chandigarh.
Many eminent students and research scholars from all over India have attended the training programme. This 3 days programme has focused on neurobehavioral experimentation in pre-clinical and clinical aspects. According to the participants, this programme will be very helpful in routine evaluation of central nervous system experiments in both pre-clinical and clinical neural diseases. The first day has theme of imaging techniques in neuroscience research followed by the visit of participants to PET, MRI, Gamma knife facilities and Anatomy museum, PGIMER, Chandigarh. 2nd Day was focused on pre-clinical studies in neurobehavioral research which included UIPS, PU visit of delegates and practical demonstration on animals. The 3rd day was concluded with CSIC visit of the delegates followed by lectures on drug development in neural disorders from pre-clinical to in-silico development.
Posted by tricitynews online at 03:55 No comments: 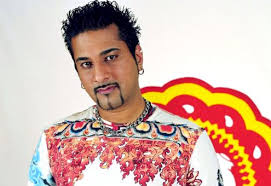 By Tricitynews Reporter
Chandigarh 17th November:- King of Bhangra Pop Bally Sagoo, who brought whole new genre of remix and hip Punjabi songs in India is all set to glorify FLYP@MTV Café in Chandigarh. The live performance is scheduled to groove all bhangra-pop lovers in the city beautiful, on Saturday, 18 November at Flyp@MTV Café, Madhya Marg, Sec 26, Chandigarh.
Be it the chill Noorie or the infectious Gur Nalo Ishq Mitha, the British-Indian producer’s upbeat Punabi songs and remixes have always had the fans and music lovers rocking to the music.
Posted by tricitynews online at 03:50 No comments: