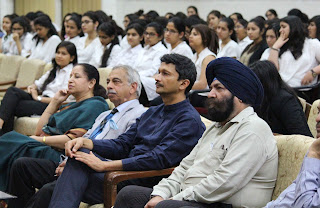 BY Tricitynews Reporter
Chandigarh 01st April:- Chandigarh based Think Tank- SUVICHAR- and Army Institute of Law (AIL), Mohali, organized a Seminar on the need for Legal Reforms with special emphasis on the Recruitment of Judges.
Legal luminaries and professionals debated on the issues so that the huge backlog of cases can be cleared, and suggested immediate action to balance out the ratio of judge’s vis-à-vis the population.
M L Sarin, Senior Advocate and a founder member of SUVICHAR was the key speaker on the occasion. Vivek Atray, Convenor, SUVICHAR, and three students of AIL also presented their point of view in the debate.
M L Sarin said that various studies have been carried out by the Law Commission and others to go into the question of clearing the huge backlog of pending cases and Supreme Court has given direction to the Government to provide better infrastructure and more manpower to the judiciary in each State so as to to increase the ratio of the number of judges to population and bring it as close as possible to the developed countries.
M L Sarin said that a criminal case takes 20 years or even more leading to uncertainty with wide spread speculations and holds true the common maxim ‘justice delayed is justice denied’.
Vivek Atray said that SUVICHAR is a forum of thought Leaders who have experience of and insight into various key sectors that are an integral part of our society’s functioning. SUVICHAR seeks to give back to society and the nation inputs and guideposts that can enhance the ability of people to deal with a plethora of issues and also to provide thought leadership in certain macro-level aspects of nation building.
Suvichar participants agreed that the procedure to be adopted in clearing names of the High Court and Supreme Court judges as laid down in ‘Supreme Court Advocates on Record Association case’ should be finalized at the earliest and delay of over two years in finalizing the procedure is already leading to backlog of pending cases.
The participants also agreed to establish an appropriate procedure to keep a tab on the judicial system on disposal and pendency of cases in courts.
Student of AIL Madhavi Sandhu participating in the debate suggested participation of all three wings, legislature, executive,  and the judiciary to infuse important safeguards into the appointment process.
Ayushi Vashisht suggested scrapping the 20-years old system plaguing the Indian judiciary and restoring NJAC which ensured appropriate checks and balances which institutionalized the system of appointment of judges in a transparent way without favouritism or nepotism.
Kudrat Dutta Chaudhary opined that constitution of an Indian Judicial Service could be another workable option to create robust judicial system to identify meritorious students through competitive examination and ensure quality standards through uniform training procedure.
Posted by tricitynews online at 04:48 No comments: 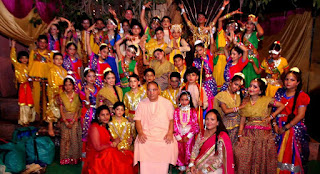 Posted by tricitynews online at 04:43 No comments:

MCM organizes Havan and Talk on Evolution of Temples 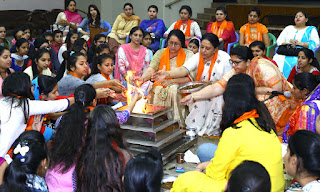 BY Tricitynews Reporter
Chandigarh 01st April:- The Arya Yuvti Samaj of MCM DAV College for Women organised a Havan here today under the aegis of the Arya Samaj Committee of the college. Havan was organised as a part of the monthly activity of the Arya Yuvti Samaj which works towards promoting and upholding Indian Vedic Sanskriti among the youth through it's various programmes. The spiritually cleansing ritual of havan was followed by Declamation competition on the theme ‘Value of Ethics in Life’ where the participants presented enriching viewpoints on the importance of ethics from the point of personal, social and spiritual development. Kajal Dubey (B.Com.I) won the first prize in the competition, Preeti (BAI) stood second and Neha was adjudged third.
In another event, the Department of History of MCM DAV College for Women organised a talk on ‘Evolution of Temples’ by Dr.Renu Thakur, Associate Professor, Department of History, PU. The talk aimed to reinforce the importance of archeological sources in studying the various aspects of Ancient Indian History. In her highly informational talk, Dr. Renu traced the evolution of temples in India right from tree worship to open air temples to huge, majestic temples.
Underlining the emphasis laid on the holistic development of the students at MCM through a unique amalgamation of world-class education and inculcation of values, MCM Principal Dr. Nisha Bhargava said that such activities are designed to nurture women achievers who have a strong value system.

Posted by tricitynews online at 04:39 No comments: 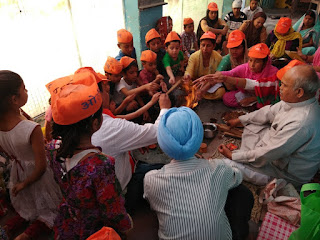 BY Tricitynews Reporter
Chandigarh 01st April:- The new session of Maharishi Dayanand Public School Daria, Chandigarh, was begun today with performance of Vedik Yajna. It was attended by members of the staff and students along with their parents.
Pandit Sandeepan Giri wished a bright future to the school and the students. He said that hard work, strong determination and constant efforts lead towards success.
Pandit Sandeepan Giri threw light on the importance of yajna and its multifarious benefits for the humanity. There is a dire need of continuation of the the Indian cultural values and traditions, he added.
Principal Dr.  Vinod Kumar inspired the students and urged the members of the teaching staff to put in their best efforts for the welfare of the society.
Posted by tricitynews online at 04:30 No comments:

Marriage Drama Ahead for Sanjana in YARO ka Tashan 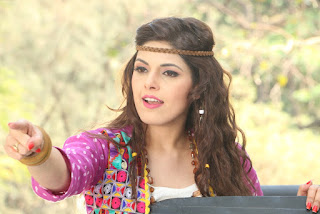 BY Tricitynews Reporter
Chandigarh 01st April:- Sony SAB’s YARO ka Tashan is taking an interesting turn with YARO falling in love with Sanjana. While YARO is trying all possible ideas to impress the love of his life Sanjana, her father, Goga is also chasing Sanjana to fix her marriage with a rich guy named Ranjeet. Now YARO’s love story will have a new obstacle i.e the rich and suave Ranjeet.
In the upcoming track of the show we will see that Goga (Gopi Bhalla) introduces Sanjana (Shubhi Ahuja) to Ranjeet as an eligible prospective groom for her. Since Ranjeet is rich, Goga wants Sanjana to marry him. Goga warns Sanjana to behave nicely with Ranjeet so that he gets convinced to marry her. Sanjana, on the other hand promises, in a way challenges Goga that if Ranjeet agrees to marry, she will get married to him. Goga invites Ranjeet at his house and the entire family waits for Ranjeet to arrive. On Ranjeet’s arrival, Sanjana tries different ways to threaten Ranjeet. Her only motive to threaten him is that he will get fed up and will eventually refuse to marry her. But here surprisingly Ranjeet thinks that she is the perfect match for him and agrees to marry her.
Commenting on the track, Shubhi Ahuja who plays Sanjana said that Sanjana is trying her level best and behaving her worst so that Ranjeet rejects her, but much to her amusement Ranjeet likes her and agrees for the marriage. Now the biggest task ahead of Sanjana is to break this marriage proposal. It will be interesting to see the girl who love kicks in her life will be able to give Ranjeet a kick or will she fall prey to her dad’s demands.
Posted by tricitynews online at 04:24 No comments:

BY Tricitynews Reporter
Chandigarh 01st April:- Hit  with his previous song ‘Photo’, young Punjabi singer Karan Sehmbhi today reached Chandigarh for promoting his new song ‘Bombshell’. The song was released by T-Series. Sara Gurpal has acted as model in the song while Preet Hundal has given the music. Aman Grewal has written the song and Jashan Nanadd has prepared the video of the song.  Over one lakhs viewers had seen the video on youtube.

While interaction, Karan said that his previous songs–Photo, Naam and one more album got shortlisted and received enormous amount of love from audiences. While narrating about his career, Karan said that singing has hobby since childhood and by the time entering the intermediate, he participated in many functions in school.  Apart from that, he was one of the finalists at PTC Voice of Punjab–Season 2. He said that it is very important to reach to our audiences apart from being in online and social media so that you can have the right opinion weather your song become their favorite or not.


He said that he belongs to Ludhiana and coming to Chandigarh from past six years. He has done his BSc Interior Designing from Chandigarh.
Posted by tricitynews online at 04:19 No comments: