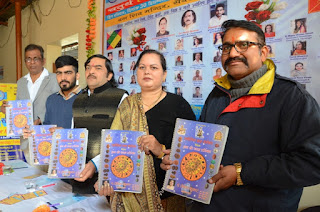 Posted by tricitynews online at 04:31 No comments: 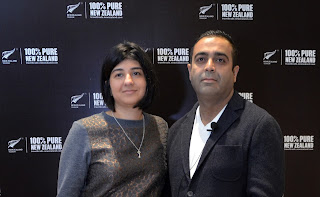 By Tricitynews
Chandigarh 27th December:- New Zealand’s prominent chef and restaurateur, Sid Sahrawatalong with his wife Chand Sahrawat are in Chandigarh to share their New Zealand journey with the media today and to provide their children a glimpse of their cherished Indian culture.
Today, they are building a legacy in New Zealand which comprises three award winning restaurants – Sidart, Cassia and Sid at The French Café.
Hailing from a small town in Mohali, Sid went to Yadavindra Public School.  Returning to the city of Chandigarh, he says, brings back a lot of fond memories of friends, cricket and growing up.  Talking about his Indian roots, Sid Sahrawat said that his fondest memories are of his grandmother making parathas for breakfast and his grandfather teaching him maths. His father was in the Indian Army, so he have learnt a lot of discipline that he need to run three kitchens from his time with him. His love for Indian food comes from growing up in India and travelling to different places with his dad through his postings.
Sid has spent almost nine years making his indelible mark in Auckland with acclaimed restaurants Sidart and Cassia. He is known to reflect seasonality in his dishes and use the freshest of ingredients. He infuses his creative culinary skills with the traditional dishes he has grown up with in India–classic spice and flavour combinations reworked with contemporary and local New Zealand ingredients.
Sid Sahrawat won best chef and he along with his wife Chand won best restaurateurs at Metro Peugot Restaurant Of The Year 2018 Awards. Also, Sidart and Cassia won the first and the second spot for the restaurant of the year at the awards. Sidart was awarded 2 Hats this year with Cassia winning the Best Metropolitan Restaurant at Cuisine Good food awards 2018. Additionally, Sid at the French Café and Sidart are the highest rated restaurants in New Zealand to feature in LA LISTE world’s best restaurants, among top 500 in the world.
At a media event in Chandigarh today, Sid served one of his signature dishes-traditional Indian tandoori chicken in slider buns. These mini burgers serve as an excellent snack and are a great choice for parties and are his daughter Zoya’s favourite.
Speaking at the event, Sid said that the only hurdle he faced in New Zealand, was changing people’s perception about Indian food. Most Kiwis relate to Indian cuisine as butter chicken which is quite sweet and creamy. But today, with two successful Indian restaurants, Cassia the modern Indian and Sidart progressive Indian, a lot of kiwis have moved away from that notion and experiment more with Indian cuisine. Both restaurants showcase the best of New Zealand’s produce in a contemporary Indian format that is more formal and precise execution of the cuisine.
The evolution of his restaurants reflects his identity as a chef. He beautifully ties his Indian roots to the progessive taste of New Zealand’s appetizing flavors.
Though work takes over most of Sid and Chand’s time, they do make time for holidays, he love to take friends and family to Waiheke Island, a short ferry ride from Auckland, to explore the beaches and vineyards.  Paihia in the Bay of Islands holds a special place in his heart as he worked there for a few months as a young chef: the beauty of Northland is unique and unparalleled.  Rotorua is a great stop to explore not just the thermal pools but to partake in a traditional hangi in a Maori village and Queenstown as we all know is breath-taking for its views of the mountains and lakes.
Sid said that through the ups and downs of his journey, his main pillar of strength has been his wife, Chand Sahrawat as she shares his passion for food and has adapted to the industry very well. Her family background in business helps them make key decisions together.
Sid’s restaurants are at the peak of success and a testament to a combination of passion, talent and hard work. 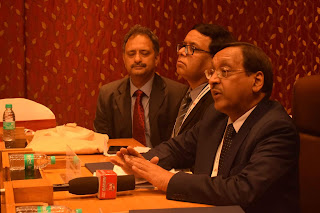 By Tricitynews
Chandigarh 27th December:- Petroleum and Natural Gas Regulatory Board (PNGRB) organized a roadshow for promoting 10th City Gas Distribution (CGD) bidding round here today.
Petroleum and Natural Gas Regulatory Board (PNGRB) is the nodal agency for facilitating economic activities in natural gas distribution with the objective to promote competitive markets, create infrastructure and increase share of natural gas in country’s energy mix.   PNGRB has so far successfully concluded 9 CGD Bidding Rounds for selection of authorised entities for development of City Gas Distribution (CGD) networks in their Geographical Areas (GAs).  The recently concluded 9th bidding round for 86 GAs covering 174 districts in 21 states/ UTs was a huge success attracting interest from investors in all offered GAs.
The 10th CGD Bidding Round offering 50 GAs was launched by Hon’ble Prime Minister, Shri Narendra Modi on 22nd November, 2018 at Vigyan Bhawan, New Delhi.  This roadshow is the 1st in a series of roadshows being planned across India by PNGRB over next 3 weeks and witnessed participation from the senior Government officials, oil and gas companies, industry and academia. Depinder Singh Dhesi, Chief Secretary, Govt. of Haryana was the Chief Guest.
At present, CGD authorization has been given by PNGRB in 10 GAs in state of Punjab covering 13 districts namely SAS Nagar, Patiala, Sangrur, Ludhiana, Barnala, Moga, Jalandhar, Kapurthala, SBS Nagar, Amritsar, Bhatinda, Rupnagar, and Fatehgarh Sahib. In the 10th CGD bidding round, 3 GAs covering 6 districts- Mansa, Ferozepur, Hoshiarpur ,Faridkot, Sri Muktsar Sahib and Gurdaspur are being offered. 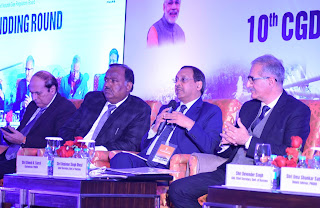 CGD authorization has been given by PNGRB in 13 GAs in state of Haryana covering 16 districts namely Sonipat , Panipat, Yamunanagar, Rewari, Rohtak, Karnal, Ambala, Kurukshetra, Panchkula, Bhiwani, Charkhi Dadri, Mahendragarh, Hisar, Jind, Nuh and Palwal. In the 10th CGD bidding round, 2 GAs covering 3 districts of Sirsa , Fatehabad and Kaithal are being offered. It may be noted that a total of 4 GAs are on offer for both the state combined with Sirsa, Fatehabad (Haryana) and Mansa (Punjab) Districts grouped in 1 GA.
After the 10th round, States of Punjab and Haryana and UT of Chandigarh would be fully authorized for development of CGD Networks.
This is a big initiative towards providing clean energy to the users in Haryana, Punjab and UT of Chandigarh. In the presentation on the 10th CGD bidding round, PNGRB highlighted the opportunities in the oil and gas sector in India and in the CGD business in particular. India's story in the natural gas sector, increasing domestic production and LNG imports to meet gas demand ; along with the country’s commitments at COP21, has pushed the Indian government to bring in sweeping policy changes that are giving a boost to the domestic gas market.
The roadshow was marked by the presence of Depinder Singh Dhesi, Chief Secretary, Govt. of Haryana. Depinder Singh Dhesi mentioned that similar to transition from GSM to 4G, the Energy Sector is also in transition Phase from Petrol, Diesel to PNG. He added furthr that under the aspirational district program of Niti Ayog, Palwal and Nuh have been taken up as backward districts for focused intervention by various departments and he make a special request that roll out of scheme in district Nuh be taken up on priority.  Depinder Singh Dhesi said that PNGRB needs to be complimented for the proactive approach it has taken to roll out this program and he is confident that for the 10th round also, the industry would respond with great enthusiasm.  He said that this initiative by PNGRB would provide benefits to the people of Haryana, and the Government of Haryana would provide all the necessary support required to fructify this plan.

Posted by tricitynews online at 04:07 No comments: