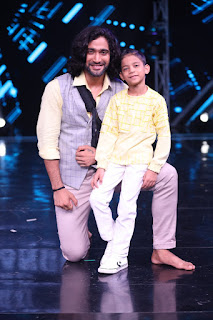 By Tricitynews
Chandigarh 19th April:- Sony Entertainment Television’s Super Dancer Chapter 3 has been one of the most loved kids dance reality show, ever since the start of the season. The show has got the audiences hooked with amazing dance performances by the young contestants which lead to constantly topping the TRP charts. This week the viewers will get to see quite a shocking change in the season. This time around the kids and their Gurus have been swapped and the result of which is for everyone to experience.
Tejas who is known for his swag and street style dancing will be seen performing with Super Guru Sanam bringing forth a contemporary style. It was surprising and quite heart-warming to see Sanam performing with an injured hand. Wearing a sling, Sanam went ahead and showcased beautiful lifts with Tejas.
A source close from the sets added that Sanam was on fire. In spite of injuring his hand, he brilliantly put up a grand performance which was applauded by everyone on sets. Out of the judges, Shilpa Shetty Kundra was visibly shocked that she ended up saying, ‘Kaun keheta hai ki taali ek haath se nahi bajti.”
Sanam who was visibly cheerful and high on appreciation said that he is risk taker and he tried to choreograph it smartly in a way that his left shoulder doesn’t get affected. He is happy and obliged with the fact that everybody appreciated our performance not out of sympathy but because we gave our best. He further added that Shilpa Ma’am was very happy and appreciated the performance. More than that Tejas is also a very brave contestant on the show and he is glad he kept his trust intact.

Posted by tricitynews online at 06:21 No comments: 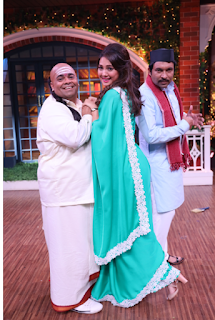 By Tricitynews
Chandigarh 19th April:- The legendary singer Kishore Kumar was an evergreen personality who will be always remembered for his mesmerizing songs. Sony Entertainment Television’s most followed comic reality show The Kapil Sharma Show recently gave tribute to the late Kishor Kumar. The show is known to bring interesting tales every weekend to amuse its audience. The upcoming episode of the show will see Kishore Kumar’s wife Leena Chandavarka and his son Amit and Sumit Kumar having amazing time revisiting Kishore Kumar’s memories.  Amit Kumar set the mood on the sets by singing one his most loved song, ‘Bade acche lagte hain’.
During the show, Kapil Sharma, describes Kishor Kumar as one of the best singers the industry ever had and his comic timing was unmatchable. He also reveals that along with him, many are not aware that the original song, ‘Bade Acche Lagte Hein’ was actually sung by Amit Kumar and not Kishore Kumar. Kapil said that he wants to confess something. He is very much in love with the song, ‘Bade Acche Lagte Hein’ but he didn’t know that it was sung by Amit Kumar. All this while he thought this was Kishore Da’s song.
Further, in the conversation, Amit Kumar shared that getting the chance to sing ‘Bade Acche Lagte Hein’ from the film Balika Badhu wasn't easy for him.  He wasn’t an established singer at that time. Pancham Da and Shakti Kapoor were very optimistic about his voice and were instrumental in getting this song to him.  Moreover, Shakti Da beleived that only he can do justice with this beautiful song and insisted the team that ‘Bade acche lagte hein’ should only be sung by him.
Later in the show, on Kapil Sharma’s demand, Amit sang the entire song and revive the magic of the beautiful song.

Posted by tricitynews online at 06:12 No comments:

By Tricitynews
Chandigarh 19th April:- The election campaign of Congress Lok Sabha candidate from Chandigarh Pawan Kumar Bansal received a big boost on Thursday when influential ex-Bahujan Samaj Party (BSP) leaders Jannat Jahan and Anwar-ul-Haq joined the party, even as senior party leader Manish Tewari, who was a contender for the party ticket from Chandigarh, extended his full support to Bansal and cricketer-turned-politician Mohammad Azharuddin batted for him.
Speaking at the joining ceremony organised at Congress Bhawan on Thursday, Jannat Jahan said she had been inspired by the new look pro-poor, pro-minorities manifesto released by Congress President Rahul Gandhi. She said Bansal was always winning this election, but with her entry the margin of victory will increase.
Former Union Minister and National Spokesperson of the party Manish Tewari, who is now the Congress Lok Sabha candidate from Anandpur Sahib constituency, said once the party had decided on the candidate, all other contenders were in the election campaign together. He said he and his supporters will fully support Mr Bansal to the best of their abilities.
Former Indian cricket captain Mohammad Azharuddin while wishing Jannat Jahan and Anwar-ul-Haz all the best in their new innings, in a lighter vein said “They had come from playing on a “kachchi pitch” to and “acchhi pitch.”
Bansal welcomed the minority community leaders into the party fold and said with their entry the party’s campaign in Chandigarh will get a big boost.
Among others present were Punjab Minister Charanjit Singh Channi, Punjab Congress MLA Kuljit Singh Nagra, Chandigarh Congress President Pardeep Chhabra and senior leaders Subhash Chawla, Devinder Singh Babla, Harmohinder Singh Lucky and Gurpreet Singh Gabi.

Posted by tricitynews online at 05:53 No comments: