By Tricitynews
Chandigarh 05th December:- Chandigarh based production house Ryan Media has recently released its new dancing number titled “Patlo Glass Wargi”sung by the skilled singer of the industry Sahib. To grace the occasion, renowned music icon Ashok Masti and Gurnazar Chattha were present along with Pravesh Sharma and his wife Navneet Kaur Sharma, owner Ryan Media Productions.
Addressing the media, Sahib said that singing has always been his first love and being able to do it as a profession is nothing short of a blessing. He is a fun loving and chilled out person and he guess that is something which is reflected in the type of songs he sings. “Patlo Glass Vargi” is a Bhangra dance song which he is sure the audience, would love. He would also like to thank the entire team of Ryan Media who has helped him realize this smashing dance number. Special thanks to music icon of Punjabi industry Ashok Masti and Gurnazar for their presence here to encourage the entire team.
Sahib’s strong vocals have already won the hearts with his previous released track ‘Pichcha Na Chadd Di Daaru’ with Punjabi MC. Also, one cannot forget his huge fanbase of UK.
Patlo Glass Wargi’s video has been directed by WHIZ in London. Music has given by Music Empire and the lyrics have been beautifully penned down by Binder Nawepindiya.
Posted by tricitynews online at 05:15 No comments: 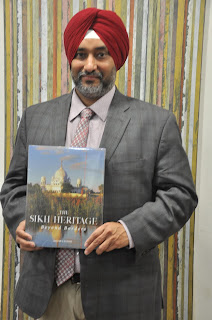 By Tricitynews
Chandigarh 05th December:- It was his long-standing passion and curiosity, which took a US-based dentist, Dr. Dalvir Singh Pannu all the way to Pakistan to study 84 Sikh heritage sites and shrines to unearth the narratives of Sikh historical and religious places displaced during the India–Pakistan partition of 1947.
It took Dr. Dalvir Singh Pannu 11 years to complete his book on the subject - ‘The Sikh Heritage – Beyond Borders’. Dr. Pannu has encapsulated his painstaking research in the unique treatise which was released during the press conference held at Press Club, Sector 27, here.
46-year-old, Dr. D S Pannu, who initially practiced as a dentist at Phagwara, near his village Pharala in Nawanshahar district in Punjab for about two years before moving to the United States said that his book is different from regular documentation on the subject. The main reason for this is his study and gathering of details from sources in Farsi and Urdu on the monuments and tallying these with information obtained from Indian law reports in British archives available. The idea was to study narratives of different language sources. This way he learnt a lot about what others like Mughals, Persians, etc also thought about Sikh monuments.
The author adopted the process of doing extensive analysis and cross-referencing with other sources to enable readers to comprehend Sikh history. The system included posing inquiries, applying critical thinking, and investigating hundreds of sources.
Dr. Pannu added that the book dedicates one chapter each to the 84 sites that it documents. More than 60 of these are gurdwaras established in the name of the first six Sikh gurus, who had visited Pakistan. Today, these monuments stand out as symbols of the peaceful and harmonious past lives of people sharing a heritage, whose affinities go beyond physical borders and territories.
He briefed that the book has documented decade-long fieldwork of finding and exploring different historical accounts on the same events. For instance, he explains, the Janam Sakhis (hagiography/birth and life journey story) contains details about the miraculous powers of the Sikh gurus. Dr. Pannu said that he engaged a large team of professional photographers and he visited Pakistan twice in 2008 and 2016. We also got drone photography and videography of the identified sites done.
The author includes a multitude of primary sources and Gurumukhi inscriptions, translated into English, to increase heritage-lovers’ understanding of these sites and to help preserve their beauty and histories through his writing.
Dr. D S Pannu said that he would take this opportunity to request Shiromani Gurudwara Parbandhak Committee (SGPC) and other Sikh bodies, to include the book in their libraries so that those interested are benefited by the ready availability of the book. This way the rich Sikh culture and heritage will not only be preserved but also propagated in the right earnest.
Posted by tricitynews online at 04:55 No comments: 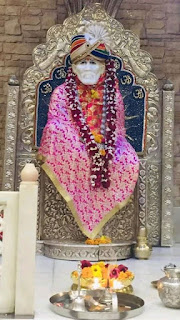 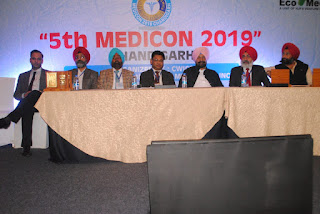