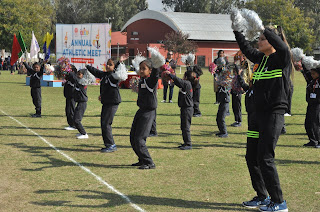 By Tricitynews
Chandigarh 16th Feb, 2019:- Paragon Kids school, sector-71, Mohali organized its annual athletic meet at sports complex, sector-7, Chandigarh. Sukhwinder Singh Tinku, a renowned cricket coach was the chief guest. The chief guest was welcomed by Kulwant Kaur Shergill, President, Paragon Kids & Mrs. Bawra Shergill, Chief Administrative Officer (CAO), Paragon Kids.
The programme began on a high note with a well coordinated march past by the kids. The athletic meet saw torch bearers taking a lap of the ground with the torch and lighting the Cauldron of the sports meet. An oath, to ensure fair play and true sportsmanship was administered.
Mrs. Bawra Shergill, said that we included creative and fun competitive activities and races. The idea was to provide them a platform to show their athletic prowess and also have fun at the same time. She shared further that sports is an integral part of the curriculum at Paragon Kids and we focus a lot on developing sporting skills' in children at a very young age, so that their talent can be pin pointed & honed as they grow up.
The little athletes gave a breathtaking aerobic performance on musical notes. The budding sportsmen of Paragon Kids from classes Play way to IInd displayed zestful performances in various sporty activities & races like Bugs Bunny leap, ball cone cornetto, jelly fish race, leap frog spring, giant Nemo waterway, backpack dash, pea pod shelling , paper plate roll toss, knot in the ribbon etc.
In the end the chief guest and dignitaries appreciated the kids' hard work, spirit and strength which belied their age, by honoring them with medals and trophies.

Posted by tricitynews online at 04:06 No comments:

By Tricitynews
Chandigarh 16th Feb, 2019:- With a goal to rid Punjab and the country of the menace of drugs and its consequences, Chandigarh is gearing up to host the launch of Drug Free India campaign, one of Art of Living's many important initiatives in the field of deaddiction awareness and advocacy. The event will be held at Chandigarh University on the 18th February at 11AM and at Guru Jambeshwar University, Hisar Haryana with the support of Government of Haryana on 19th February.
The dignitaries to be present include Gurudev Sri Sri Ravi Shankar, Founder of The Art of Living, and Governor V P Singh Badnore, popular youth icon and actor Sanjay Dutt, comedian Kapil Sharma, rapper-singer-songwriter Badshah.
An estimated 40 thousand students will attend the event on both the days and thousands of colleges have signed up to connect via a live webcast, where all the participants will take a collective pledge against drug abuse.
More than 90 eminent personalities from the field of entertainment, sports, politics and business have extended their support to The Art of Living’s fight against drugs.
Hima Parikh, trustee of the Art of Living and a key organiser of the event in Chandigarh, said that we are happy to have received tremendous support from influencers from all walks of life. With guidance of Gurudev Sri Sri Ravi Shankar we want to take this campaign to youth across the country to put an end to this menace. We cannot see our youngsters losing their lives to drugs and remain mute spectators anymore. And so, this campaign was the need of this hour.
Part of the initiative includes formation of SWAT (Social Wellness and Awareness Training) clubs that have been opened across college campuses that comprise of students, teachers, doctors and social workers who will spread the word against drug abuse throughout the year and organize programs that will act as preventive interventions for youngsters to stop them from getting into drugs in the first place.
While addressing the media, DP Singh, Senior Executive Vice President, Chandigarh University said that Punjab has always been front-runner in leading any revolution in India, be it India's Struggle for Independence, Green Revolution and it is again good to see that the state of Punjab leading the nation waging a war against drugs and that too under the leadership of Shri Shri Ravi Shankar ji. Chandigarh University is proud to be part of this great initiative and would continue to work with Art of Living Foundation in making India Drugs Free.
In the past, The Art of Living has also collaborated with leading drug de-addiction and treatment centers like PGIMER, where Art of Living deaddiction and intervention programs have been organized for the inmates, who have reported encouraging results in dealing with addiction and its consequences on the mind, by practicing the techniques taught in the programs with regular follow-ups.

Posted by tricitynews online at 03:33 No comments: 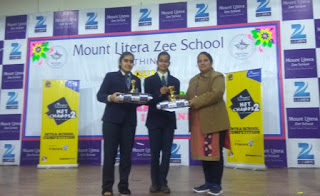 Posted by tricitynews online at 03:23 No comments: