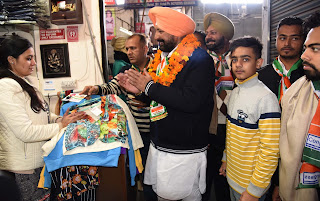 By Tricitynews Reporter
Chandigarh 19th January:- Focusing his election campaign in Mohali town , Balbir Sidhu the Congress candidate carried out a campaign at Phase 3B1 market here this morning .
Balbir Sidhu said that after coming to power his party will turn Mohali into a model city. We have certain plans and ideas to turn Mohali a town that can be an example for other. Balbir Sidhu shared Congress poll manifesto with shopkeepers besides discussing their problems.
Later Balbir Sidhu carried out his election campaign at Amb Sahib Colony where he held meeting with a large group of local residents. In meeting, Balbir Sidhu informed residents about Congress policies for poor.
During occasion the residents of colony apprised Balbir Sidhu of their problems. Balbir Sidhu assured them to solve their all problems after the formation of Congress government in Punjab. He said that the Congress government will provide basic amenities to colonies residents that are inside the Mohali town.
Congress has always protected rights of poor and workers besides forming policies for their welfare. The implementation of Food Security Bill and education right is only due to the efforts of UPA government, he asserted.
Balbir Sidhu remarked that after coming to power the Congress party will ensure implementation of all pre-poll promises.
Meanwhile Daljit Kaur Sidhu wife of Balbir Sidhu also carried out an extensive election campaign in various parts of town today. She did poll canvassing in various wards of town where she sought vote for her husband for all around development.
In a meeting at Phase 7 she said that Congress has vision of development of all whereas SAD-BJP only focus the development of their own families. The Congress after coming to power will end this culture to promote own development and welfare at the cost of general public. 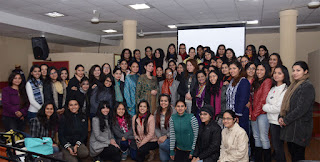 By Tricitynews Reporter
Chandigarh 19th January:- The Postgraduate Department of Psychology of MCM DAV College for Women conducted a workshop on 'Fairy Tale Projective Test of Personality' for the postgraduate students and research scholars. Dr. Carina Coulacoglou, a renowned clinical psychologist from Athens, Greece was the resource person for the workshop. Prof. Adarsh Kohli, Department of Psychiatry, PGI, Chandigarh was the Guest of Honor.
Dr. Carina is the founder of Projective Fairy Test Society and has also developed the test. In her highly informative lecture, Dr. Carina elucidated upon the importance of projective techniques for assessment of personality and gave an in-depth description of the test, it's scoring and interpretation. She also highlighted the utility of the test in tapping the subconscious of children aged 6-12 years. The workshop witnessed enthusiastic response from the students who were in rapt attention during the workshop.
MCM Principal Dr. Nisha Bhargava lauded the initiative of the psychology department to keep the students abreast of the latest in the field, saying that such exposure widens the horizons of the students and helps them to compete at the international level.

Posted by tricitynews online at 04:14 No comments: 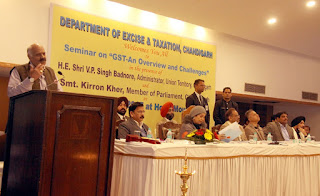 Posted by tricitynews online at 04:09 No comments:

The First Ever Stem Cell Therapy Center Launches in Tricity 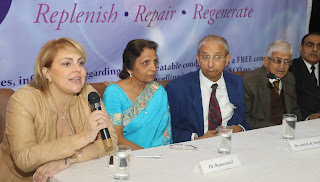 By Tricitynews Reporter
Chandigarh 19th January:- Global Stem Cell Center Miami Florida (U.S.A) brings the evolutionary science of Stem Cell Therapy with its first ever center in India in Chandigarh tri-city area. This therapy can help those who have conditions where traditional therapies may not be available or are not successful. The Stem Cell Center India is located at Peer Muchalla giving access to the four adjoining states–Chandigarh, Mohali, Panchkula and Himachal Pradesh. The Stem Cell Center Group is the largest membership network of regenerative medicine clinics in the world.
Talking about adult Stem Cell Therapy during the media launch of the Stem Cell Center India, Dr. Rama Sood, a practicing member of the board said that Stem Cell Center in India brings with it new-age regenerative therapy which can be used to improve upon many conditions for which traditional therapies have no effect. She also talked about how innovative stem cell therapy aims at enhancing the life of the patients.
Elaborating on the same was Dr. Maritza Novas said that despite all the myths that surround the adult stem cell therapy, the adult autologous stem cells therapy is a safe treatment which requires minimal interventions. She further stated that this therapy is a promising field and is being used to treat or improve on conditions like Osteoarthritis, Type 1 and Type 2 Diabetes, COPD and many more”. A lot of patients have gained the benefits from the treatment which has been successfully implemented in many cases. For this therapy, adult stems are derived from the patient’s own adipose tissue, bone marrow or peripheral blood.
Also speaking on the occasion Dr. Benit Novas, the CEO of the Global Stem Cell Center who talked about the benefits that this center will bring to the people of India. He also said that the Global Stem Cell Centers have grown over the years and have spread across the world at United States, South America, Japan, Korea and Europe and now it is establishing itself in India.
The Global Stem Cell Centers Group, Miami Florida at U.S.A. has highly qualified specialists and technologies that have the capacity to bring the regenerative medicine to the forefront.

Posted by tricitynews online at 04:02 No comments:

By Tricitynews Reporter
Chandigarh 19th January:- In view of the assembly elections on 4th February in the district SAS Nagar, District Magistrate cum District Electoral Officer SAS Nagar Daljeet Singh Mangat using the powers under Punjab Excise Act 1914 section 54 and as per the Representation of Public Act 1951 Section 135-C, has directed all liquor shops within the jurisdiction of district SAS Nagar to remain closed from 4 February 5 PM to 4 February 5PM and also directed to close the liquor shops on 11 March 2017, i.e. on the day of counting of votes.
During these days all wholesale & retail liquor shops and vends will remain closed and within the jurisdiction all hotels, restaurants & Marriage Palaces will not be allowed to serve liquor during the above said dates. Besides this, storage of liquor during the said time will also be prohibited. Liquor will not be served 48 hours prior to & before the polling day. The above stated time is declared as Dry Day.
Posted by tricitynews online at 03:51 No comments: 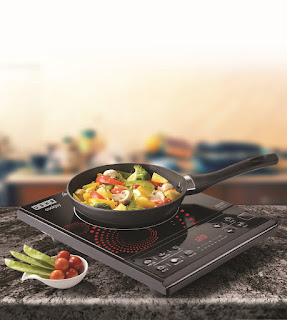 By Tricitynews Reporter
Chandigarh 19th January:- Usha International, one of India’s leading consumer durables company, launched another model Usha Induction cooktop IC 3616 in its Induction Cooktops range.
Usha Induction Cooktop IC 3616 comes with ‘pan sensor technology’ wherein heat turns on only when the cooktop senses the utensil. It also prevents overheating by auto switching to power saving mode maintaining the optimum temperature. It offers a pre-set menu for 5 Indian recipes besides a manual menu control option. Another highlight of the product that sets it apart from competition is it’s resistance to voltage fluctuation up to 1500 Volts. Usha Induction Cooktop IC 3616 comes with a 1340MM long cord for easy placement.
On the launch, Harvinder Singh, President-Appliances and Sewing Machines, USHA International said that with changing lifestyle, increasing number of Indian households require cooking appliances that are convenient to use and safe. Usha offers a wide range of Induction Cooktops with an array of features for cooking requirements of the new-age consumers. This new model further strengthens our range and appeal to a larger set of Indian consumers.
Usha Induction Cooktop IC 3616 is priced at Rs. 2,795/- with 1-year warranty on the product. The USHA Cooktop range is available at all leading stores across the country.

Posted by tricitynews online at 03:45 No comments:

By Tricitynews Reporter
Chandigarh 19th January:- Skillsoft, the global leader in eLearning, as well as SumTotal, a Skillsoft company, announced that they have been recognized for multiple solutions in Elearning!. Media Group's 2016 "Best of Elearning!" awards. SumTotal was a repeat winner from last year in the Learning Management System Enterprise category while Skillsoft earned Award of Excellence honors for three platforms â€“SkillPort, I.T. Skills Library, and Learning Services. Skillsoft is one of only four companies to have been recognized every year since 2005.
Bill Donoghue, chairman and CEO of Skillsoft said that we have focused the entire organization to deliver beautiful technology and engaging content and these awards recognize our commitment and success to delivering on this vision. Bill Donoghue further added that our consistent recognition for the past 11 years by Elearning!. Media Group is an endorsement of our substantial investment and innovation to provide engaging, impactful learning-centric content and beautiful technology to our customers and their employees."
The "Best of Elearning!" awards honor best-in-class solutions across the learning and technology marketplace. Now in its 12th year, Elearning! Media Group accepted nominations across 27 different categories and all nominations, which totaled more than 4,000, were made directly by end users.
Catherine Upton, group publisher said that we are honored to recognize these 99 solutions providers as Best of Elearning! 2016., Elearning! Media Group. The number of nominations and winning organizations is a testament to the innovation and engagement of the learning industry.
Winners will be honored at the Best of Elearning! Awards Celebration hosted at the Enterprise Learning! Conference in August 2017.
Posted by tricitynews online at 03:37 No comments: