By Tricitynews
Chandigarh 21st Jan, 2020:- PAYBACK India, the country’s largest multi-brand loyalty program, this year, plans to strengthen its partner network multi-fold and is in talks with numerous high-frequency transaction segments. As part of the overall strategy, PAYBACK will also be focusing to step up its member base, which is already at over 100 million and create deep engagement with members, leading to business growth and customer loyalty.
Talking about the expansion plans for PAYBACK in 2020, Gautam Kaushik, MD & CEO, PAYBACK India, said that with a focus on increasing the engagement frequency of our members and see new enrolments on the loyalty platform, we are looking at high-frequency transaction segments and are in active discussions with brands in Neighbourhood grocery, Food-delivery, Cab hailing, OTT & streaming media, Quick-Service-Restaurants, online travel tech and Wallets, among others. This will increase the partner network and deepen customer engagement.
He further added that we are going to make a slew of announcements on this front in the coming quarters. PAYBACK generally brings on board the top two to three merchants across categories.
As part of measurable metrics to track effectiveness of a loyalty program, PAYBACK has seen shopping ticket size values for members at 45%-55% higher compared to non-members. Moreover, the buying frequency of members have grown multi-fold and loyalty points redemptions increased in 2019 as consumers beat slowdown by encashing deals to make shopping pocket-friendly.
Gautam Kaushik MD & CEO, commented that an integrated loyalty program that focusses on providing a delightful experience and leverages consumer insights could account for 50-60% of the overall sales of the retail brand, which has been amply demonstrated in many of the PAYBACK brand partnerships.
Having been in the Indian market for a decade, and GMV exceeding ₹1-lakh crore, PAYBACK continues to achieve profitable growth for partners and for the program.
Posted by tricitynews online at 05:40 No comments: 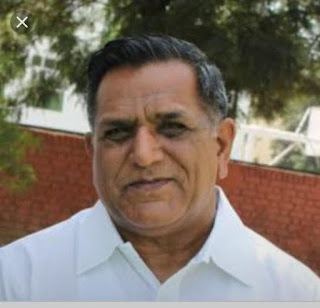 NGO to Hold Blood Donation Camp for the Indian Army 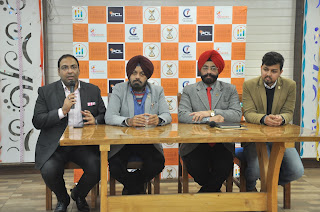 By Tricitynews
Chandigarh 21st Jan, 2020:- A blood donation camp 'Shaurya Blood Connect  With  Indian Army' will be organized by a city-based NGO 'I Am Still Human' (IASH) in association with PCL Gateway and DLF DT Mall, for the welfare of the Indian Army personnel.
The details of the camp were shared by  Vivek Mehra, Founder of  'I Am Still Human' and the 'Shaurya' campaign, who was accompanied by Jagjit Singh Majha, MD, PCL Gateway & a Philanthropist, Col.(Retd.) Jarnail Singh, Deputy Director, Defence Services Welfare, Punjab and Siddharth Prakash, Mall Head, DLF City Centre during a press meet held at Press Club, Sector 27 here.
The 9th Edition  of Shaurya Blood Connect  With  Indian Army will be held from 10:30 am to 3 pm on January 24, (Friday) at DLF City Centre Mall, IT Park, Chandigarh. The blood donation camp will be conducted by a medical team of Command Hospital, Western Command, Chandimandir. A motivational session will also be held by Lt. Gen. (Retd) K.J Singh, PVSM, AVSM**, Former GOC-in-Chief, Western Command and Lily Bawa, Veerangnashri Awardee. Lily Bawa is wife of Late. Lt. Col. I.B.S Bawa, MVC and a proud mother of a gallantry awardee Army Officer. The motivational session will start at 1:30 pm on January 24.
While addressing the Media, Vivek Mehra said that the blood donation camp is a small contribution and a way to pay an ode to the Indian Armed forces, who lay down their lives defending India without thinking even once. This will be a great opportunity for the country to create a 'Blood Bond' with our brothers in uniform and contribute directly for the welfare of our beloved Indian Army. The blood will only be used for the welfare of jawans, officers, veterans and their dependents.
He emphasized that though the government has created several mediums to contribute for the welfare of armed forces, due to a lack of awareness among civilians, they are not able to offer their support to the Indian Armed Forces.
Jagjit Singh Majha, MD, PCL Gateway and a Philanthropist said that we are supporting this blood donation camp under our corporate social responsibility. The camp is a wonderful opportunity for all the people to pay gratitude to our real heroes, who are round the clock doing their duty at the borders.
Col(Retd.) Jarnail Singh, Deputy Director, Defence Services Welfare Punjab said that Punjab's Defence Services Welfare department is happy to be collaborating with this noble initiative. He congratulates NGO 'I am Still Human' to have undertaken campaign 'Shaurya' under which it is organising many activities for welfare of the Indian Army. The blood donation camp is a need of the hour as this precious gift of life is much in need by the Indian Army.  Col Singh also enumerated various welfare measures being taken by the Punjab government for serving as well as retired army personnel of Punjab.
The camp will witness an impressive Army theme décor. An army band will also be in attendance. It is noteworthy that 'I Am Still Human' under the 'Shaurya' campaign before the upcoming blood donation camp has already successfully organised 8 camps at different places including capital New Delhi.  IASH took out a bike rally from Chandigarh to Mumbai in memory of the brave-hearts martyred in the 26/11 Mumbai terror attack. What's more under ‘Shaurya Ye Diwali Veer Pariwaar Ke Saath'  the IASH volunteers took out a bike rally from Chandigarh to Jabalpur to pay tribute to children of Indian Army martyrs.
Posted by tricitynews online at 05:15 No comments: 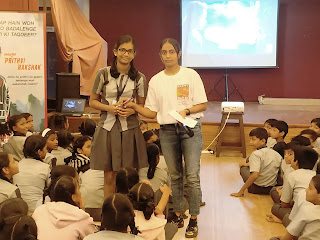 By Tricitynews
Chandigarh 21st Jan, 2020:- Sony SAB’s magical fantasy superhero show Baalveer Returns is reaching out to the Gen Z of India to come forward and join Baalveer in his endeavor to protect the planet, as ‘Baalveer Ke Prithvi Rakshak’. Over 250 schools across four cities - Mumbai, New Delhi, Ahmedabad and Baroda, will be part of the programme.
As part of the program, students, from class 3 to 8, will get an opportunity to join Baalveer in his quest to protect the planet. Just like Baalveer crosses every hurdle and passes difficult tests in his adventures, the kids will also have to undergo a small test to prove their worth to join Baalveer’s Prithvi Rakshak army.  Kids will be tested on their knowledge of environmental problems and their creative ideas to solve the same under three main parameters like knowledge, intelligence and creativity. Based on the responses, two students will be chosen from each school and given the title of Baalveer Ke Prithvi Rakshak, along with a trophy, a certificate and a gift voucher.
Set against the backdrop of the two mystical worlds of Veer Lok and Kaal Lok, Baalveer Returns is India’s most loved fantasy drama show on Indian television, the show featuring Dev Joshi, Pavitra Punia and Sharmilee Raj amongst others recently created a unique distinction of being named as the most searched Indian television show across the world according to Google’s annual trends report ‘Year in Search’ for 2019. This massive achievement also meant that Baalveer was the only Indian television show from a Hindi general entertainment channel to be featured in the top searches for television shows across the world. Through this campaign, Sony SAB aims to take this immensely popular character even closer to existing fans and reach out to more by highlighting Baalveer’s motivations, purpose, morals, ethics and his personality.
Vaishali Sharma, Head, Marketing and Communications, Sony SAB, said that we are extremely happy to see this activity taking shape. This initiative is in line with our philosophy of spreading ‘Khushiyon Wali Feeling’ something that is consistently reflected through our programming as well. We have always believed that Baalveer is not just a show – it is a legend. As happiness enablers, we intend to take this fan favorite character even closer to the fans and instill the spirit of Baalveer within all the youth of the country in a fun way.
Posted by tricitynews online at 05:08 No comments: 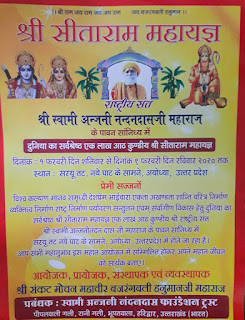