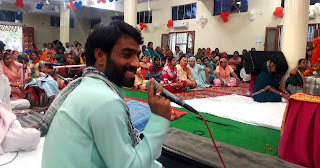 Posted by tricitynews online at 06:51 No comments: 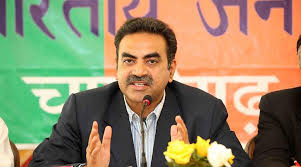 Posted by tricitynews online at 06:21 No comments: 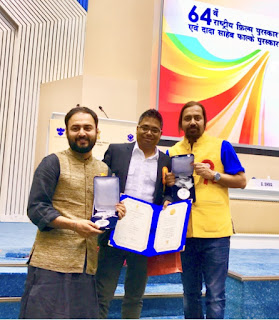 By Tricitynews Reporter
Chandigarh 05th May:- ‘Aaba’ a short film Produced by Mitul Dikshit who is a well known Educationist & Film Enthusiast of city, has received the country’s highest film award the National Film Award for the Best Short Fiction Film at the recently concluded 64th National Film Award at capital New Delhi.
It was a moment of pride for tricity when "Aaba", which has been produced by Mitul Dikshit along with acclaimed filmmaker Raj Kumar Gupta, of No One Killed Jessica, Aamir and Ghanchakkar fame, and directed by Amar Kaushik won the Rajat Kamal Award for the Best Short Fiction Film at prestigious Awards Function this year.
The award bestows a cash award for Rs. 50,000 /- each for Producer and Director. The citation by the I&B ministry praises this cinematic gem which got a standing ovation at Berlinale 2017 as “Cinematic excellence comes to life in this intimate story where the filmmaker shows that silence can also be used as a powerful language of expression.”
Mitul Dikshit, on this occasion said that he produced this film with Raj Kumar Gupta after reading the script. The appreciation this film is getting Internationally and now by winning the biggest award in the country shows the potential the story and the story telling of the young director Amar Kaushik . Winning this National Award is a proud moment for tricity as he comes from here and is a sign of its strengths & its spirit of pursuing excellence in all spheres.
Commenting on the success of the short film, Raj Kumar Gupta, the producer of the film said that winning a National award certainly feels special. Amar has been my associate for a long time, when he narrated him this script he was really moved and he decided to produce it along with his friend Mitul Dikshit, congratulations to each and every team member who made this film happen.
The story is about a girl who lives alone with her grandparents up in the highlands of Arunachal Pradesh. After her grandfather is diagnosed with lung cancer, she watches as he calmly digs his own grave, furnishing it for his comfort in the hereafter with a handful of his worldly possessions. His light-hearted approach to dying is a gentle and laconic acknowledgement of the natural cycle of life and death. But things don’t always go as planned in the land of the living.
The film previously won International prize for Best Short film in the Generation K Plus Category at Berlinale 2017 and has then onwards been in high demand at the film festivals across the globe. Till now, the film has won awards at Indian Film Festival, LA, (IFFLA), Aspen Film Shortsfest which is an Oscar qualifying festival .The film has been shortlisted for New York Indian Film Festival (NYIFF) and also some of the most prestigious International film festivals across the globe.
Posted by tricitynews online at 06:12 No comments: 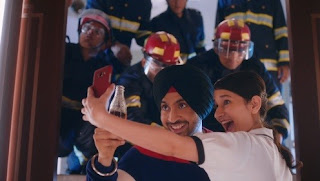 By Tricitynews Reporter
Chandigarh 05th May:- Coca-Cola India today, launched the ‘Elevator’ commercial with Diljit Dosanjh with a vibrant Punjabi flavour. The ad is a compelling follow-up to the “elevator” themed ad with Deepika Padukone under “Taste the Feeling” campaign which highlights the role of Coke in setting off camaraderie between a celeb and their fan. The previously-launched ad in the series has managed to garner more than 25 million views on digital channels till now.
The narrative opens with Diljit being followed by photographers outside a hotel. To escape, Diljit quickly rushes into an elevator and notices a housekeeping attendant with a service trolley inside the elevator. Suddenly there is a glitch and the elevator stops in between the floors. To lighten up the environment, the housekeeper offers a chilled bottle of Coca-Cola to Diljit. Diljit looks pleased with the gesture. He really needed a Coca-Cola right now. This is followed by great camaraderie and cheerful dancing by the two. The popular Punjabi music in the story lifts the feeling and adds to the entertainment quotient. Coke is at the centre of the advertisement which is designed to spread the message of breaking social barriers to foster a strong connect with each other and the carefree spirit within us.
The campaign will be launched on digital platforms with the exciting teasers featuring Diljit Dosanjh, followed by a pilot run of the on-ground consumer engagement activities leveraging augmented reality. The consumers may also get a chance to meet Diljit by participating in many contests and activities that the company is planning to organize.
Explaining the thought behind the campaign, Debabrata Mukherjee, Vice President Marketing, Coca-Cola India, added that Diljit is an inspiration to millions of youth in the country and we really value his association with the brand that stands for positivity and youthfulness. The commercial brings out the message of optimism, happiness and making preferred and most sold beverages in the country–Sprite and Thums Up–being the top two selling sparkling beverages.
Posted by tricitynews online at 06:05 No comments: 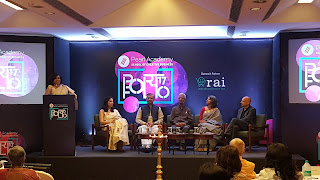 By Tricitynews Reporter
Chandigarh 05th May:- Pearl Academy, India’s leading institution in design, fashion, creative businesses and media showcased path breaking ideas of more than 200 students from its School of Creative Business’ at Pearl Portfolio 2017. Pearl Portfolio is the annual graduating event of Pearl Academy where students from the graduating batch showcase their work to the industry. Eminent guest of honour at the event were Jayant Sinha, Minister of State for Civil Aviation and Padma Bhushan Dr MB Athreya, Indian Author, Educationist & Management Advisor.
The event also witnessed presentations by students on the unique business themes such as ‘innovation in children wear’ and ‘creative marketing strategy for the millennials’. These presentations showcased the creative thinking and innovative approach these students have to business management.  The event also hosted a thought provoking panel discussion with industry experts on the ‘effects of demonetization on the fashion and luxury business’.
Appreciating the bright ideas from the students, Jayant Sinha, Minister of State for Civil Aviation said that he is delighted to see the student work and their creative business ideas. The creative business and luxury market offers huge potential for these students to be successful in their chosen domains. This generation of budding entrepreneurs is thinking about building a global size business and have those benchmarks. It is important to plan scalable business ideas to succeed. He is sure with all the brilliant training and education that you have got at Pearl Academy, all of you will play a significant role in what we call as making of a ‘New India’.


Prof Nandita Abraham, CEO, Pearl Academy said that he is really happy to see the ideas that students have showcased today. For last 23 years, our students have made us proud by shining in their respective creative domains. Our expectations of this graduating batch are no different and he is sure that all of them will create a niche for themselves in the industry.
Posted by tricitynews online at 05:59 No comments:

Harry Gills further said that in the same way, Punjabi films will be produced under the banner of Sky Riders Production House. Under which the first film is "Orchestra" which is the story of three girls based on women's empowerment, in which Drishti Grewal will be in the lead role. Apart from this, there are two other films named “Ghaint Family” and “Gurmukh”.

According to Harry Gills, two highly ambitious projects of the group will also be started soon; the first is South Indian movie "The Raja's". In which he plans to take south Indian super star Rajinikanth as a lead role. But nothing has been finalized yet. The cost of the film will be approximately Rs 400 crore and another film will be "Thanks". He plans to take International star Brad Pitt and Angelina Jolly in the film, but deal yet to be got materialize. The cost of the film approximately will be Rs 1,200 crore.


He said that Hindi film "Delhiwale" will also be on the floor soon, which will start its shooting in 2018. Heart throb Ranbir Kapoor is the first choice for the lead role. But Ranbir Kapoor yet to be contacted. Mayank Mishra directed Hindi film "Mai Pakistan nhi jana chahta" also in the pipeline. 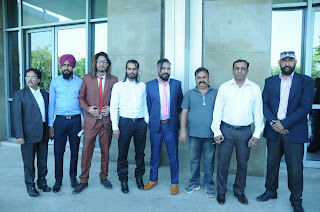 On this occasion Harry Gills clearly mentioned that group wants that more and more chance has to be given the Theater Artist. Group is always ready to start a film with those artists. He also mentioned that if talking about all that Hindi Films& International projects, soon the things will get materializes.
He said that Universal Broadcasting Group started in 2004 with finance in films in South India. After this, group enters into the work of film distribution at international level. The group has tie up with 2500 international and Indian 1200 theaters. In the year 2013, the group also started production.

Posted by tricitynews online at 05:52 No comments: