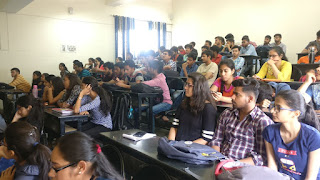 By Tricity News
Chandigarh 17th April:- A One day Workshop on “Embedded System and Applications “   for the 4th semester  B.E(ECE) students was successfully conducted by ECE dept of University Institute of Engineering & Technology (UIET) , here today.
Experts from DKOP labs, Noida and CSIO Chandigarh, motivated the students for the real time applications based on embedded systems. Devender Khari and Shubham Gupta, from DKOP labs told about the recent advances and projects going on in the field of IOT. They have discussed the various technologies like BLYNK and platform for project building.
Dr Sanjeev Kumar , Scientist, CSIO, gave an insight into the various Biomedical aspects of the Embedded system applications. Overall it was motivational and interactive workshop for the betterment of students. The workshop was attended by 100 students who expressed their desire that such programmes should take place at regular basis.

Posted by tricitynews online at 04:52 No comments:

Deptt of Virology PGIMER Gets WHO Accreditation 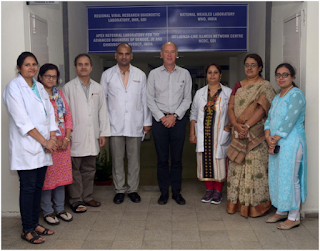 By Tricity News
Chandigarh 17th April:- World Health Organization (WHO), a delegation headed by Dr David Featherstone from New Zealand and Dr Kaveri from KIPM&R, Chennai visited the Department of Virology, PGIMER, Chandigarh on 16th and 17th April 2018 for the second external audit. The Department of Virology became the ‘WHO National Measles Laboratory’ in 2015 and has been serving as the reference centre for serological testing of measles and rubella and underwent an external audit in 2016 as per ISO 15189:2012 standards. To keep up with the ambitious global goal of measles and rubella elimination by 2020, Department of Virology in association with WHO has been instrumental in outbreak surveillance for the past three years and have also recently initiated case-based surveillance in a phased manner.
In the welcome address, Dr RK Ratho, Prof & Head, Department of Virology, highlighted the current status of Measles and Rubella across the country and emphasized the importance of effective vaccination coverage for these two viral vaccine-preventable diseases. Dr Mini P Singh, Additional Professor & Laboratory in-charge further showcased the departmental activities in her introductory presentation. The department has been participating in external quality assurance scheme (EQAS) with KIPM&R, Chennai and Victorian Infectious Diseases Reference Laboratory (VIDRL), Australia for the past three years. Scoring achieved in EQAS is directly proportional to the quality of reports generated by any laboratory. The Department of Virology achieved 100% proficiency in testing the blinded samples for Measles and Rubella serology, received from VIDRL, Australia consecutively for third time.
During the two day visit, Dr Featherstone critically analysed the entire process of serological testing of measles and rubella in the department and gave his expert suggestions for the same. A meticulous evaluation covering all aspects of testing was done by the experts who appreciated the quality standards being maintained in the department. The department has yet again achieved the status of WHO accreditation for carrying out serology for measles and rubella.

Posted by tricitynews online at 04:48 No comments: 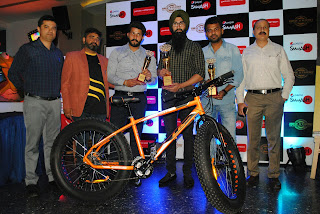 By Tricity News
Chandigarh 17th April:- City Beautiful–Chandigarh - India’s first entertainment and gaming zone has added new attractions to its Chandigarh centre. SMAAASH has introduced Trampoline park at Elante Mall that also offers Twilight bowling, Laser Blast, Super Keeper and VR games, apart from other activities. With this extension, SMAAASH has also announced the winners of   Punjab’s Biggest open bowling tournament 2018 after 45 days of competition between the bowling players. The tournament saw participation from hundreds on bowling enthusiasts.
The residents of   Chandigarh will love the all new pulsating games at SMAAASH. For instance, Laser Blast - a thrilling action packed game for the whole family where one gets to suit up with  futuristic laser vest and enter the special-effect filled arena. To add to the fun, visitors can experience Trampoline Park with family and friends which will provide physical exercise too along with fun.  Also a variety of highly advanced virtual reality games like Finger Coaster, Jurassic Park, Walk the Plank and much more along with the arcade games.
The sponsors for the event Sanjay Mehta, Paras Hometech and Parash Kumar Poplani, Bike studio Chandigarh were also present at the occasion to handover the gifts& prizes to the winners. Gursewak, Tournament winner said that he knew he would be able to win the championship from the first day, it’s a dream come true for me to win this coveted title & thanks to Smaaash for fulfilling this dream. Pin Strike Open Tournament Winners are Gursewak declared Winner,  Ankush declared 1st Runner Up and Vipul was declared 2nd Runner up.

Posted by tricitynews online at 04:43 No comments: 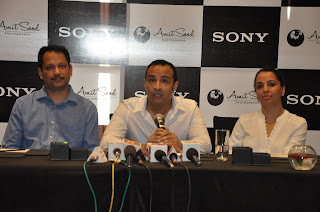 By Tricity News
Chandigarh 17th April:-Amit Sood, a professional ace celebrity Wedding Photography artist of tricity, who pioneered the art of cinematic filming, candid photography and pre-wedding shoots in City Beautiful, way back in 2007, when the Photography Industry was oblivious to these aspects , has once again caught attention of citizens of tricity. The reason- he has been adjudged as an Alpha Influencer in the Northern region by Sony India, one of the most recognized consumer electronics brand in the country. The achievement holds significance for Tricity as he has been chosen as an 'Influencer' for entire Northern region. As Alpha Influencer Amit in a way will be a role model for promoting  best practices in photography among photographers of the region.
A press conference was held to share details & reasons behind Sony announcing the young & dynamic Amit Sood, who runs the renowned Amit Sood Photography in Gurgaon and Panchkula's up market Sec 8, as Sony Alpha Influencer. Amit Sood & Amarinder Chhetri, Branch Manager, Chandigarh, Sony India was present during the conference.
While talking to media, Amit Sood explained his belief in Sony cameras which made him accept this offer with an open heart. He said that photography is a great art which can be well executed with the help of good equipment. He has personally used the products of Sony and hence believes in them. The longevity as well as the picture quality of Sony cameras is appreciable. He added that he also have high regards for the company due to the amazing work done by Sony in organizing workshops for the budding photographers, which has made it a proud privilege for him to be associated with the brand as its Alpha Influencer.
Amarinder Chhetri, Branch Manager, Chandigarh, Sony India said that we are very happy to have Amit onboard with us as  Influencer for Sony Alpha cameras. We believe that Amit can be instrumental in positively influencing the local photography community in the region and we are happy to support him in this initiative. We wish him good luck and look forward to a fruitful and long-term relationship.
It is noteworthy that Amit has brought about a paradigm shift in the way photography was done in the region. A characteristic which distinguishes Amit is his ideation behind destination weddings outside tricity. His innovations used in making both pre-wedding shoots and wedding ceremonies more of a story than a moment is his forte. Because of this, a lot of couples have been coming to him for planning their destination weddings. He has shot wedding ceremonies of celebrities which include the wedding of popular actor- Sargun Mehta as well as renowned singer, Navraj Hans. An expert in the art of candid photography and cinematography, Amit views photography as a passion instead of profession. The artist’s hall of achievement includes being awarded as the best wedding photographer in Delhi and the best candid wedding photographer in India. He has also done pre-wedding shoots in Leh Ladakh, Dubai, and Rajasthan and covered wedding ceremonies across the globe. What's more, he is the only photographer in India to shoot an engagement event on a Boeing, the popular commercial airplane.
All this was instrumental in his becoming Aplha Influencer. With this remarkable work under his belt, & armed with the sobriquet of Alpha Influencer, Amit will act as a mentor to people who want to establish themselves in the creative field of Photography.
It is pertinent to mention here that apart from his passion for photography, Amit is also a socially active person. He is connected with Rotary and organizes blood donation camps with his team every year. In addition to this, he has actively participated in making people aware of cancer and generation of funds for the same. To make photography recognized as an art, Amit wishes to teach photography to youngsters who want to pursue this field and hence he conducts various workshops in schools where generally underprivileged children study.
Amit said that in his opinion, to be able to succeed in life, one needs to compete with one’s own self because that is the true success. He also have a desire of opening a photography institute in North India, if Government supports him.

Posted by tricitynews online at 04:22 No comments: