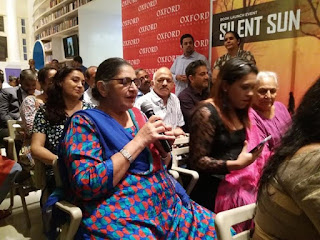 By Tricitynews
New Delhi 24th August:- Delhi’s iconic Oxford Bookstore witnessed the launch of ‘Silent Sun’ by Ayushman Jamwal, the journalist and author’s second poetry collection after ‘Chameleon Lights’ in 2016.
The book explores the human condition in the modern era through different eyes of humanity, the constant and elusive search for meaning in the absence of the struggle for survival. Drawing from his experiences in the newsroom – Ayushman’s vivid verses explore that human drive from the perspective of women (Am I Not God’s Child?), soldiers (May The Valley Hear Me Roar), refugees (We Remember, Our Nation Forgets), broken souls (The Cursed Rockstar) and even gods (Rama’s Lament). The poems highlight that through turmoil and happiness, human beings want to achieve the realisation of their place in the world and the contours of their soul - donning the roles of creators, preservers and destroyers from time to time.
Ayushman Jamwal and journalist Radhika Dutta discussed the author’s journey to craft the collection. Other poets too took the stage to recite their favourite poems from ‘Silent Sun’, with many applauding The Cursed Rockstar, Ayushman’s tribute to Linkin Park singer Chester Bennington who tragically took his own life in 2017.
The interactive session was followed by musical renditions of the poems, with performances of ‘I Think Of You’ and ‘The Lost Artist’ to huge applause from the audience.
Poetry is in Ayushman’s DNA. He is the grandson of celebrated Dogri poet and Sahitya Akademi recipient – the late Group Captain Randhir Singh, also known as Kunwar Viyogi. He curates the ‘Innovation in Art’ initiative of the Kunwar Viyogi Memorial Trust founded in the memory of his grandfather, which gives a platform to budding artists and works towards preserving the Dogri language.
Ayushman Jamwal said that Silent Sun celebrates the passion that elevates all of us to be a little more than nothing, and the array of emotions that fuel that passion. He added further that the Oxford Bookstore has given him an appropriate platform to launch the book and connected him to so many kindred spirits and like-minded souls to share his work and celebrate the power of expression. He hope people connect to Silent Sun and find their fire between the lines. 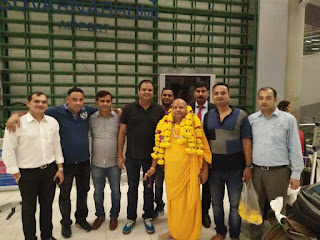 By Tricitynews
Bangkok/Chandigarh 24th August:- Last few days back in the other holy land of Prabhu Shri Ram Ayuthaya(Thailand) where Mahant janmejay Sharan and Dushyant singh announced the construction and did the Bhumi pujan for Shri Ram Mandir the another signature for the people of Sanatan Dharam and crore of devotees.
It's  a very good news for every Indian but beside that the dark side of good work is they both are threatened by unknown people by abusive letters and death threats . The threat letter was found in Ayodhya Ashram the FIR is filed against this in Kotwali,Ayodhya, Uttar Pradesh.
Mahant ji said he is unable to understand why people are doing this kind of rubbish things for every holy work and Dushyant Singh said that he is not afraid but it is very unexpected for him because it's a work of Prabhu Shri Ram and they don't even belong to any party or political leader this is the dream of Mahant ji and crore of Indians if anybody is having problem with it they can talk to us directly if not they are ready to face everything.

Posted by tricitynews online at 04:58 No comments: 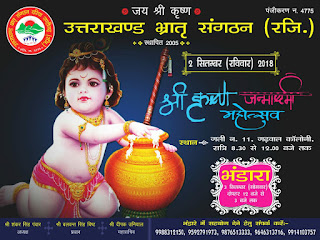 Posted by tricitynews online at 04:45 No comments:

By Tricitynews
Chandigarh 24th August:- The UT Employees under the banner of Federation of U.T. Employees and Workers Chandigarh will massively participate in the 5th September 2018, Majdoor Kisan Joint Rally in Delhi. The decision of participation in rally is taken today in the working committee of the federation of U.T. Employees and Workers Chandigarh about 02dozen office bearers and working committee members of about 16th affiliated units of the federation participated in the meeting.
The meeting discuss the economic and industrial policies of union government in detail and further discussed that the prizes of essential commodities are reaching sky high and number of unemployment is increasing day by day. The minimum wage Rs.18,000/- p.m. has not been increased despite continuous struggle of Central Trade Units and demanded that labour laws, which are in favour of employee and workers should not be amended unilaterally and also discussed that outsource/ contract employment should not be continue against the perennial nature of work beside demanding, equal pay for equal work and strongly demanded to fill up the vacant post on regular basis till the regularization of contract / outsource workers and further demanded to restore old defined pension scheme by scrapping NPS. The meeting, while discussing the demands of employees and workers, unanimously decided to participate in the 5th September 2018, Majdoor Kisan Joint Rally in Delhi, in a massive way.
The working committee of the federation through a resolution condole the people of Kerala, who have lost their life in flood. While condoling the these peoples federation decided to collect the mass collection, for depositing the same in Kerala, Chief Minister Distress Relief Fund, for the help effected persons/families. The working committee of the federation appeal all the employees, officers and workers of UT Chandigarh to come forward for to rehab the life of families of Kerala (India).

By Tricitynews
Chandigarh 24th August:- After first kidney transplant in August 2013, followed by region’s 1st successful ABO-incompatible (Different Blood Group) kidney transplant,  doctors at Max Hospital, Mohali broke blood barrier in organ transplant thus giving hope to patients looking for donors without blood group matching.
The Kidney Transplant Unit at Max since its inception in 2013 has done almost all type of difficult surgeries. It’s in fact a first centre to perform ABO incompatible transplant in northern India with majority of transplants involving live donors. The centre has performed many cases of swap transplants and pediatric transplants.
Recently a person underwent kidney transplant for 3rd time at Max, which is very rare even at centers like PGIMER Chandigarh after his first two transplants failed.
The 47 years old male patient had undergone two transplants in the leading hospitals in Chennai and Chandigarh in 2003 and 2007 respectively. First time, he got kidney from his wife but had graft loss in 2007. In his second transplant, his father donated the kidney for him.
Unfortunately he lost his graft kidney again in 2018 and put on dialysis. After getting refused for kidney transplant in other centers due to high surgical and immunological risk, he reached at Max center for 3rd transplant.
To announce completion of successful 500 kidney transplants at Max’s kidney transplant unit, Dr. Munish Chauhan, senior consultant Nephrology and Kidney Transplant, said that the patient’s kidney was placed inside the abdomen (intraperitonealy) which is technically demanding whereas normally we place it outside peritoneum . This type of surgery has been done only a few times all across the world.
Dr Jagdish Sethi, senior consultant and chief transplant surgeon said that our centre is equipped with state of the art operation theatre and  advanced ICU set up which is at par with best centres in the world. We are amongst the top 10 hospitals in the country doing more than 100 transplants every year since inception.
Dr Vinay Sakhuja, Director Nephrology and Transplant Medicine said that we have also done transplants in very poor patient with support of Max India Foundation; even few patients from different states have been benefited by chief minister relief fund providing huge financial relief to these patients.
Compared with maintenance dialysis, renal transplant is associated with better quality of life, improved life expectancy, and lower costs. It is considered the treatment of choice for the majority of patients with end-stage renal disease (ESRD), including patients older than 60 years of age.

Posted by tricitynews online at 04:32 No comments: 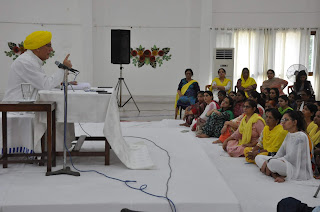 By Tricitynews
Chandigarh 24th August:- Dev Samaj College , Sec 36 here has organised a unique festival 'Dev Samaj Satya Dharma Bodh Utsav'(Moral Education Festival), to inculcate & make Dev Samaj Group of Institution's students, staff members & members of society, aware about the importance of moral values in everyday life. The one of a kind initiative will be on till August 25, 2018.
The Chief Guest & Speaker at today's function was Nirmal Singh Dhillon, Secretary,  Dev Samaj & Chairman, Dev Samaj Group of Institutions.
Nirmal Singh Dhillon engaged the audience really well through narration of real life experiences related to importance of moral values & sharing of his life's research on great men of history. He said that one should know about History & Literature, as only then one can appreciate the evolution of humans and the growth that human race has made.
He said further that a society is known by its litterateurs, authors, poets, scientists, artists etc as they have the power to transform society for the better. If a writer can produce some very effective literature then this has the ability to make society  a perfect place. These people have the capability to create such a utopia where there will be no need of a government.
Nirmal Singh Dhillon further added that truth and goodness are the main aspects which all humans need to incorporate in their lives,  if human life is to be made meaningful.
He said that one needs to have a 'development oriented' approach in life, which was possible only through 'scientific temper'. He gave examples of how great scientists like Archimedes and Galileo were persecuted by ill informed and radical forces of those times, but despite this, they continued their good work. He said that there will be many roadblocks if one tries to lead a life of morals, truth & goodness like was the case with great people from History, but one should never give up on his or her values. In fact one needs to develop a passion for the subject of interest, this may be 'spiritualism' or for that matter any other subject.
During the talks at the festival, youngsters & elders alike will  be enlightened on how to lead a harmonious existence in regard to all four kingdoms -namely Animal Kingdom, Plants Kingdom, inanimate world and Human world.
Dr. (Mrs.) Madhu Prashar, Principal, Dev Samaj College for Women, Ferozepur also conducted a session today on the subject-'The need of truthfulness in a human's life' . Dr(Mrs.) Agnese Dhillon , Principal of Dev Samaj College, Sec 36, Chandigarh & Dr Jaspal Kaur, Principal, Dev Samaj College, Sec 45, Chandigarh were  also present among other dignitaries.

Posted by tricitynews online at 04:22 No comments: