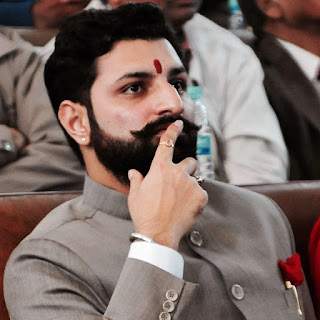 By Tricitynews Reporter
Chandigarh 30th March:- Youth Leader from Chandigarh Sahdev Salaria has been appointed Member of National Executive Committee of Bharatiya Janta Yuva Morcha by its National President and Member of Parliament (MP) Poonam Mahajan.
Sahdev Salaria has also been made the incharge of Bhartiya Janta Yuva Morcha, Himachal Pradesh. He is closely associated with Member of Parliament, Chandigarh Kirron Kher and has been working with her for the last 3 years. He has devoted himself full time to the party at a very young age 5 years ago. He started his political career as Mandal President in Pathankot and later worked with senior leader and presently Sangathan Mantri, North East Ajay Jamwal.
Sahdev Salaria has thanked Poonam Mahajan and has assured that he will work with full dedication. He has also thanked Kirron Kher and Ajay Jamwal for his appointment.
Posted by tricitynews online at 05:44 No comments:

By Tricitynews Reporter
Chandigarh 30th March:- The city beautiful is turning into technology hub eventually, has motivated a lot of techies to have their establishment here. This led to the conception of a new idea – Gadget Gateway, country’s first gadget mall in Berkeley Square at Industrial  Area, Phase 1.
Initiated the construction process in 2008, they have worked relentlessly to create an organized and authentic market for all technological advancements in Mobile, IT & Electronics. First of its kind mall, Gadget Gateway has already created buzz in the market and has attracted major brands to have their exclusive showrooms here. National & International brands like Samsung Smart Café, Dell exclusive store, Acer exclusive store and IT House are coming up with new technologies introduced worldwide. In the purview of latest happening, some of the local brands have already initiated their operations like devicekart.com, Himalaya Photo Store, Costprice, Pankaj communications, Cell Point, MK Electronics and Sai Mobile Communications. 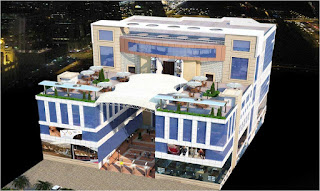 Addressing a press conference at Gadget Gateway, Rajnish Chaudhary , CEO-Gadget Gateway claimed that Gadget Gateway is unique and inventive idea, focusing to give a different yet memorable experience and is completely customer oriented. He said further that Gadget Gateway is in fact a single-roof platform for technology geeks looking for an organized mobile market. Not limited to Mobiles, Computers, Laptops & Accessories, the mall is planning to build city’s largest repair and servicing center catering to all the damage related issues.
Rajnish Chaudhary mentioned that in addition to the technology products, the mall management is in talks with a number of IT firms to have their offices at 2nd floor here in the Mall.  Giving a holistic solution, the place is well-planned & resourceful market platform to give mobile & IT solutions from multiple local and international players.


Last but not the least, ground floor in the mall has space for business meetings with provision of high-speed wi-fi system. The silent and calm surrounding creates conducive ambiance for business people. 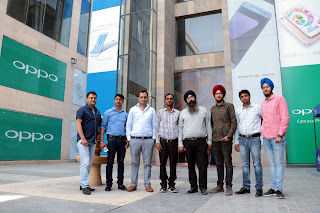 Gadget Gateway thrives to create an outlook where every store, every kiosk, every nook, and every cranny will be full of computers, computer parts, cameras, media players, games and consoles, phones, monitors, and every other kind of electronics you can think of. It is going to be a gadget lover’s paradise.

Posted by tricitynews online at 05:39 No comments:

By Tricitynews Reporter
Chandigarh 30th March:- SumTotal, the leading provider of talent management solutions, unveiled a range of new features and additions to the SumTotal Talent Expansion® Suite. The Talent Expansion Suite is the first in the industry to bring talent, learning, recruitment, and workforce management into one platform. This release includes expanded access to learning content, enhancements to the visually engaging user interface, improved browsing and search capabilities, and deployment flexibility to meet the complex technical requirements of modern organizations, both in the cloud and on premise.
The SumTotal Talent Expansion Suite simplifies and streamlines talent management for organizations and engages employees with innovative solutions to know, mobilize, develop, promote, reward, and incentivize global organizations of all sizes.
Bill Donoghue, chairman and CEO, Skillsoft said that since the acquisition of SumTotal we have invested significantly in bringing a platform that delivers rich functionality on a beautiful consumer-led experience to market. Last year, we brought learning and talent together in our Talent Expansion Suite and with this release; we have a unique proposition in the market-delivering talent, learning, recruitment and workforce management on a single, unified data SaaS platform. He added that by bringing all the HCM components into one suite, we are addressing our clients and the market challenges of attracting, retaining, developing, and engaging this multi-generational workforce – delivering a state of the market digital technology experience with cutting edge functionality.
Posted by tricitynews online at 05:33 No comments:

By Tricitynews Reporter
Chandigarh 30th March:- Infosys (NYSE:INFY), a global leader in consulting, technology, outsourcing and next-generation services, today announced that it has achieved Cloud Elite status in the Oracle PartnerNetwork (OPN). With this designation, Infosys is well positioned to help customers achieve cloud transformation, and provide sophisticated capabilities and next-generation services on Oracle Cloud. With strategic specialization and training programs, innovative joint solutions, and a clearly defined solutions roadmap, Infosys’ Cloud Elite status will help clients derive better business value.
With multiple solutions on the Oracle Cloud Marketplace, dedicated centers of excellence (COE), industry specific solutions, co-development initiatives, and RapidStart Methodology that delivered as much as 30 percent reduction in effort and cost, Infosys has a very strong value proposition to give clients an unparalleled competitive advantage. This new dimension of the partnership gives an added impetus to the commitment and engagement for next-generation services on Oracle Cloud and provides greater value to our clients through higher specialization and innovative co-developed solutions.
During Oracle OpenWorld 2016, Infosys was recognized with seven Oracle Cloud Excellence Awards across SaaS, PaaS and IaaS pillars. Infosys is also a Diamond level member of Oracle’s PartnerNetwork.
Camillo Speroni, Vice President, Worldwide Strategic Alliances, Oracle, said that Infosys’ achievement of the Oracle PartnerNetwork Cloud Elite designation is a demonstration of their commitment to delivering industry leading use case solutions that reduce our joint customers’ implementation timelines in their journey to the cloud. Infosys’ industry-led cloud offerings deliver pre-built integrations, enhanced customer experience, personalization and ROI-based outcomes that simplify these companies’ cloud transformations.
Ravi Kumar, President and Deputy Chief Operating Officer, Infosys, said that his recognition is a testimony of Infosys’ deep investments in cloud innovation and capabilities as well as our commitment to build cloud-focused Centers of Excellence around the world to deliver compelling business value. We have been continuously re-thinking existing business systems, co-creating innovative solutions by leveraging the power of Design Thinking and working on new ways of understanding client requirements and engaging with them.

Ali Asgar Disguises as an Adivasi Woman in ‘Trideviyaan’ 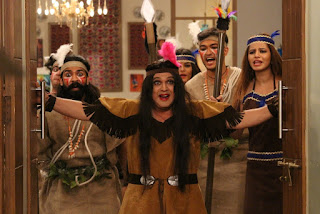 By Tricitynews Reporter
Chandigarh 30th March:- It was a ‘Mushkil March’ for Trideviyaan indeed! The trio has been busy facing all the challenges and solving cases where they found the truth behind a mysterious ghost, dealt with a fake incarnation of dadaji and finally defeated an evil magician ‘Kilmish’. However, their quandaries do not stop here, now the Trideviyaan, Dhanu (Aishwarya Sakhuja), Tanu (Samaira Rao) and Manu (Shalini Sahuta) will have to fight against an Adivasi queen called Katappi and her entire tribe.
Renowned comedian and actor Ali Asgar who is known for his comedy will now entertain the viewers on SAB as an Adivasi woman in the show ‘Trideviyaan’. Ali will be seen in yet another interesting character as Katappi. In reality, he just poses to be an Adivasi, because he has a hidden agenda which no one is aware of, for which disguises as the alpha queen of an adivasi tribe. He stays with the tribe and leads them towards his personal mission for seizing their hidden treasure. He gets involved with Trideviyaan as they happen to have the key to the treasure that he is after. It gets more interesting when these adivasis come to Mumbai to get hold of Trideviyaan and the key under Katappi’s command. They put themselves in various hilarious situations when they fail to understand how to use urban products in Mumbai.
Commenting on his role, Ali Asgar who plays the character of Adivasi woman said that this character is very different from his previous characters. This is a cameo role as a Police constable who turns into an Adivasi Women. This time it’s a task for the Trideviyaan as they don’t know why he is behind them and what his real Identity is. It will be exciting for the viewers as they watch him donning the look of an Adivasi woman. He is very happy to be a part of Trideviyaan as this show has a unique story-line. He has worked with Sony SAB in the past and he is glad to work with them again.
Posted by tricitynews online at 05:24 No comments:

Pune College Gets India’s First of its Kind ‘Ink Lab’

By Tricitynews Reporter
Chandigarh 30th March:- Siegwerk India in association with Parakh Agro announced the setting up of India’s comprehensive, first of its kind INK LAB in Printing Engineering Department at PVG’s College of Engineering and Technology, Pune (PVG’s COET). The initiative aims to educate and engage with the students of the Printing Engineering Department as well as the future workforce of the industry.
The lab is the initiative of the college’s 32-year old printing engineering department and the first lab that Siegwerk, a 180-year-old leading manufacturer of printing inks, has helped set up in an Indian College. Setting up of the Ink Lab will enable the Printing Engineering Department in being equipped with Kyowa Surface Tensiometer DY300 which will help in understanding the interaction between substrate and ink. The role of Siegwerk India to this project will be the contribution of the equipment, industry best practices and knowledge transfer by its experts through sessions for the students. The Ink lab will help facilitate and benefit students to get a hands-on experience of dealing with Ink Technology.
This initiative will set to be a two-pronged enabler that will look at training students on live projects, understand substrate-ink interaction for problem solving and reach out to the current existing workforce from the industry to enhance and improve their existing skills by inviting them to use the Ink Lab. 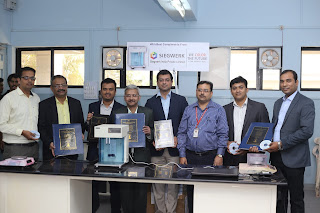 Commenting on the project,  Ashish Pradhan, CEO, Siegwerk India said that this project is a very significant development for the college and the industry as a whole, as we are attempting to create knowledge sharing through best resources from the industry. The collaboration between an ink manufacturer, a printer and the academia to bring in cutting edge technology to the Indian printing industry is unique. Globally, the flexographic printing ink market is projected to hit $11 Billion by 2024 (Global Market Insights Inc) – Our partnership today, therefore, is extremely significant as it is paving the way for the Indian printing ink industry to be a part of the global growth story.


Dr. Akshay V. Joshi, Professor, Printing Engineering Department, P. V. G’s College of Engineering and Technology, Pune, India said that we are extremely glad to be able to partner with Siegwerk and upgrade our existing infrastructure as well as bring in relevant additions to our existing syllabus. With this development we are confident of equipping our students with the latest ongoing in the industry and hence prepare them as ready-made resources for on ground requirements.
Posted by tricitynews online at 05:19 1 comment: 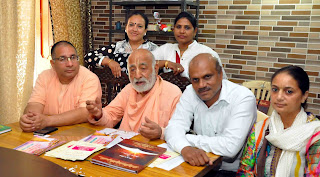 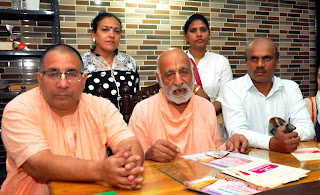