A Fiery Disaster Stirs Up in Sony Sab’s Ichhapyaari Naagin 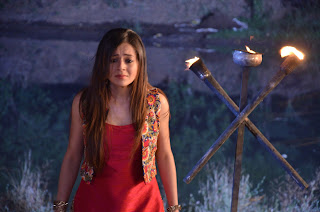 By Tricitynews Reporter
Chandigarh 28th December:- Ichhapyaari Naagin, Sony Sab’s unique supernatural show that displays the lives and stories of two realms, the Earth and Naagistaan, is going to witness thrilling turn of events in the upcoming track.
Ichha played by Priyal Gor is taken to task by Agvansh who is determined to light up a fiery disaster in the Pratap family home. Although Ichha’s plan of disguising herself as Dadi to stop any fire related activity was successful in the beginning, she is seen struggling to keep up with the evil plans by Vishaili who is privy to her disguise.
Vishaili’s multiple attempts of producing fire in the Pahlwan home are seen going wrong. However, eventually, she manages to convince Dadi to have a ‘Havan’ in favor of ‘Agni Dev’ to secure them from any evil influence. Ichha tries to resist the idea, but all in vain.
Ichha is left with no other choice but to use her powers and stop Dadi from getting any fire near the Pahlwan home. She puts Dadi to sleep and once again disguises herself as Dadi and proceeds to save the day. Much to her surprise there is already someone else disguised as Dadi near the ‘Havan Kund’. Till the time Ichha realizes who that person is, there is huge blast at the ‘Havan Kund’ and the other Dadi is severely injured.
Who can be the other Dadi? Will she survive the blast? Will Agvansh succeed in his evil plans?
Priyal Gor who plays the lead role of Ichha commented that Ichha feels helpless in multiple situations where she is not able to stop Vishaili from executing her evil plans, however, luck seems to favor the Pratap Family and each time they get saved, until Dadi plans the ‘Havan Kund’.

Posted by tricitynews online at 04:19 No comments: 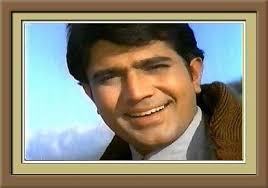 By Tricitynews Reporter
Chandigarh 28th December:- In the century of Hindi cinema, one thing that would always remain unforgettable would be the hysteria for Rajesh Khanna. Born in Amritsar in 1942, Rajesh Khanna is touted as India’s first superstar and was a supernova. Film legends says the mere sight of him caused women to faint, slash their wrists and send him letters written in blood. Zee Classic, with its brand promise of Who Zamana Kare Deewana, celebrates the thespian’s 74th birth anniversary with a week-long ‘Superstar Rajesh Khanna’ festival. On his birthday, the channel airs ‘Mere Jeevan Saathi’ on Thursday, 29th December at 12:45 pm.
In the iconic romantic film Mere Jeevan Sathi, gifted painter and playboy Prakash (Rajesh Khanna) falls in love with an NRI doctor Jyoti (Tanuja). When he is finally set to marry the girl he loves, Prakash loses his eyesight in an unfortunate accident and his life turns upside down.
Following Kaka’s birthday, the birthday special concludes on Friday, 30th December at 12:45 pm with Amar Deep. Also starring Shabana Azmi and VinodMehra, this film is a love triangle between a wealthy businessman, his servant’s daughter and her lover.
Posted by tricitynews online at 04:15 No comments: 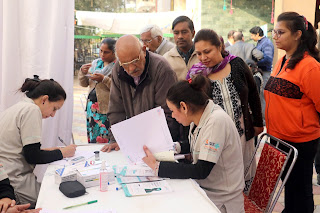 By Tricitynews Reporter
Panchkula 28th December:- Under its corporate social responsibility  , Max Super Speciality Hospital , Mohali has organized a free mega Cardiac and Orthopedic health camp at Aggarwal Bhawan, Sector 16 Panchkula today. Around 150 people of town reached at camp and availed the multi-speciality health facilities from a team of doctors from hospital. The camp was organized in association with Param Seva Trust, Panchkula.
The doctors’ team that included Dr Ruchir Rastogi from Cardiology, Dr. Vinod Singh Sachdev from Internal Medicine, Dr.Gaurav from Orthopaedics, Dr. Jaspreet Kaur from Gyanecology and Saruchi the Optimetrist addressed the healthcare needs of people during camp. Free tests of blood sugar, blood pressure, bone mineral density and ECG, on recommendation were also offered during camp.
Speaking during occasion, Sandeep Dogra, Senior Vice President and Zonal Head of Max Hospitals Punjab said that today camp was another endeavor from Max under its CSR initiatives to serve society in line with the Max Group philosophy of ‘Seva-bhav.  He added that we strive to provide best medical facility to people at their door steps. To meet this aim, we are organising free camps in many places of Punjab, Haryana and Himachal in quite past time. In camp our main focus is to provide quality medical consultation to those people, who due to long distance or lack of nearby health care facility fail to avail such services.

Posted by tricitynews online at 04:05 No comments: 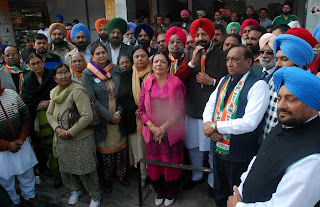 By Tricitynews Reporter
Chandigarh 28th December:- Taking lead from others, Balbir Singh Sidhu the Congress party candidate from Mohali  constituency has formally launched his election campaign with the inauguration of party office at phase 7 here today. The office was inaugurated by Lt. Gen ( Retd) , Jasbir Singh Dhaliwal in the presence of hundred of party leaders and workers .
Interestingly where other political parties are yet to announce their candidates from Mohali, Sidhu has already started his aggressive poll campaign in area.
Meanwhile launching a scratching attack on SAD-BJP government in state, Balbir Singh Sidhu blamed government wrong policies for putting development of state in back gear. Everybody in state including youth, farmers , employees and ex-servicemen are fed up from the misrule of government and feel cheated at the hands of government whose tall claimed failed to take any concrete shape.
Balbir Singh Sidhu said that this time Punjabis want to see Capt Amarinder Singh as their Chief Minister as only Congress party has the vision to bring back the state on the path of development. The Congress after coming to power in state will ensure job to a member of each home in state while eradicating drug menace from state.
He said further that Capt Amarinder Singh has vision for Punjab’s growth and welfare whereas Badals have only an agenda to benefit own families. Now Punjabis have to decide that whether they want thier own welfare or the welfare of Badals’ family members.
Lashing out on AAP , he said that AAP has become like a local bus which is full of opportunists people who for their own vested interest are playing with the sentiments of Punjab people.
Delhi CM, Arvind Kejriwal has no fix stand on Punjab benefit matters as he keeps on changing his own statements. APP leadership has no vision and plan for Punjab. They are only wasting Delhi government money to shine their leadership in Punjab, maintained Sidhu.
Posted by tricitynews online at 04:00 No comments: 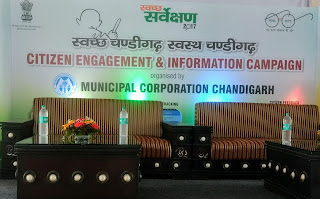 By Tricitynews Reporter
Chandigarh 28th December:- The Members of Chandigarh Traders Association held a meeting today under the President ship of Kamaljit Singh Panchhi wherein the Trader members were apprised of launching of SWACHHTA APP for keeping our city all times clean just on click “SWACHHATA- MoUD”.  Whenever and wherever anybody sees dumping of garbage requiring immediate sweeping, smell emanating from Toilets etc., you can click on the App which will be notified automatically for prompt action by Municipal Corporation Chandigarh.  K S Panchhi appeals to Traders of City, NGOs, and sector-wise Residential Association etc. to be active to use the App for proper cleanliness of our City Beautiful.
The above action followed after the meeting today headed by Primal Rai, Advisor Chandigarh Administration attended by Mayor. Municipal Commissioner, Chief Engineer MCC and many other dignitaries of Chandigarh Administration alongwith Kamaljit Singh Panchhi and other Traders in Community Centre Sector 22,Chandigarh.
The Administration has also apprised THRU SMS to general public “SWACHH SURVEKSHAN 2017” and K S Panchhi appeals toTraders and Residents Welfare Associations to send online feedback about Cities Cleanliness for proper rating so that we are adjudged as City No. 1 in the Country.
The meeting was attended by Mandeep Singh, LC Arora, PK Grover, Narinder Jain, Jodh Singh, Rakesh Jain, Sunil Kapoor. Anil Sharma etc.

Posted by tricitynews online at 03:54 No comments: