By Tricitynews Reporter
Ludhiana 11th January:- Connect Broadband; the leading Wire-line and Broadband service provider today hosted an entertainment packed evening for industry leaders at the hotel Radisson Blu, Ludhiana. Connect Broadband is a forerunner in organizing such evenings for customers and the idea behind the recent initiative is to connect with customers and engage with them in an informal way. Business owners and top executives of diverse industries including banking, education, publishing, IT and technology, travel & tourism and healthcare attended the gala event.
To adorn the gala evening, Connect Broadband invited famous bollywood sufi singers ‘Nooran Sisters’ Jyoti and Sultana who come from a family of musicians and are renowned for Sufi style of singing. People were engrossed with the soulful melodies coupled with heart stirring compositions that Noora Sisters had prepared for the event. Their voice enthused, captivated and enthralled audiences across age groups, genres and geographies. The event was live streamed on the Facebook page of Connect Broadband for the music lovers.
Arvind Bali, CEO & Director, Connect Broadband & Videocon Telecom said that Connect Broadband has always been the preferred brand for discerning, retail and enterprise customers, by offering unique propositions. He added that organizing such entertainment evenings for our customers gives us a chance to take customer engagements to the next level, where we can interact with them on a personal level and they can get a better understanding of their preferred service provider.

Posted by tricitynews online at 04:41 No comments:

Babble to Transmute Into an Ichhadhari Naag

By Tricitynews Reporter
Chandigarh 11th January:- Sony SAB’s Ichhapyaari Naagin witnessed a lot of drama after the entry of Naagin Vishaili. She transforms as Amrita (Rehyna Malhotra) in a human form on a mission to destroy Prataap family. Successfully tricking Babble in drinking the poisonous milk after which Babble starts behaving negatively, she now aims to convert Babble into one of her own, an Ichhadhari Naag.
All the attempts by Ichha (Priyal Gor) to save Babble fritter away after his engagement with Amrita. Ichha notices the change in Babble’s behavior and realize that Amrita is planning something vicious. Prabal who is suspicious about Amrita ask Babble to break the engagement so that Amrita can marry Sabbal. Infuriated by Prabal’s request and unaware of his poisonous powers, Babble bites sabal in a fight in the Akhada. Prataps rushed Sabal to doctor as he fell unconscious due to the poison in his body. Later, police arrests Babble for attacking his own brother. Taking the advantage of the situation Amrita kidnaps Babble and take him for the process of Naag Atmikaran. However, Ichha gets to know about Babble’s kidnapping and she decides to inform the Prataap family.
Sharing his insights on the latest track Babble (Mishkat Verma) said that after drinking the poisonous milk Babble starts converting into a naag and he bites sabal out of anger. This creates chaos in the family. Babble himself is clueless about his behavior and feels guilty. However Amrita has a different plan for him. The climax of the track is very inquisitive.
Posted by tricitynews online at 04:37 No comments:

By Tricitynews Reporter
Chandigarh 11th January:- Zee Entertainment Enterprises Ltd (ZEEL), will soon present one of its most awaited property ‘Zee Cine Awards 2017’. With the might of Zee Entertainment reaching out to over 1 billion viewers across 171 countries, it will be telecasted nationally and globally.
This year it gets bigger and better and will see a huge quotient of glitz, glamour and razzmatazz.  ‘Zee Cine Awards 2017’ will be held in Mumbai on Saturday, 11th March 2017 and the Awards will premiere on Zee Cinema – India’s largest theatre of Hindi movies.
‘Zee Cine Awards 2017’ is India’s only 'Integrated National Award' as it truly embodies ZEE’s brand ethos of ‘Vasudhaiva Kutumbakam–The World Is My Family’. It goes one-step ahead by acknowledging and awarding some noteworthy performances across other regional languages on a national platform.
Audiences will enjoy an evening with the who’s who of the industry gracing the event. Watch out for the some exciting news on the hosts and the hottest stars who will light up the stage with some high-voltage performances.
Posted by tricitynews online at 04:29 No comments: 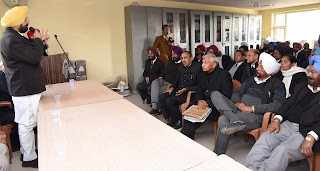 By Tricitynews Reporter
Chandigarh 11th January:- The Congress government, if elected, will meet all demands of Distt Bar Association on priority basis. This was stated by Balbir Sidhu the Congress candidate for Mohali Assembly seat, during his meeting with members of Mohali District Bas Association at District Court’s Bar Room here today.
Amarjeet Singh Longia, president of Mohali District Bas Association said that Balbir Sidhu and his family are dedicated to social work from long time. Due to his good work and commitment the people of area had elected him MLA from Kharar and then from Mohali.
Among others, Harjinder Singh Dhillon, secretary of Bar Association, Natrajan Kaushal, Sushil Atri, PK Batish, Mohan Lal Sethia , Harbant Singh , Shekhar Shukla, Manjeet Singh Chauhan, former Deputy Mayor of Chandigarh MC, Amrik Singh Baidwan and Sanjeev Sharma were also presented.
Posted by tricitynews online at 04:22 No comments: 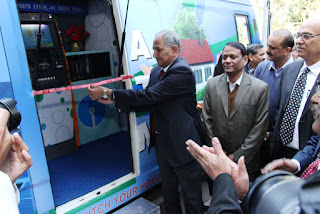 By Tricitynews Reporter
Chandigarh 11th January:- The Chief General Manager, Anil Kishora of State Bank of India, Chandigarh Circle flagged off Mobile ATM Van cum Home Loan on Wheels from Local Head Office, Chandigarh. This Van will cater to the cash withdrawal needs of the customers and also assist them in getting home loan from the Bank.
Anil Kishora stated that this vehicle will be stationed at different places in the markets and surrounding areas of educational institutions to fulfill requirement of cash of the public. The mobile van will supplement the existing chain of ATMs located in the city. This vehicle will move to the required locations so that customers can avail the facility and fulfill their requirement of cash.
He also mentioned that there will be two Bank officials present in the van who will apprise the visitors about features of SBI home loans and will also obtain applications from willing visitors for grant of home loan from the largest lender of the nation i.e State Bank of India.
Posted by tricitynews online at 04:18 No comments: