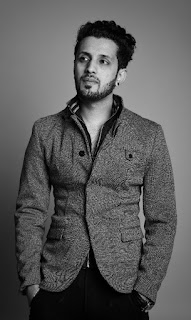 By Tricitynews
Chandigarh 04th September:- There is an abundance of talent still we have shortage of endorsement. When someone tries to come out with his talent, the people of industry make promises to him, but when it really comes to support, most people pull out their hands, says upcoming Punjabi singer Amn. Amn is about to launch his first song soon. He will be achieving this milestone after 5 years of struggle.
Talking about his journey of singing career, Amn said that in the beginning he was associated with many big names of the industry, many of them also inspired him to write and sing, but when time came to launch him, everyone retreated. He said that he was very fond of singing since childhood but never thought that he would make a career in singing field. Amn is a graphic designer by profession and has now started his new career in singing.
Amn hails from Burj Jawahar Singh Wala village (near Bathinda) and came to Chandigarh to pursue a course of animation 10 years ago. On his own he has started a company named "Blackmail Designs" in graphic designing and made a name for himself, now he is taking his singing career forward on his own.
Recalling the days of Struggle, Amn said that it's not that no one supported him. Successful people like J-Star have guided him a lot and are still with him today. Along with this, some of my friends showed overwhelming support in him, Video Director Prince 810 and his friends Gurjinder Maan and Paramjeet Maan are worth mentioning.
Amn expressed his happiness saying that today he is very happy and also want to thank his parents and all his friends for supporting him, due to his talent and their support he is finally going to take the first step towards his dream. Along with this, he requests the people of industry to give new talent a chance so that they do not have to waste so many years only in Struggle.
Posted by tricitynews online at 05:29 No comments: 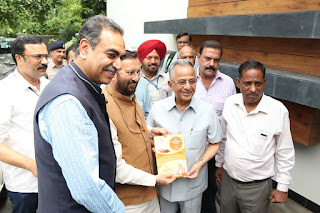 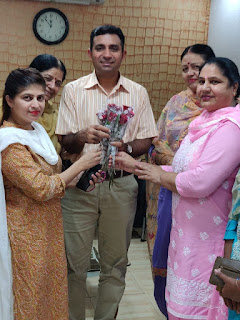 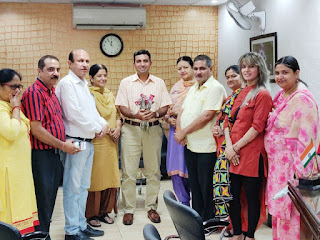 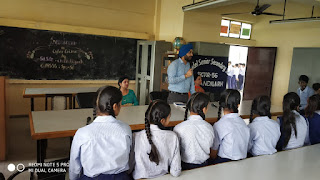 By Tricitynews
Chandigarh 04th September:- A Legal Awareness seminar was organized in Govt. Model Sr. Sec. School, Sec-56, Chandigarh sponsored by State Legal Service Authority, Chandigarh, with great enthusiasm under the guidance of Indrajit Majumdar of this school.
Rajeshwar Singh, Law Officer, SLSA Chandigarh, Ms. Vandana, Ms. Upasana, Rajesh Para Legal Volunteers of SLSA, Chandigarh was the guests of the day. An interactive session with informative lectures was delivered by Rajeshwar Singh, Law Officer, SLSA Chandigarh on legal awareness, including legal advices, legal fundamental rights and duties and cyber crime was emphasized. A lecture on Cyber crime was also delivered by him. He addressed all the students and teachers of this school during the awareness seminar. He also encouraged the students to inculcate good habit, manners and behavioral improvement towards a noble society.
Dr. Ramanjit Kaur, Principal of this school addressed the gathering, presented vote of thanks and appreciated the initiative taken by SLSA towards legal awareness among the students to sensitize the young minds with innovation. She also appreciated the exceptional approach towards a noble cause by the guests of the day.
Posted by tricitynews online at 04:58 No comments: 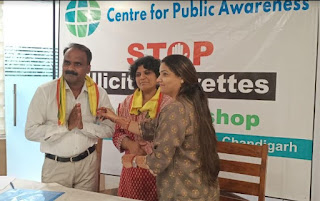 By Tricitynews
Chandigarh 04th September:- In wake of Haryana and Punjab becoming major centres for manufacture, trade and consumption of illicit cigarettes, experts have called for immediate tightening of regulations and administrative crackdown including strict enforcements.
At a media workshop on Wednesday, experts also warned of an impending crisis with implications for health and government revenues in wake of unfettered growth in manufacture and sales of illicit cigarettes in Punjab & Haryana. RK Tiwari of Centre for Public Awareness, said that due to low surveillance and lack of regulations, manufacturers are using the states as dumping ground of illicit cigarettes. In addition to illegally manufactured cigarettes, counterfeit cigarettes are also being smuggled from China and elsewhere. Brands like Win, Black, ESSE, Mond, Pine etc do not carry mandatory 85% pictorial warnings, thereby giving a gullible consumer an impression that these are safer cigarettes.
According to the World Health Organization (WHO), 1 in every 10 cigarettes and tobacco products consumed globally is illicit, however India the situation is very grave, 1 in 4 cigarettes is illegal. In addition to posing serious health challenges for youth, trade in illicit cigarettes is also a potential source of terror funding. “The illicit market is supported by various players ranging from petty peddlers to organized criminal networks involved in arms and human trafficking” according to WHO.
According to Euromonitor International, Illegal Cigarette trade currently accounts for as much as 1/4th of the cigarette Industry in India with more than 25 billion sticks of Illegal cigarettes consumed in 2017. He added that the trade in illicit cigarettes causes an estimated loss of over Rs 13,000 crore in tax evasions to the government.
Cigarette licenses are regulated by the Industries Development & Regulation Act of 1951. Post the 1991 de-licensing, only five industries are under compulsory licensing including cigars and cigarettes of tobacco and manufactured tobacco substitutes. No new licenses have been granted for manufacture of these items since 1999. Yet illicit manufacturing of cigarettes continues using a flaw in the Act.
Pampa Mukherjee, professor at Panjab University, Chandigarh shared that the definition of ‘factory’ under the Act does not make any exceptions on products. It says that units employing less than 50 workers with the aid of power, or 100 workers without the aid of power, can set up a factory without obtaining a compulsory license, and that is where the problem lies.
R K Tiwari further shared that flaunting this loophole, many factories have come up in Punjab manufacturing and clearing cigarettes clandestinely.
Dr Rakesh Khullar of BGJ Institute of Health, Panjab University, Chandigarh said that illegal cigarettes come mixed with hazardous substances including imported intoxicants from China and they are extremely harmful. Experts point out that such illegal cigarettes have five times as much cadmium, nearly six times as much lead and high levels of arsenic. They also contain 160% more tar, 80% more nicotine and 133 percent more carbon monoxide.
A research by the Department of Sciences at John Jay College of Criminal Justice in New York shows that such cigarettes in fact have higher levels of toxic chemicals including tar, nicotine, carbon monoxide, lead, arsenic, and toxic metal cadmium.
Posted by tricitynews online at 04:51 No comments: