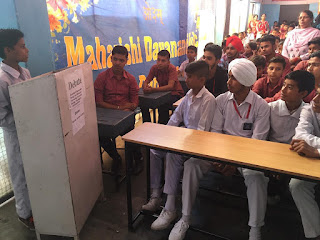 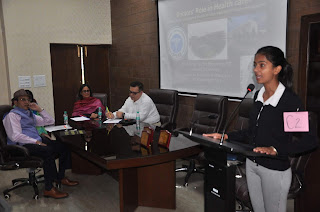 By Tricitynews
Chandigarh 23rd October:- Tricity inter-college debate competition was held under the aegis of NGO- SPEAK India;  Society for Promotion of Ethical and Affordable health Care in collaboration with Post Graduate Government College for Girls(PGGCG), Sec 11 at the college's campus.  The topic of the debate was ‘Doctors have no role in healthcare?’ 14 teams from various colleges participated. Prof Maninder Sidhu of the host college welcomed the guests and participants. While first prize was won by Armand David from DAV College , Sec 10, second position went to Gurmehak Kaur Grewal from PGGCG, Sec 11 and  3rdwas Sumiran Sharma, PGGCG, Sec 42, Chandigarh. The winners were given cash prizes & trophies. Certificates of merit were given to all the participants. The first prize was sponsored by Avtarjeet Dhanjal a celebrated sculptor from UK. The main objective was to spread healthy lifestyle education and to reduce the role of doctors, medicines, tests by 80%. It also aimed to promote oration among the youth and to make them partners in health promotion.
Dr. R.Kumar senior eye specialist and President of the society, who was the principal speaker said that the focus has to shift from the care of the sick to care of healthy population, so that they don’t fall sick. While India cannot afford the luxury of medical or surgical treatment, the only option for us is to go for PRESERVATION of health by following healthy habits and proper life style. We do not have to be medicine minded or test minded but we must be health minded. This is the paradigm shift that is required.
His emphasis was that the people need to think before going to a hospital and they can dwell on the factors that are responsible for making them unwell. These can be things like Smartphone addiction, dehydration, obesity, sleep deprivation, anemia, lack of exercise, over work and over ambition that often lead to stress, sadness and fatigue besides lack of sunlight and inadequate ventilation. He specially castigated wide spread intake of  white poison foods. He also advocated teaching ethics at every stage of education. He appealed to universities to introduce a 4 years course after pre-medical, ’Guide to health and wellness’. A guide will look after the health of 500 persons and will not allow them to fall sick. He will not be called a doctor and will note prescribe any medicine. This will create millions of jobs, increase productivity, improve economy and reduce national expense on disease treatment.
Sarban Singh IAS, Dr. J.S. Thakur Dr. Sharad Prabhakar, Kinny Grewal & R K Garg  also spoke. 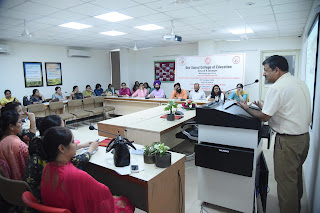 By Tricitynews
Chandigarh 23rd October:- Dev Samaj College of Education, Sector 36-B, Chandigarh, organized one day workshop on 'Maintenance of Standards in Higher Education through Academic Performance Indicator(API) Scores', under the aegis of 'Rashtriya Uchchtar Shiksha Abhiyan' in collaboration with State Project Directorate(SPD), RUSA,Chandigarh Administration. The workshop was inaugurated by the eminent scholar Dr. Dalip Kumar, Assistatnt State Project Director(ASPD), RUSA, Chandigarh. He quoted 'Teaching is not a Profession but a Mission'. He also mentioned recent reforms in higher education and stressed on the use of ICT Resources and basic facilities in the field of research. The workshop proceeded in two technical sessions.
Technical Session-1 was conducted by Professor Rajat Sandhir, Department of Biochemistry, PU. He stressed on increasing the accountability of teachers to improve the standards of higher education by means of professional growth. Technical Session-2 was conducted by Professor A.K. Bhandari, Department of Mathematics, PU. He focused on participants' awareness about the API Scores in different categories at different stages of promotion.
The workshop ended at a good note. Dr. (Mrs.) Agnese Dhillon, Principal of Dev Samaj College of Education addressed the gathering and welcomed the delegates of the workshop. 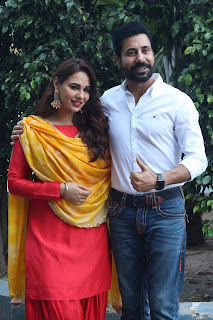 By Tricitynews
Chandigarh 23rd October:- After being global, the Punjabi Film Industry is proceeding with films which carry a different zone, a different track, lot of comedy movies with beautiful punches and jokes which actually tickle your stomach and of course the films which carry a message which is a good sign for the rise of the Punjabi Cinema. And under the series of comic films and after the grand and huge success of “Laavaan Phere”, “Carry On Jatta 2” and “Vadhayiyaan Ji Vadhayiyaan” Director Smeep Kang is all set to direct another comic flick, “Band Vaaje”. The film is going to be made under the banner of Shah An Shah Pictures whose producers are Jatinder Shah who is a renowned music composer and producer, who has been in the industry from last nineteen years and have done more than 60 films and Pooja Gujral, who is known for her successful association with bollywood names like Ajay Devgan and Kumar Mangat and have worked on the films like Omkara, Drishyam, Atithi Tum Kab Jaoge, Kapoor & Sons, Badrinath Ki Dulhaniya and many more. Both of them are known for producing the most prestigious film of Punjabi Cinema titled as “Nankana” starring the legend, Gurdaas Maan.The star cast of the film includes Binnu Dhillon, Mandy Takhar, Gurpreet Ghuggi, Jaswinder Bhalla. The story and screenplay of the film has been written by Vaibhav Suman and Shreya Srivastava, the dialogues have been written by Rakesh Dhawan. Our well-known film distributor Munish Sahni of Omjee Group has taken the charge of guiding and distributing this project worldwide.
The announcement of the film was done by its team here today. Versatile, seasoned actor, Binnu Dhillon along with Mandy Takhar, Gurpreet Ghuggi and Producers Jatinder Shah and Pooja Gujral and the Director Smeep Kang, interacted with the media on this film announcement which is going to be made under the banner of Shah An Shah Pictures and for which the shooting is going to start from 23rd of October, 2018 and is scheduled to be released on 15th of March, 2019.
Smeep Kang, the Director, said that we can’t reveal much about the story of the film at this moment but this film is going to be a mixture of entertaining punches and jokes which is going to be really hilarious. He further added that he believe that film making is the greatest art and there is an unlimited scope of experiment and innovation for which he is always ready.
The lead actress, Mandy Takhar, said that getting an opportunity to work with seasoned artist like Binnu Dhillon, Gurpreet Ghuggi and Jaswinder Bhalla is like a dream come true. He is sure the audience will surely appreciate his performance in this film.
The Producers Jatinder Shah and Pooja Gujral, said that we are happy to announce the second film after Nankana under our production and about the movie as the name says, “Band Baaje”, we are sure that this films will entertain you to the fullest. They further added, that they are proud to get associated with a team like Smeep Kang, Binnu Dhillon, Gurpreet Ghuggi and Jaswinder Bhalla who have done wonders in the films together and the entire Punjabi Cinema rely on these names so much and their presence in the film is always a treat to watch. The music will be prepared by Jatinder Shah. 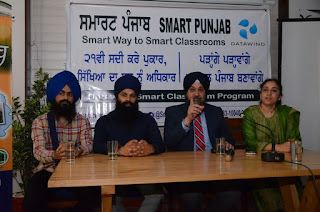 By Tricitynews
Chandigarh 23rd October:- DataWind Innovations Pvt. Ltd., the leader in delivering internet access to emerging markets, is happy to partner with Sikhi Awareness Foundation, Canada (an NGO)in their endeavour to providing the best quality education to the primary schools of Punjab.
APress conference was held today at the Chandigarh Press Club with Shamandeep Singh, Founder and CEO of SAF-International and Rupinder Singh, Executive Vice President- DataWind Innovations Pvt. Ltd. who shared the vision and mission of their organizations. A demo of the Smart classroom setup was also given.
Presently, over 300 setups across the state of Punjab have been done. These have been sponsored by individuals, panchayats, villagers, MLAs, NGOs, organisations as their CSR initiatives. The target is to get all 13,000 government primary schools across the state of Punjab to have this setup.
The set up includes a tablet, with educational content for class 1 to class 5 inclusive of pre-primary class. The content has been approved by PSEB. With this a projector, speaker set, accessories and on-site teacher training on how to operate the equipment and upload new content related to syllabus. This will allow teachers to independently operate the machine.
Rupinder Singh said that we strongly believe in ‘technology for a cause’ and our journey is to connect India’s forgotten billion including empowering children who are the future of the country. DataWind has been working relentlessly towards reaching out to children who cannot afford good education, by delivering affordable tablet PCs  and good quality educational content. He added further that this setup as part of the Smart Punjab project provides support to school teachers in imparting education in an entertaining and fun way. Touching the lives of the children at primary level, when they are most receptive to absorbing all what they see and hear, provides us the motivation to continue striving further. Rupinder Singh said that our journey that started in 2011 with the development of the Aakash tablet computer continues with this “sewa” project. As we look at Digital India, it is imperative that benefits of improved access to technology and internet reach the very bottom of the pyramid. We believe that digitalisation should be integrated with the larger objective of meeting the long-term development goals at the grassroots level.”
Shamandeep Singh shared that there is a steep decline in enrolments in the government schools in India, on top of it, dropout and absenteeism rate is rising. He wanted to bring these children back into schooling by creating new interest in them with this technology.
He shared further that accessibility to computers allow children to receive a well-rounded education and gain additional skills to become better prepared for post-secondary education and future employment. Furthermore, this is an opportunity for SAF to provide supplementary learning material to provide children with more holistic education and knowledge.