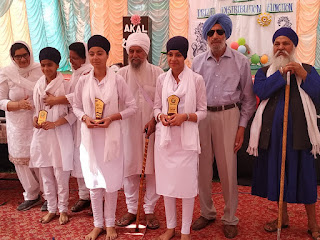 By Tricitynews
Chandigarh 02nd May:- Annual Prize Distribution Function was held at Akal Academy Mander Dona to felicitate the students who excelled in Scholastics as well as Co-Scholastics. The Chief Guest of the function was Dr Khem Singh Gill, Vice President Kalgidhar Trust and Former Vice Chancellor Punjab Agriculture University.  Other Dignitaries who were present on the occasion were Sant Baba Daya Singh, Sardar Harpreet Singh Mander, SP Kapurthala, Amandeep Kaur, Cluster Head Akal Academy Dhanal Kalan.
The programme began with the school choir paying obeisance to the Almighty. The Principal,Manjeet Kaur Mahal welcomed the Chief Guest, the parents and the dignitaries and presented the annual report highlighting the achievements of the school in scholastic and co-scholastic areas for academic year. The Chief Guest awarded mementos to students for excellence in academics as well as sports and congratulated them for their prowess and laudable achievements.
The cultural programme started with the budding dancers of the school expressing emotions and love of God through the dance of the soul. The chief guest Dr   Khem Singh Gil   who while addressing the gathering said that children are the asset of our future and it is the need to guide them in right direction so that in future strong nation would be evolved.
Principal of the school Manjeet Kaur Mahal said that kids’ school is like running a nursery of small and budding plants wherein lot of care and proper guidance is required. She added that this is a task of great responsibility as future of both child and country lies in the hands of teachers.

Posted by tricitynews online at 05:58 No comments:

Jubilee Group to Deliver Possession for Maiden Project in Mohali

By Tricitynews
Chandigarh 02nd May:- Jubilee aims to create modern structures for people to work, play and live in. While keeping up with the commitment of on-time delivery of projects, the Group strives to maintain the highest possible standards in the commercial real estate sector in the Tricity. The Group’s maiden project known for its prime location & practical architecture will set precedence for a whole new level of experience for the residents of Mohali.

Posted by tricitynews online at 05:49 No comments: 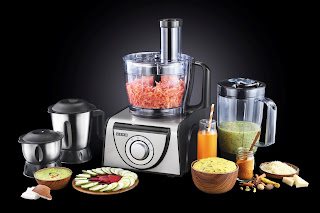 By Tricitynews
Chandigarh 02nd May:- Designed to complement to the people who have hectic schedules and cater to the increasingly health-conscious population of today, Usha International, one of India's leading consumer durables companies, has just launched four new variants to strengthen its kitchen appliances range.
The company has introduced two new products in its food processor’s range ‘Usha Food Processor 3811’ and ‘Usha Food Processor 3810’, both of which will make time spent in the kitchen a lot more enjoyable. Additionally, the company has also added two new models of Usha Nutri Press Cold Press Juicer–CPJ 382F and CPJ 382S, available across major channels – in-store and online. 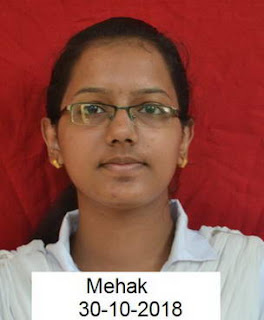 By Tricitynews
Chandigarh 02nd May:- Students of  I S  Dev Samaj School, Sec 21, Chandigarh came out with flying colours in the Class XII CBSE board examination, the results of which were declared today.
Principal Loveleen Bedi said  that our students achieved 100 % result in Commerce, 95 per cent in Science and 98 % in Arts.
Harshdev Guria scored 94.8% in Science and Sameer Rana got 92.6 % again in the Science stream. Mehak scored 90.4 per cent in Arts, while Simran Kaur  got 91.6 % in Commerce.
Posted by tricitynews online at 05:37 No comments: 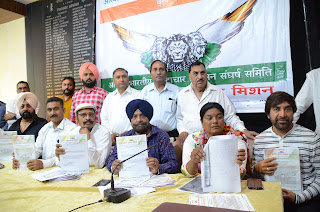 Posted by tricitynews online at 05:31 No comments: