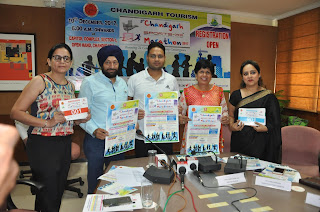 Photo By Parveen Kumar
By 121 News
Chandigarh 24th September:- The First International Chandigarh Marathon,is being organized by ‘Sports 13’ in association with Chandigarh Administration, Sports Department Chandigarh, Athletic Federation of India, and Chandigarh Athletic Association. The marathon will take place on 10th December, 2017 (International Human Rights Day) at the Capitol Complex, Chandigarh from 6 am onwards.
Announcing the mega event at a press conference held today at the UT Guest House, Jatinder Yadav, Director Tourism, UT Chandigarh, said that we are expecting a participation of over 15,000 fitness and sports enthusiasts from the tricity and the region. Athletes from Kenya, Ethiopia and Japan are likely to join us in this grand initiative.
There will be separate categories for Indian and International men and women, besides the veteran male and female categories for 40 plus and 60 plus age groups and few other groups. There will be a Special Run for School Children – School Cool Run – 3 Km with a theme of “A campaign against child assault”; and a Special Run for Females–Femithon-5 km, with a theme of “Women lets stand up for our rights”. A Divyang wheelchair Run will also be held & entry will be free for same. The route measurement shall be certified by AIMS.
Asian Gold Medalist and ace marathoner, Dr Sunita Godara, said that this is a great opportunity for the marathon enthusiasts of the tricity.
Yadvinder Singh, former National Athlete and Director ‘Sports-13’, said that we may be smaller in size when it comes to Delhi Airtel marathon and Bombay Standard Chartered Marathon, or Bangalore 10k but way too different when compared with any marathon in Punjab or the entire North India except Delhi.
It was informed that  a 3-day Marathon Expo will take place prior to the main event  at Leisure Valley, Sector 10,Chandigarh on 7-8 December between 11 am to 8 pm for local participants and on 9 December for the outstation candidates. A 2-day special Marathon Clinic will also be organized by Asian Gold Medalist Dr Sunita Godara.
The participants will get goodie bags, marathon T-shirts, healthy refreshment, water and a route map. There will be medals for all competitive runners and online certificates will be provided for all the participants. Arrangements for public utilities, CCTV cameras, kid zone, baggage counter, and cool zone shall be made. Other attractions include a live band performance, health talkies, eatable stalls, selfie counter.
Kiranjot Kaur, CEO, Sports -13, said that we have tied up with Book My Show, Pay TM, Insider.in and Town script for online registration. The volunteers from ‘Sports-13’ will make the registration process easy by approaching different schools, colleges, universities, corporates, markets, gyms, parlours, shopping complexes and clubs etc.
First time real and reel Milkha will be running together i.e. Flying Sikh Milkha Singh and the Junior Milkha Japtej Singh, while TV personality Mandira Bedi is slated to  be the Face of the Marathon. Other celebrities, who are likely to participate, include Gurdas Maan, Vanya Mishra, Farhan Akhtar, Gippy Grewal and Satinder Satti. A pre-Marathon will be held in the month of November in tricity. For more information, please visit www.chandigarhmarathon.com

Posted by tricitynews online at 07:19 No comments: 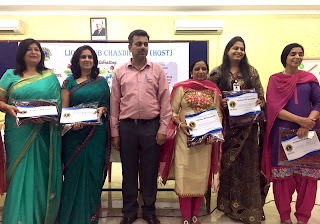 By 121 News
Chandigarh 24th September:- Lions Club Chandigarh host celebrated Teacher Day by honoring prominent teacher from different School of Tri City. MJF lion K K Sawhney, PMCC was the chief guest at the function. Teachers were honoured by lion Lalit Bajaj president of club by presenting them with shawls and certificate of recognition for the noble cause of teacher in society. Lion NK Bajaj gives brief introduction of teachers. Prominent teachers honoured on this occasion where Mrs Urvashi Kakkr principal Gurukul Global School, Mrs Vinod Gupta principle government school Manimajra, Mrs Saroj Sawant Principal Moti Ram Arya School Chandigarh, Mrs Shikha Nijhawan from Moti Ram Arya School, Mrs Ritu Chhabra Assistant coordinator and Shaveta Chawla from Gurukul Global School, Mrs Kavita Modi from Kharrar, Mrs Aman Deep Kaur from Ryan School Chandigarh, Mrs Divya head teacher of lions school.
Bhupendra Singh were also honoured on this occasion other line members were also presented on this occasion Karamvir Singh joint secretary of National Human rights council was also present he told that it is noble cause and it is a teacher who save the character and make the future bright for student he also added that Lalit Bajaj is an active social worker and has been looking after various projects like relief hunger eyes donation awareness programs and he is actively associated with Chandigarh Management Association.
Posted by tricitynews online at 07:12 No comments: 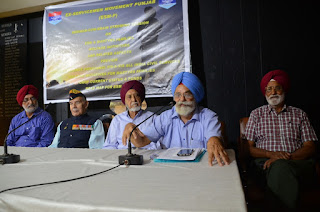 Photo By Parveen Kumar
By 121 News
Chandigarh 24th September:- Indian bureaucracy has been pursuing a relentless campaign in last 40 years to downgrade the status of defence forces personnel with respect to All India Services. Their main aim is to reduce the status of a commissioned officer equal to Group B services officers i.e. more or less closer to officers of a state (HCS/PCS).  Your kind attention is drawn to the following issues and actions taken by bureaucracy. These points have been discussed in the Seminar cum brainstorming session, which was organized by Ex-Service men Movement Punjab at chandigarh press club here today. The session was attend by  Office Bearers of ESM-P ( Ex-servicemen Movement Punjab ) Col B S Rangi-President ESM-P ( Ex-servicemen Movement Punjab ), Wing Cdr Gulzar Singh Mathauda-Vice President ESM-P, Col M S Bajwa-General Secretary ESM-P, Maj P K Dharmani - Member Core Committee : Gave presentation on Armed Forces Ranks vis-a-vis All India Civil Services. The Guest Speakers /on the occasion were Lt Gen S S Brar, Lt Gen P N Hoon (Spoke on Martyrs Families Welfare Initiatives) and Maj Gen Satbir Singh, who Spoke on OROP (One Rank One Pension).
a) ARTICLE 310 OF THE CONSTITUTION OF INDIA -The Status of a defence forces personnel is clearly defined as equal, if not superior to all India services, vide article 310 of the Constitution of India. Yet repeated and continuous attempts have been made by bureaucracy in last 40 years to defy the Indian Constitution.
b) WARRANT OF PRECEDENCE - This document, issued both by President Secretariat and Ministry of Home Affairs, lays down the seniority and relative status of Government functionaries starting from President of India till a Junior Clerk. Yet the bureaucrats in Ministry of Defence have been deliberately ignoring it. Their last letter dated October 2016 particularly has exceeded all the limits of proprietary and have equated commissioned officer with group B section officer.
c) PAY COMMISSION REPORTS  -  Successive Pay Commissions (all members are invariably from IAS/IPS cadre with no representative of defence forces) since 1973 have reduced the pay allowances and grade pays  of defence forces thereby indirectly lowering their status. This has particularly caused functional problems in various defence organisations where civilian and military officials work together. The insensitive bureaucracy has steadfastly brushed aside all representation by defence forces and anomalies of even 4th Pay commission (1980) are still not sorted out.
d) NFU AND OTHER CASES-MoD refuses to implement NFU  for Armed Forces Officers despite having been given to all Group A services, and despite Armed Forces Tribunal  judgment.  It refuses to provide file Notings related to reasons for denial of NFU, as main reason being cited by Babus in MoD is that, AS PER THEM ARMED FORCES OFFICERS CADRE IS NOT A GROUP A SERVICE, but a Group B service, to whom NFU is not applicable, thereby deliberately downgrading  our status with malafide intentions.
e) FUNCTIONING OF MINISTRY OF DEFENCE -
i) Armed Forces Offers have always been equated with All India Services Offrs. JCOs of   Armed Forces have been accorded status equivalent to Group B Gazetted officers by an Act of          Parliament vide Section 3 (xii) of Army Act 1950, but MoD has started equating them with Group C employees. Lts, Capts and Majors are being equated with Group B Officers, Lt Cols with Deputy Dir/ Under Secys (lowest Group A designation) and Cols with Jt Dir/ Dy Secys (2nd Group A designation). A number of letters on these degraded equations had been issued by MoD during last over 20 years and they have issued their latest letter CAO/MoD Note No A/24577/CAO/CP Cell dt 18 Oct 2016 equating Cols with Jt Dirs (2nd Group A designation), and implying equivalence of Lt Cols with Dy Dirs (lowest Group A designation), after misrepresenting facts to then RM.
ii)  The entire case has been fabricated by civilian babus over the years based on one fictitious/ non-existent unsigned letter bearing MHA’s name dated Oct 1968, which quotes Warrant of Precedence to equate Majors with Class II/ Group B Section Offers. When Services HQ finally took notice of these issues, the civilian babus got a letter issued from MoD dt 18 Oct 2016, taking RM’s approval through misrepresentations, formalising the downgraded equations. When lot of hue a cry was made by Armed Forces on Social media, RM detailed a three member Committee in Nov 2016, under instructions from PMO. However, this Committee has been detailed to establish Equivalence not amongst Defence Officers and All India Services officers, but between Defence Officers and AFHQ Civil Service officials, which is a Gp B Service Cadre. All documents/Govt notifications/ legal provisions/   court judgements etc regarding correct status of Defence Officers and JCOs are being brushed aside by MoD bureaucracy, giving primacy only to their own illegal/ irregular instructions.
iii) MoD bureaucracy has refused to implement principle of Universal applicability of Supreme Court/ AFT Orders and Ratio of Judgments   having attained finality to others similarly placed Ex-Servicemen. It implies that only those individuals ex-servicemen, who have won a particular case even in the Supreme Court, are to be benefitted and similar benefits arising out of the favourable judgments are being denied to similarly place other ex-servicemen.
Posted by tricitynews online at 07:03 No comments: