By Tricitynews Reporter
Chandigarh 16th November:- Sri Sathya Sai Seva Organisations, India, (SSSSO India) - a multi cultural spiritual service Organisation, today announced the details of the first International Veda Conference & Multi-faith Symposium at Prasanthi Nilayam on 20th & 21st November. The event is being organized to mark the 92 birthday celebrations of Bhagawan Sri Sathya Sai Baba.
The two-day event will witness mass recitation of Vedas by over 15,000 disciples of Bhagawan Sathya Sai Baba, among who are the 600 participants from across 42 countries around the world. Followers of Sri Sathya Sai Baba will be organizing similar events and recitations across India and it many other parts of the world to mark this occasion.
The event, to be inaugurated by Chief Guest and Honourable Governor of Andhra Pradesh & Telangana, E.S.L Narasimhan, Leading Scientists from India and Abroad who have done extensive research on Vedas are participating in this program as Speakers and will hold sessions on many aspects related to scientific understanding of the Vedas; the modern day society, its challenges, and the solutions that can be derived from the Vedas on subjects like:-Global challenge of water problem and its mitigation by decoding the ancient wisdom of Vedas
·         Vedic pre-history a precedent for holistic meta-science for sustainability
·         The relevance of the Vedas in modern times, within and outside of India
·         Vedic science on agriculture & environment: a remedy to overcome food shortage
Rendition of multi-faith prayers by religious leaders, and symposium of thoughts for global peace will be the highlight, with speakers from all prominent religions and authority on ideologies speaking on the importance of – Service as a unifying factor in all religions.
Commenting on the birthday celebrations and the symposium, Sri Nimish Pandya, All India President, Sri Sathya Sai Seva Organisations said that Sri Sathya Sai Seva Organisations (SSSSO INDIA ) is holding such an important conference and symposium in the times when the message of unity and service are more relevant to the mankind than ever before. We are happy and excited in anticipation of over 15,000 disciples of Sri Sathya Sai Baba converging at the Prasanthi Nilayam, and reciting Vedas and other holy verses For the well being of the world with the theme ‘VASUDAIVA KUTUMBAKAM – That we are ALL ONE FAMILY.
He further added that many prominent religious leaders from around the world will be taking part in the religious symposium that will spread the message of unity and service, which was core of all the preaching’s of Bhagawan Sri Sathya Sai Baba.
Posted by tricitynews online at 04:26 No comments:

By Tricitynews Reporter
Chandigarh 16th November:- Infosys (NYSE: INFY), a global leader in consulting, technology and next-generation services, and ATP, the governing body of men’s professional tennis, today announced the launch of Second Screen, a new feature providing player performance insights within seconds of a point being played.
The Second Screen capability offers valuable information on the strengths and weaknesses of players, enabling them and their coaches to review strategies and improve performance. Additionally, for the first time, fans will be able to look at the data of their favourite tennis stars during the match, interact with it and detect subtle changes in player strategies, such as variations in ball speed, spin, placement and player positions. The increased story telling potential that the Second Screen brings to tennis will be a huge benefit to broadcasters and commentators. Access to player activity in real-time will enable them to provide more insights to the fans watching in stadia, online, or on TV.
Implemented for the 2017 Nitto ATP World Tour Finals, the Second Screen feature has been built by Infosys in under three months using its Artificial Intelligence platform, Infosys Nia. The technology allows for multiple sources of data – chair umpire, player and ball tracking, as well as historical data – to be presented to players, coaches and fans. In doing so, users get foresight into player and match performance, resulting in a much more immersive experience.
Infosys and ATP have built the Second Screen feature primarily for tennis, but the potential uses of the technology powering it are vast, with the ability to impact the world of sport and completely change how players, coaches and fans consume content.
Rajesh Krishnamurthy, President and Head of Infosys Europe, said that this year, Infosys is taking machine-learning in sport to a new level. Our work with the ATP in building the Second Screen using Infosys Nia, showcases the power of AI technology in delivering real-time insights, and more importantly, foresights. We are now able to help players and coaches reach new levels of excellence, while giving fans a more interactive, and immersive experience. We believe this has huge potential not just in tennis and other sports, but in every other business sector.
Chris Kermode, ATP Executive Chairman & President, said that the Second Screen feature will provide greater insights into our sport, as we look to leverage data to enhance engagement in the ATP World Tour on our digital platforms. This is an exciting new development in our partnership with Infosys, and it’s great to work with such a dynamic organization that understands our sport and can deliver advanced analytics.
Posted by tricitynews online at 04:19 No comments: 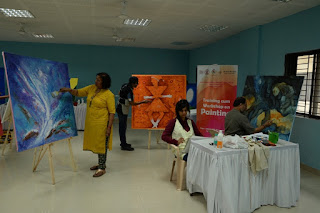 By Tricitynews Reporter
Chandigarh 16th November:- Under the ‘Ek Bharat, Shreshtha Bharat Mission’, the philosophy of which is ‘oneness’, the Chandigarh Administration and Chandigarh Lalit Kala Akademi, in collaboration with the Government of Dadra and Nagar Haveli and Department of Tourism, have been working on an exchange programme, which encourages artists of both the Union Territories to visit and share their knowledge and expertise with each other through workshops, seminars, demonstrations and exhibitions.
As a part of the on-going endeavour that celebrates unity in diversity, Chandigarh and Dadra and Nagar Haveli have yet again joined hands to create a colourful, absorbing and unique one-week programme, curated and conceptualized by the Chandigarh Lalit Kala Akademi. A training-cum-art workshop by artists from Chandigarh, audio-visual presentations, demonstrations and exhibitions with the artists of DNH was organised for the students and art lovers of Dadra and Nagar Haveli, in Silvassa.
A space for creativity was created at Dadra and Nagar Haveli by the Chandigarh Lalit Kala Akademi and eminent artists. It is a creative collaboration that strives to get on one platform, different artistic sensibilities and also connect art to the common people and students of schools and colleges. Several initiatives by the Chandigarh Lalit Kala Akademi has given the thought a concrete form, with several artists from Dadra and Nagar Haveli travelling to Chandigarh for 17’s Collision, an art workshop and showcase, live painting at the Rock Garden and other events.
Senior and young artists from Chandigarh travelled to Dadra and Nagar Haveli to create a creative confluence, which was inaugurated by Mohit Mishra, Deputy Director, DNH Tourism and Bheem Malhotra, Chairman, Chandigarh Lalit Kala Akademi on November 13, 2017. Mohit Mishra welcomed the eminent artists of Chandigarh – Viney Vadhera, Ravindra Kumar Sharma, Sadhana Sangar, Surendra Mohan Dhami, Bheem Malhotra and Tanvi Rana.
All the artists from Chandigarh have been involved in demonstrations on various techniques of art and have conducted several interactive sessions with students of schools, colleges and also art lovers of Dadra and Nagar Haveli. These demonstrations bring many closer to the process of the creation of art, bringing it out of gallery spaces, and facilitating a deeper engagement and understanding of it. An exhibition of the works created in the workshop by the students and artists of both the Union Territories will be showcased for the public at Vanganga Garden, Dadra, on November 18.
Commenting on this unique exchange of art & culture, Bheem Malhotra said that art is the most suitable medium to create a rainbow of emotions. These eminent artists will also join the local artists to sculpt some outstanding moments, capturing the beauty of this great mission. An idea can be successful and far-reaching with the involvement of youth. In this training-cum-art workshop, students from schools and colleges will take the deeper meaning of this effort further, creating a space for people to come together and create a brighter tomorrow.
Posted by tricitynews online at 04:14 No comments: 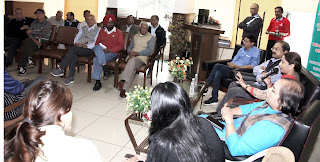 By Tricitynews Reporter
Chandigarh 16th November:- November 16 is commemorated in India as the National Press Day (NPD). This year being the valedictory of the Golden Jubilee Year of the Press Council of India, the National Press Day is being celebrated at the National Level by giving a platform for Indian participant delegates from World Association of Press Councils (WAPC), Media Councils and Similar Bodies and the Media across the world to discuss media ethics and pressures. The deliberations this year are centered on “Challenges before the Media”. Simultaneously the National Awards for Excellence in Journalism will also be conferred to those excelled in field of Journalism.
As a part of the celebrations, to commemorate the National Press Day at the State & Union Territory level jointly with press organizations/journalists institutions, the Department of Public Relations, Chandigarh Administration in association with the Chandigarh Press Club organized an Open Forum that centered on “Challenges before the Media”. Media Veterans were invited from print; electronic & digital mediums to share, discuss and ponder over the challenges faced by the journalists during the early years and in the present times. With the wealth of collective experience & knowledge, the veterans not only shared the challenges, but also guided the journalists on how they can overcome obstacles, maintain their credibility & achieve excellence in the field of journalism.

Posted by tricitynews online at 04:07 No comments: 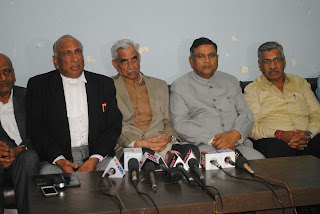