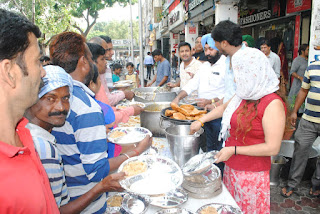 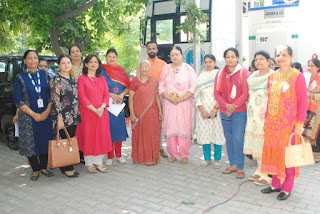 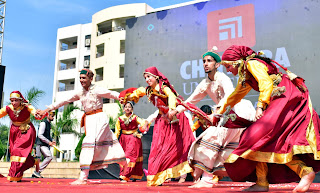 By Tricitynews
Chandigarh 05th October:- Chitkara University, Himachal Pradesh, today hosted the North India's largest annual cultural festival Algorythm, at the University campus. This year, the festival brought together a huge number of 5000 students & teams from 70 different institutes, across India and abroad, for a day packed with events ranging through all categories and a celebration of culture &talent like never before!
Chitkara University believes Cultural Festivals are not just for fun, they add value to a student’s learning experience – the most effective way of bringing youth under the same platform, enhance social interaction and facilitate exchange of cultural ideas and thoughts. Dr. Madhu Chitkara, Pro-Chancellor, Chitkara University, Himachal Pradesh; said that Algorythm Festival is a grand celebration of culture, diversity, talent, friendship and collective & individual aspirations, in the field of arts, culture, literature and other activities.  She opined that the ultimate goal of the cultural fest is to help students stage their talent and get recognition, while also learning from shared experiences, skills and talent.
Celebrating the future torchbearers with a fiesta which is all about bringing together creativity, intellect and talent of the youth, this year's event line-up had major events including, Vogue, Stomp The Yard, Fantastic Toe, Folklore, Halla Bol, Euphonious Fusion; fun & game events including, FIFA 19, Four-A-Side Soccer, CS Go, 8 Balls of Fire, 3-on-3 Basketball, NFS, PUB-G, Art Nouveau, Paintball, Zorbing, Top-It-Up; and a mega contest to grab the coveted title of ‘Mr. & Ms. Algorythm 2k19’. Each event had participants in huge numbers and an equal number of enthusiastic supporters - displaying a fantastic fusion of competitive spirit and friendly vibe.
The throngs at the fest were a testimony to the sheer magnitude of the event. "Celebs, music, fashion, glamour, fun, friends - we can't even begin to describe what CUHP Fest Algorythm means to us youngsters!" exclaimed a group of students participating in the fest. Indeed, this year’s Algorythm was a potent mix of electric energy and exciting activities that made for a day full of memories that would last for a lifetime.
Algorythm 2k19 concluded in a glittering ceremony at the campus, with a prize distribution ceremony where the winners were given cash certificates and goodies. An electrifying performance by Punjabi singer-actor Mankirt Aulakh closed the event on a high note, as he set the stage on fire with his chart-busting numbers on the backdrop of Technicolor lights and grooving audience.
Posted by tricitynews online at 03:52 No comments: 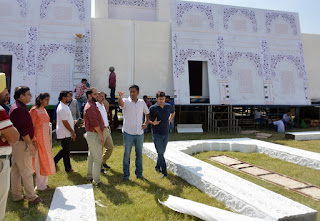 By Tricitynews
Chandigarh 05th October:- The three day long light & sound show-cum-digital museum commemorating 550th birth anniversary of Sri Guru Nanak Dev, the first Sikh master, will take place at Sports Stadium Sector-78 from October 7 to October 9. Punjab Chief Minister Captain Amarinder Singh will inaugurate state-wide series of the extravaganza from district SAS Nagar.
It was disclosed by Deputy Commissioner  Girish Dayalan, while he was taking stock of the arrangements at Sports Stadium along with Additional Deputy Commissioner (Development) Mrs. Aashika Jain and SDM. Jagdeep Saigal. Presiding over a review meeting on the event spot, the deputy commissioner exhorted the officials of the district administration to ensure grand success of the event and make all necessary arrangements well in advance.
Divulging the details of this grand event, the Deputy Commissioner said that celebrating the spiritual fervor of the 550th Prakash Purb, the digital museum and the Light & Sound Show will be held on the first day. He said that the digital museum will open to the public all day, while two Light & Sound shows, based on the life and philosophy of the Guru Sahib will be presented in the evening. He added that on the second day, only digital museum will open, while both the digital museum and light & sound show will depict the life journey of Sri Guru Nanak Dev ji on third and last day.
The Deputy Commissioner instructed the officials of various departments to ensure the necessary arrangements for the event. He said that no laxity and negligence will be tolerated. “As these shows would be organized all over the state starting from Mohali, thus no stone should be left to un-turn for the success of the event, he categorically added. He appealed to the people to whole-heartedly participate in this event, which is being organized to mark the 550th Parkash Purb of Guru Sahib. He said that entry for the event is quiet free and all the arrangements have been taken place for the convenience of the visitors. He also exhorted the officials to aware more and more public especially villagers about the show, so that they would not be deprived of this special spiritual program.
Additional Chief Administrator, GMADA Rajesh Dhiman, Civil Surgeon Dr. Manjit Singh, Assistant Commissioner (General) Yashpal Sharma, District Sports Officer Surjeet Singh, SDO PSPCL Harbhajan Singh Kang, Sub-Registrar Ravinder Bansal, Mandeep Singh from GMADA and the representative of the CS-Direct were present on the occasion.
Posted by tricitynews online at 03:46 No comments: