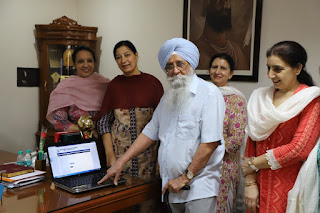 By Tricitynews
Chandigarh 01st June:- The College Prospectus of Guru Gobind Singh College for Women, for the Session 2018-19 was released by Col (Retd) J S Bala, Secretary, Sikh Educational Society and the College Principal, Dr Jatinder Kaur on June 1, 2018. The Prospectus is available on College Website, www.admission.ggscw.ac.in for Online Admission, as well as on campus for the coming session. Last date for the submission of application forms is July 5, 2018 and classes for all courses will commence from July 24, 2018.
Guru Gobind Singh College for Women is currently running Undergraduate courses in BCA (40 Seats), B. Com (280 Seats), BSc (NM/CSc) 80 seats, BA with open seats, and Post Graduate courses including MSc-IT (40 seats), M Com (80 Seats), MA Sociology, English and Economics with 60 seats each.
The Principal stressed on the College’s continuous efforts towards imparting quality education to young women as the College provides various incentives like free ships and scholarships to meritorious girls. The College takes pride in its achievements in sports and cultural activities.

Posted by tricitynews online at 06:28 No comments: 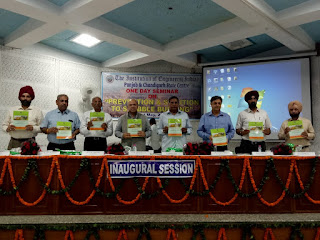 By Tricitynews
Chandigarh 01st June:- The One Day Seminar on “Prevention & Solution to Stubble Burning” was organized by the Institution of Engineers (India), Punjab & Chandigarh State Centre in its premises at Chandigarh which was widely attended by all concerned.
Inaugural Session of the function was graced by Dr. S.K. Pattanayak Secretary, Ministry of Agriculture & Farmers Welfare, Govt. of India as Chief Guest. Vishwajeet Khanna Additional Chief Secretary, Deptt. of Agriculture, Punjab, Dr. Ashwani Kumar, Joint Secretary to Govt. of India, Deptt. of Agriculture & Farmers Welfare and Kahan Singh Pannu Secretary, Agriculture, Punjab and Chairman Punjab Pollution Control Board participated as “Guest of Honour”. J.P.S. Bindra, General Manager, Nabard, Punjab Regional Office, Chandigarh also participated in the event.
Er. J R Grag Chairman of IEI Punjab Chandigarh State centre welcomed all participants. Nutan K. Dash Chairman, Agriculture Division Board IEI, delivered his address on the theme. Er. PS Bhogal organizing chairman of this seminar presented vote of thanks and also latter presented outcome of this seminar. Valedictory session at the end of seminar was chaired by Er. HCS Berry Past President IEI as Chief Guest. The Key Speakers of the Inaugural/Technical Session–1 Indra Mani Mishra, Head, Agriculture Engg., ICAR- IARI New Delhi and Dr. Jaskaran Singh Mahal, Director, PAU Ludhiana presented on the various issues of Stubble burning involving the challenges and solutions to this issue.
Punjab and other North Western States, neighbouring NCT of Delhi facing Crop Residue Burning for the past 30 years, will now get some relief as the Central Government has joined the state of Punjab for providing enhanced subsidy for farmers  on Agricultural Machinery & Equipment for in-situ management of crop residues. The State of Punjab & other States has been assisted by Govt of India through the active involvement of Prime Minister's Office and the Agriculture & Farmers Welfare Ministry. This has been stated by Dr S. K Pattanayak, I.A.S, Secretary to Government of India in the Ministry of Agriculture & Farmers Welfare, while inaugurating a seminar on Prevention & Solution to Stubble Burning at Engineers Bhawan, Chandigarh. He expressed that everyone is proud of the contributions made by the farmers of the state in producing food grains for the country in hard times but as other states have also followed in terms of production of food grains, the Punjab farmers need to diversify to other crops with more sustainable and locally appropriate systems of production and income from agriculture sector.
The Guest of Honour on the occasion, Additional Chief Secretary, Development, Viswajeet Khanna, addressing the gathering expressed his views that the Punjab has sacrificed its natural resources in terms of water and soil health while producing more food grains for the country in difficult times. Government had to take a saviour step to implement "Punjab Sub Surface Water Preservation Act, in 2009," to put a check on falling ground water that has resulted in shift in transplanting date of Paddy. But this has reduced the time window available for only 15-20 days, between the harvesting of paddy and sowing of wheat & other crops .Secondly, the farmers in Punjab has been growing high yielding varieties of paddy that are also generating huge volume of straw, which is not possible to manage and has escalated the problem resulting in large scale paddy straw burning .
The One Day Seminar organised by Institution of Engineers , Punjab & Chandigarh State Centre for finding solutions to prevention and solution to stubble burning here in Engineers Bhawan , Madhya Marg, Chandigarh. The Institution having its strong base and known for its activities in the country can provide more practical solutions to the problem in the near future. The Seminar attended by delegates from Govt. Departments , Central Institutions , Students from engineering colleges , Progressive Farmers and representatives from industry.
Addressing the delegates, Joint Secretary informed that the cabinet in Government of India has approved a New Centrally Sponsored Scheme for Promotion of Agricultural Mechanization for  In-Situ Management of Crop Residue In the States of Punjab, Haryana, Uttar Pradesh and NCT of Delhi, vide which state of Punjab will get Rs. 665.00 crores over a period of 2 years with large scale awareness activities, media campaign, and demonstration of equipment. Under this scheme, 80% subsidy will be provided on single or multiple equipment for In-Situ crop residue management equipment to PACS or Farmer Groups or FPOs  on the Project Cost of Custom Hiring Centre (CHC) for Farm Machinery Banks ranging from 10.00 lakh to 75.00 lakhs and 50 % subsidy to individual farmers for procurement of  these equipment.
Punjab Pollution Control Board, Chairman and Secretary Agriculture, Kahan Singh Pannu, enlightened the gathering, as how far stubble burning is causing damage to soils in the state as well as the production levels besides the environment.  Taking a step towards the solution to the problem, the owners of Combine Harvesters in the state have been intimated that no combine harvester will be allowed to operate in the state during forthcoming paddy harvesting season & there onwards, without Super Straw Management System, which is helpful in chopping and widely spreading the paddy straw has been made mandatory under the Air Act ,1986.
Other Speakers Manmohan Kalia, Nodal Officer Crop Residue Management, Agriculture Department, Sandeep Garg of Eco Laboratories, Dr Sucha Singh Gill , CRRID also addressed the gathering . It has been proposed that the Governments should promote the all known technologies & practices on-board, may it be Residue Management by keeping paddy or wheat straw as mulch and sowing wheat or other crops in the mulch itself or Incorporation of residue in to the soils  and may it be Collection & Removal of Straw out of the fields  as per the local requirements and other techniques such as Compost Making , Generation of Bio CNG , Bio Ethanol , Pelletisation for cattle feed & fuel cakes etc.

Posted by tricitynews online at 06:19 No comments: 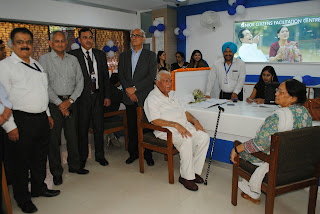 By Tricitynews
Chandigarh 01st June:- State Bank of India has operationalised a Senior Citizen Facilitation centre at its Personal Banking Branch in Sec-8, Chandigarh. The Branch layout has been designed to suit the requirements of Senior Citizens.
The Facilitation centre was dedicated to serve the Senior Citizens on 1st June 2018 by Anil Kishora, Chief General Manager of SBI, Chandigarh Circle in the presence of Sanjay Kumar, General Manager Network-I, Surender Rana, General Manager, P. K. Mishra, DGM (B&O), Chandigarh, O.P. Kakroo, RM, Chandigarh and other Bank officials.
While interacting with media Anil Kishora, CGM said that the Branch is equipped with ATM, CDM (Cash Deposit Machine), GCC (Green Channel Counter), Swayam Passbook printing machine, Internet Banking kiosk & other equipments. Employees at the Branch have been adequately skilled & sensitised to hand hold and support Senior Citizens in using these facilities. He added further that the Branch will be conducting awareness drives every month to make Senior Citizens aware of Cyber Security requirements and will share security tips to keep their money safe.
Anil Kishora said that the Branch offers locker and instant account opening facilities, deposit products and various Loan products including Pension Loan as per Bank’s eligibility criteria. Senior Citizens can submit digital life certificate, make nomination in their accounts and can also avail of Financial Advisory services under SBIExclusifWealth Management platform.
All Pensioners banking with any branch of SBI are welcome to visit & avail of the premium services of this branch. During the first week of every month, the Branch will provide services for extended working hours.
A number of Senior Citizens & retired Senior Govt. officials graced the occasion and complimented the SBI Team for this initiative to make Banking more convenient for Senior Citizens. They highly appreciated the ambiance and layout of the branch which is customized to the requirements of the senior citizens- with low height counters; chairs placed in a configuration friendly to senior citizens; easy access of wheelchairs to the lobby and the sitting lounge etc.

Posted by tricitynews online at 06:01 No comments:

By Tricitynews
Chandigarh 01st June:- Commencing its admission process for the academic year 2018-19, Pearl Academy, today announced admission to postgraduate and undergraduate courses for Design, Fashion, business and Media across all campuses.
The last date for submission of application forms is June 11, 2018. The Entrance test will be held on June 16 in all four Pearl campuses in Delhi, Mumbai, Jaipur and Noida along with the upcountry locations such as Kolkata, Pune, Lucknow, Bhopal, Raipur, Nagpur, Patna, Chandigarh, Chennai, Ahmedabad, Dehradun, Ludhiana, Bangalore, Hyderabad, Varanasi and Guwahati. Candidates will be selected on the basis of their performance in the written test (general proficiency test/design aptitude test/media aptitude test) and personal interview.
Prof. Ujjwal K Chowdhury, Head of School, School of Media at Pearl Academy said that Pearl Academy has always been at the forefront of providing students with the best faculty coupled with international exposure and on-ground experiences. Our students have delivered excellent results in their respective fields and I am sure they will shine after they step out and enter the real work environment. The School of Media in our academy educates students on all aspect of digital and new age media so that all avenues of storytelling can be explored across platforms.
This year’s graduating students have found excellent placements across global companies such as Accenture, Walt Disney, IBM, Capgemini, NDTV, Vogue, Godrej, Future Group, TCS, Burberry etc. Over the years, through collaboration with global universities, international brands and celebrated professionals, Pearl Academy has offered global exposure to its students.  Industry integrated learning, live projects and internships ensure that the Pearl students graduate as career ready professionals.
Pearl Academy is the only Indian educational institute to be ranked among the top 25 fashion schools globally by Business of Fashion and has been judged as the Best Design Institute by Assocham for the third year in a row.

Posted by tricitynews online at 05:53 No comments: 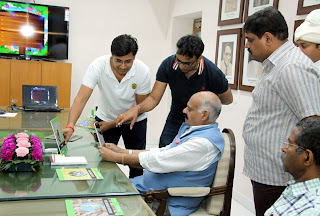 By Tricitynews
Chandigarh 01st June:- The Governor of Punjab & Administrator, U.T Chandigarh V.P. Singh Badnore today launched the Digiwings application at Raj Bhawan in the presence of J.M. Balamurugan, Secretary to Governor and Ajit Balaji Joshi, Deputy Commissioner, UT, Chandigarh. Digiwings is an Augmented Reality based Digital Experience at Sukhna Lake. A one of its kind initiative by Chandigarh Administration for the nature lovers and Tourists.
Digiwings app has been created by Shashi Bhardwaj, Founder of Jaipur based smart solutions firm, Auriga IT Solutions with the joint efforts of Chandigarh e-governance society and Y S Bains, President Corporate Affairs, Reliance JioInfocomm Ltd. Digiwings provide a real life experience of a wide range of birds with their animated models, sounds and information. Citizens can get pictures clicked with birds of their choice from the app and also know complete information about them. The  Augmented Reality is a live direct or indirect view of physical, real-world environment whose elements are "augmented" by computer generated or extracted real-world sensory input such as sound, graphic, video, haptics or GPS data.
The Digiwings app is available on Google Playstor and Apple Playstore.
Posted by tricitynews online at 05:49 No comments: