By Tricitynews
Chandigarh 13th September:- Usha International, one of India’s leading consumer durables companies, today launched a new campaign including both digital and TVC for its recently launched Racer fans. This range is endorsed by Narain Karthikeyan, India’s first Formula One driver, who embodies its spirit. Aimed at filling the need gap for ultra high-speed fans with superior air delivery, the Racer fans cater to the evolving consumer who wants that ‘little bit more’. The campaign is also supported by BTL activations including promotional scheme for trade partners, and in-shop promotions, across India.
Set on a racing track, the TVC starts with Narain Karthikeyan in his driving suit as he pulls on his gloves, picks up his helmet, and walk towards his Formula One car. Cut to the flag off point, where Narain gives thumbs up to start, and the black and white checkered flag signals the start of the race and the cars vroom ahead. The final lap, Narain zooms across the finish line to emerge the winner. Cut to Narain walking into his tropy filled room, placing his helmet and picking up the remote to switch on the Racer ceiling fan by Usha International. The TVC is about technology, innovation and speed, the characteristics of a quintessential racer, and each of which are an intrinsic part of Racer fans. The TVC ends with glimpses of the Racer fans range and Narain urging viewers to “Live like a Racer”.
Commenting on the campaign, Sandeep Tewari, President-Marketing, Usha International said that at Usha, we believe in a tech for all approach to give customers what they want, so we constantly innovate and launch technologically advanced, superior products that makes their lives better. The Racer fans is the result of customer demand for a superior technology offering high speed air delivery and we are optimistic with these fans we will be creating a new segment for ultra high-speed fans.
Commenting on his association with Usha International, Narain Karthikeyan, India's first Formula One driver said that he is extremely thrilled to be associated with Usha International for their Racer range of fans. Usha is definitely one of India’s most loved and trusted brands and filming for Racer -with racing cars, racing gloves and helmets was intense and exciting. These remote controlled fans are convenient and pretty awesome.
Posted by tricitynews online at 05:51 No comments: 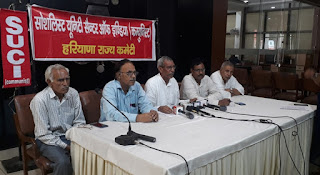