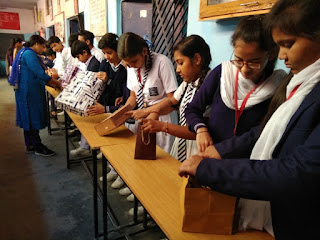 By Tricitynews
Chandigarh 24th November:-Maharishi Dayanand Public School, Daria, Chandigarh organized a workshop in which students learnt how to prepare paper and jute bags in collaboration with the Department of Environment, Chandigarh Administration .The workshop was conducted under the guidance of Art and Craft teachers Mrs. Kiran Prabha and Mamta. The students were told about the pollution caused by plastic bags, which cannot be destroyed easily. These decreased the productivity of land and growth of plants.  Plastic bags contain germs which become harmful when eatables are kept in it. Such bags also harmful for animals. Plastics bags pollute water of the rivers.
Telling about the utility of the jute and paper bags the students told that these bags are biodegradable and environment friendly. It does not emit toxic gases and harmful chemicals. These bags are useful for packaging materials.
Principal, Dr. Vinod Kumar said that the aim of this workshop was to train students for making paper and jute bags. He praised the students for participating in the environmental activities with zeal and zest. 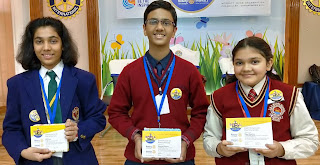 Posted by tricitynews online at 03:50 No comments: 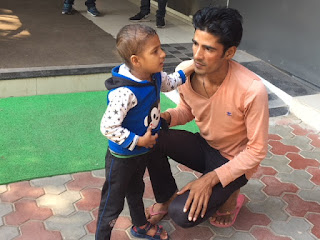 By Tricitynews
Chandigarh 24th November:- Navsankalp association a student run organisation based in tri-city( Chandigarh) and completes its 12 years of service on 2nd of November. Till date Navsankalp has contributed 62 lacs and has saved 165 lives.
While interacting with media President Navsankalp Association, Shubham Sharma said that Navsankalp endowed the sum of 36000 INR to 4 year old girl named “Pari Chauhan” afflicted by “Global development delay with spastic diplegia (cerebral palsy) and is 95 % diseased” Pari medicated under “PGIMER, Chandigarh”.  Pari- is the d/o Pardeep Chauhan ( who has a seasonal occupation depending upon work available ) and Mrs. Sunita Devi (housemaker). Monthly wage of the family is 1000-2000 INR. The patient underwent her first seizure on 1st May 2017.
He added further that she was admitted to hospital on 7th July 2017 and the prolongation of the treatment is expected to go upto 5th July 2022 and initially the half yearly expenditure was paid off by the organisation. Rough estimation of her monthly medicines is 6000INR and Navsankalp appealed the outer world to come forward and be a helping hand.
On this occasion Akanksha Gupta, General Secretary, Navsankalp Association, Ravinder Chaudhary and Kulbir Kaur along with the association team members were also present.

Posted by tricitynews online at 03:39 No comments: 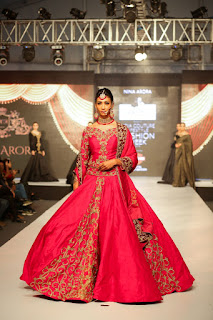 By Tricitynews
Chandigarh 24th November:- High couture fashion and ultra glamorous makeovers remained USP of this star studded night, as 2nd season of India Couture Lifestyle fashion Week reached its Finale. India's Super models Laxmi Rana, Saud Khan and Bollywood heartthrob Dino Morea upped the glam quotient to the event as they showcased vivid trends of couture fashion and looks on the ramp, joining them on the ramp were stunning models during back to back shows that took place for two days.
Highlight of the event remained exquisite makeovers created by ace makeover expert Mallika Gambhir who unveiled most glamourous and high couture makeover trends for year 2019. From timeless , traditional to contemporary, from Indo western to bespoke, melange of looks and diversified makeovers were put on display by Mallika Gambhir that celebrated vivid occasions and customs. Sheen of magnificent high couture fashion exuded the ambiance and illuminated the ramp. From timeless traditional to  uber cool contemporary, from Indo western to bespoke, melange of looks was showcased and celebrated in all its diversity and glory. Sheen of spectacular Indian weddings and customs exuded the ambiance and illuminated the runway. Spectacle of ebullient makeovers based on riveting concept  explored luxury and unveiled hottest trends for upcoming season.
Bollywood's star Dino Morea looked dapper and stole hearts  as showstopper for the show. Stunning Models  sashaying down the ramp in beautiful looks with edgy hairdos took the show to pinnacle of glamour in makeovers from Mallika Gambhir, Her n Sir and Persona.
Explaining inspiration behind the looks for the show Mallika Gambhir stated that show remains the most coveted event and we feel honoured to be part of it for the second time in a row. Through the show we have en devoured to amalgamate contemporary aesthetics with traditional finess, We have presented trend setting looks that will remain in vogue in year 2019.
Organizers of India Couture Lifestyle Fashion Week, Vibhor and Gaurav Gupta stated that this was second season of the show, 1st show was unveiled in Dehradoon and second here in Delhi, we plan to travel with the show in entire country and we are thankful to all designers, models and associates for making this event larger than life and super successful.
Style sootra, Angaza silver, Brand tahera, Designers Mazhar and Prashant, Nimisha Soudriyal, Shivraj Rathore, Shahid Rashid, Vipin Aggarwal, Mini Gulati, Kingshuk Bhadri, Dimple Kapoor, Sonali Malhotra, Saara Miraz, Divisha Jangri, Nick Roshan, Nisha Waadhwani, Mehak Hirani, Heena Bilani, Meety Bagga, Show director Shie Lobo, choreographer Kapil Gauhri, Space institute of design and innovation, swaraa institute of performing arts participated in the show.

Posted by tricitynews online at 03:26 No comments: