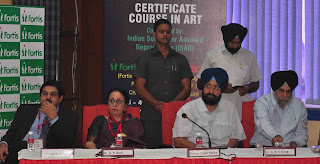 By Tricitynews
Chandigarh 03rd November:- Providing the much needed ray of hope to hundreds of childless couples in the region, Indian Society for Assisted Reproduction (ISAR) today launched its Chandigarh Chapter. In a gala event held here, the Chapter was initiated by Rajya Sabha MP Pratap Singh Bajwa in the presence of Dr. Nandita Palshetkar (President Elect-FOGSI, Vice-President of ISAR, Ex-President-IAGE & MOGS) and Dr Hrishikesh Pai (Imm. Former Secretary General- FOGSI, Member - Board of Directors of IFFS, Ex-President- ISAR, IAGE & MOGS). Founder Chairperson of Chandigarh Chapter Dr GK Bedi and Founder Secretary Dr Pooja Mehta also graced the event.
Indian Society for Assisted Reproduction is the oldest organisation for specialists in the field of Assisted Reproductive Technology since its establishment in 1991 in Hisar. Ever since, it has grown from strength to strength with over 3000 members and 19 state chapters, including gynaecologists and embryologists.
Speaking on the occasion, Dr. Nandita informed that ISAR conducts many large conferences and focused workshops across India to reach out to maximum number of specialists, offering training and mentoring of young people who are specialising in the field of ART. Regular newsletters are being published and ISSR brings out respective journals from time to time in super specialised topics.
This first launch educational program was organised in association with Fortis Bloom IVF Centre where a two-day workshop was conducted and ISAR certified course was given to more than 150 doctors.
Shedding more light Dr. Hrishikesh Pai said that we had a lot of excellent lectures coupled with live video demonstration of ART techniques such as IVF iCSI vitrification semen preparation etc. Burning issues such as implementation of pcpndt act, as well as the art bill was discussed in detail by experts in the field. Many eminent faculties from all over India shared their knowledge and expertise. The main objective of this course is to enable the participants to be well versed with reproductive endocrinology, ovarian stimulation, male factor infertility and art.
Meanwhile, Dr. G. K. Bedi highlighted that behind India’s booming population is another story of declining fertility rates and desperate couples. Dr. G. K. Bedi said that couples, whose lives are wrecked with social pressures and guilt of not being able to procreate. ISAR, one of the largest organizations, trains, motivates, educates and orients doctors in this evolving field of infertility. We are indeed proud to have an ISAR chapter in Chandigarh today.
Reiterating ISAR’s motive Dr. Pooja Mehta said that breaking boundaries, creating families. The ISAR Chandigarh chapter is here to help you tide over various infertility situations.

Posted by tricitynews online at 06:07 No comments: 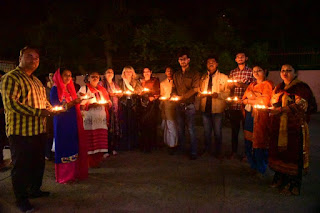 Posted by tricitynews online at 06:01 No comments:

By Tricitynews
Chandigarh 03rd November:- Bringing forth an idea to preserve environment by preventing pollution, responsible Chandigarhians in association with Reliance Broadcasting & Chandigarh Tourism joined hands at “Big Khushiyon Ki Diwali” and pledged for Eco friendly Green Diwali celebrations this year.
To encourage traditional way of celebrating Diwali in which homes are decorated with lamps & to celebrate a noiseless and pollution free Diwali this year by not bursting firecrackers, more than 1,000 Students and Tricity Residents joined hands and gathered at “Big Khushiyon Ki Diwali” in Sector 17 Plaza to take a pledge that the city will instead light candles and donate money to a charitable cause. The decision was taken in a bid to spread awareness about the hazardous effect of firecrackers on the ecosystem. Exuberant slogans on celebrating Eco friendly Green Diwali exhibited the concern to beautify this festival with environment-friendly things.
On this occasion Punjabi singer Sunanda Sharma captivated the audience with her melodies numbers and also extended Diwali greetings to all residents of the Tricity. The event held today also witnessed gratifications of winners for 92.7 Big FM’s Diwali Special  “Ranacos Mascot City Derabassi - Deal Da Mamla”. MJ’s of Big Fm MJ Vishesh, MJ Megha, MJ Gurri, and MJ Amar who had earlier this week brought in special deals, for which listeners had to guess the best bargained prize and listener with the closest guessed price were then considered for a lucky draw for the final winner of each deal. The deals included LED TV, Washing Machine, Diamond Ring, Sound System, Vanity for bathroom, Hard Drives & a mega prize - a plot of 100 square yards by Ranacos Mascot City Derabassi.
Punjabi Singer Sunanda Sharma,  Regional Programming Head of Big Fm Sulakshna Bramta along with Yashveer Rana of Ranacos Mascot City Derabassi, the deal partner, announced the lucky winners on the occasion and gave away the prizes to the winners . Yashveer Rana said that we are happy to partner the initiative of Deal Da Mamla Hai as during festive season everyone wants to crack the best deal and what best if just by guessing, the deal becomes yours.
Speaking on the occasion, Regional Programming Head of Big Fm Sulakshna Bramta said that tricity residents belonging to all age groups, beginning from kids to the elderly should celebrate responsibly by causing least harm to the environment. We believe that change is an individual choice and as a group we need to stand together and bring forth that change. She also shared their initiative “Big Khushiyon Ki Diwali” under which teams of Big FM are visiting all the slum areas of the city and sharing the true spirit of the festival with children.

Posted by tricitynews online at 05:57 No comments: