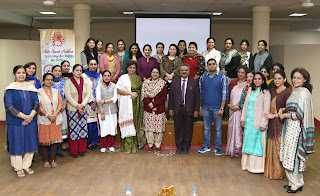 By Tricitynews Reporter
Chandigarh 02nd December:- The week-long Faculty Development Programme (FDP) at MCM DAV College for Women, organized under the aegis of Rashtriya Ucchatar Shiksha Abhiyaan (RUSA), culminated here today. The theme of the FDP was- 'ICT: New Dimensions in Research and Higher Education'.
During the valedictory session,  Dr.Dalip Kumar, ASPD-RUSA and Head, Biotechnology Department,  PGGCG-42, apprised the faculty of the role and relevance of RUSA in higher education. He also informed that the focus of RUSA is on enhancing digital literacy and hoped that educational institutions reinforce it. Dr. Amit Lal, NIT, Jalandhar conducted 4 highly informative sessions on SPSS. MCM RUSA Coordinator Neena Sharma appreciated the active participation of the faculty in the programme and thanked State Higher Education Department for funding the upgradation of faculty.


MCM Principal Dr. Nisha Bhargava reiterated that the gigantic change in the education scenario necessitates continuous upgradation and enhancement of the skills of the faculty. She expressed appreciation for the impetus given to quality in higher education by RUSA.
Posted by tricitynews online at 04:27 No comments: 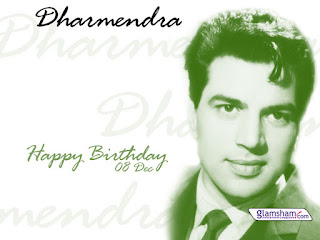 By Tricitynews Reporter
Chandigarh 02nd December:- In 1958, a dashing young man from Punjab queued up in Mumbai for a talent hunt. Amidst the host of aspiring faces, his effortless flamboyance was unmatchable. Producer Arjun Hingorani spotted the talent and thus began the journey of the evergreen, Dharmendra. Zee Classic, with its brand promise of Who Zamana Kare Deewana, celebrates the legend’s 81st birthday with a week-long festival titled ‘Dashing Dharmendra’, from 5th to 9th December, Monday to Friday every day at 10 AM.
The festival kicks off with super hit action drama ‘Ram Balram’ on 5th December also starring Amitabh Bachchan. Directed by Vijay Anand, this film has Dharmendra playing a smuggler stirring up the world of black market which brings him to a collision with his long lost brother, a cop. Next in line follows ‘Katilon Ke Katil’ on 6th December starring Dharmendra with Rishi Kapoor. Based on a mother’s equation with her two sons, this film was directed and produced by ArjunHingorani who was fixated with casting Dharmendra in all his ventures.
The line-up continues with ‘Raaj Tilak’ on 7th December. An ensemble cast including Sunil Dutt, Raj Kumar, Pran, Hema Malini and Kamaal Hassan, Dharmendra played a royal heir fighting for his throne in this epic period drama. ‘Sultanat’, starring father-son duo Dharmendra and Sunny Deol airs next on 8th December. Their first outing together, Dharmendra is pitted against his own son here, both plotting to kill each other for revenge. Concluding the festival on 9th December airs ‘Zalzala’, an action drama. Here, Dharmendra plays a commoner in search of a hidden treasure also hunted by a host of villains.


Once referred to as the most good looking man on showbiz, Dharmendra has portrayed every conceivable role in every imaginable genre in his career spanning over 5 decades. Such was the inimitable charm of this gentleman. An ardent fan of his, actress Jaya Bachchan once said “Dharmendra was God to me and he still is.”Zee Classic wishes him a wonderful Birthday and a long life ahead.
Posted by tricitynews online at 04:20 No comments:

GMADA Will Provide Rs. 50 Crore Every Year to MC for Upkeep Work 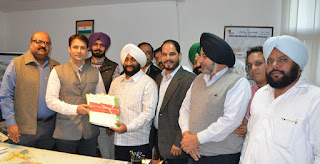 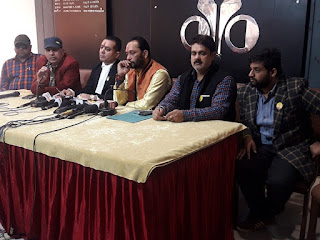 By Tricitynews Reporter
Chandigarh 02nd December:- The legal cell of the Hindu organisation, Shiv Sena Hindustan moved an application today in the Punjab and Haryana High Court requesting to be included as a respondent in the writ petition filed by Simranjit Singh Mannn for organising  Sarbat Khalsa on December 8. Expressing its strong resentment against it, the cell will also file its detailed objections in the court tomorrow.
While addressing the media-persons here today, the national President of Shiv Sena Hindustan, Pawan Gupta said that our state President, Legal Cell, Amit Ghai and President of the State Trader cell, Navneet Kapoor have appealed in the High Court that congregation like Sarbat Khalsa should not be allowed which promotes anti-social elements and also support terrorism in Punjab. This will disrupt law and order situation in the state and will create unrest.
He said that during the last gathering of Sarbat Khalsa near Amritsar, slogans in the support of Khalistan were raised which challenge the security of Hindus living in the large number in the state. He said that the organization strongly condemn the movement and would put efforts in curbing it completely.
Apart from this, Pawan Gupta informed that the organization’s political wing Hindustan Shakti Sena will fight Assembly elections on 30 seats in Punjab and will introduce its candidates on 100 seats in Uttar Pradesh. The election Commission has allotted coconut as our election symbol.

Posted by tricitynews online at 04:02 No comments:

By Tricitynews Reporter
Chandigarh 02nd December:- The general election to the Municipal Corporation of Chandigarh has been scheduled to be held on 18.12.2016.The political parties, contesting candidates and the press media are participating in the election actively. For the same The Election Commission of India has imposed restrictions on publication of result of exit poll and opinion poll at the time of elections to Lok Sabha and State Assemblies.
Therefore, in exercise of the powers conferred by S. K. Srivastava, State Election Commissioner of U.T Chandigarh  under article 243K and 243ZA of the Constitution of India read with the provisions of section 10 of The Panjab Municipal Corporation Act, 1976 as extended to the Union Territory, Chandigarh, by The Punjab Municipal Corporation law (Extension to Chandigarh) Act, 1994,  has hereby directed:-
The poll for the aforesaid general election will be conducted on 18.12.2016 during the hours of 8.00 A.M. and 5.00 P.M. (till the last voter in queue has casted his or her vote). It is hereby notified that the period between 8.00 A.M. and 5.00 P.M. as aforesaid on 18.12.2016 shall be the period during which conducting any exit poll and publishing or publicizing by means of the print or electronic media or dissemination in any other manner whatsoever, the result of any exit poll in connection with the said general election, shall be prohibited.
It is further clarified that displaying any election matter including results of any opinion poll or any other poll survey, in any electronic media, would also be prohibited during the period of 48 hours ending with the hours fixed for conclusion of poll for the aforesaid general election.
Posted by tricitynews online at 03:53 No comments: