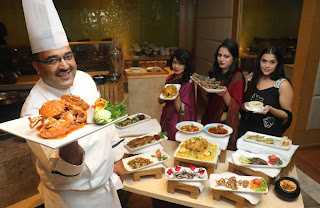 By Tricitynews Reporter
Chandigarh 21st January:- Already known for its food and beverages, Taj Chandigarh, one of the leading five star hotels in the city, now takes things a notch higher with Chef Ranvijay joining them with 18 years of experience in the arena.
Surinder Singh, GM, Taj Chandigarh, rightly believes that the ‘food and beverages department of any hotel, plays a crucial part in its success’. He goes on to say that this fact is ‘even more heightened in Punjab since here the culinary expertise is given preference over all other aspects of dinning. If the food is not good, no matter how luxurious your property, you will end up losing guests.’ Keeping this aspect in mind, he is confident that Chef Ranvijay will be playing an important role in the hotel in the years to come.
Chef Ranvijay who has also worked in several ITC and Taj hotels, apart from several prominent five stars of Delhi, has a varied area of expertise. While there is no denying that north Indian food is his forte, Italian and Lebanese favor high on his personal list. Interestingly, the Chef is very well known for his expertise in the oriental section. Right from Chinese, Japanese, Thai, Vietnamese, Mongolian, Burmese to even Korean, he has mastered these cuisines.
Chef Ranvijay has his sleeves rolled up and promises that the city will see some great meals being churned out from his kitchens. When asked if he is a strict Chef, he smiles and lets the question pass. However, he did say that his norms in hygiene and product quality are very stringent and he will not allow a slack here at any cost. ‘With the right product’ the Chef insists, ‘half the battle is won.’
The Chef believes that when it comes to food, presentation is crucial. Having gained special expertise in this area, he says that while he enjoys cooking all types of food, French and desserts, are favoured highly by him in the plating section. These allow him to play a lot with the food, which is also the reason why he enjoys ala-carte dishes better than the buffet layout.
The tides of change have brought in Chef Ranvijay to the kitchens of Taj Chandigarh as Executive chef. With nearly two decades of experience under his belt, Chef has a lot to offer to city beautiful and its culinary arena.
Posted by tricitynews online at 04:33 No comments: 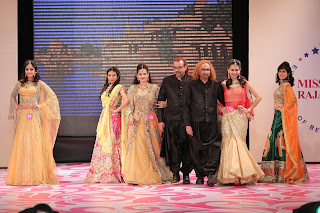 By Tricitynews Reporter
Chandigarh 21st January:- Celebrating fashion of Winter Weddings with Designers Ajay Sinha &  Buzy from BUZJAY FASHION STUDIO Looking chic while you remain warm in winters can get difficult, crucial and tricky. You are not fascinated with the thought of wrapping around layers of warm clothes to keep you warm as that’s a big style blunder. At the same time you wish to flaunt the best in style and be cynosure in a winter wedding. Designers Ajay Sinha &amp; Buzy from Buzjay Fashion Studio are all set to pull you out from this dilemma as they have some innovative trends, tricks and tips to share with you to make you look glamorous and hot for a winter wedding.
This winter fashion is all about stylish manifestation, bright shades, peach, pink, pale blue, rose ink mint, peach and orange.
Layering your beautiful dress with sweaters or coats is not a smart choice so team up your stunning ensembles with beautiful jackets in silk and velvet with warm padding, jackets in vivid Colours with subtle or heavy embellishment matching with colour of your dress will make a good choice.
If you are contemplating wearing western attire than you could go for printed jackets or jackets that are studded with stones and Swarovski.
You can go for thermal wear, legging and camisole beneath your dress if you are wearing saari or lehanga.
You can wear ethnic wear such as saari, anarkali but make sure you wear full sleeves; you can go for beautifully embroidered sleeves and necks. Blouse in velvet or warm fabric with embellishment will keep you fashionably ahead and warm. Cholis look very ethnic and stunning as they keep you warm too. Another good choice for you would be to go for waist length jackets in place of usual blouse. You can opt for same colour or go for colour contrast, fancy and stylish jacket with elaborate or subtle detailing. Pair it with Indian wear and pin a lovely broach to your jacket to tie your ensemble.

Posted by tricitynews online at 04:28 No comments: 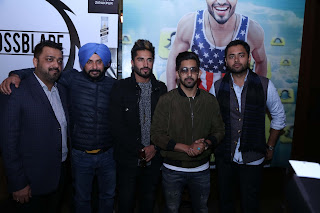 By Tricitynews Reporter
Chandigarh 21st January:- Get ready for a never seen before concept, the first music festival of north India and world’s biggest Punjabi music festival ‘Hungama Crossblade’ the Larger than Life music festival. In association with Seagram's Royal Stag Barrel Select Mega Music Cds and Powered by Homeland Group, this festival is the celebration of musical heritage in modern as well as the traditional way.
This entire musical extravaganza is a unique one and it’s for the first time ever that the audiences will be able to witness such a huge musical affair. Hungama Crossblade, originally an 8 editions old musical tour, now aims to bring alive the spirit of Punjabi music and culture through a combination of music genres across 2 days in the forthcoming edition, with 40+ celebrity singers performing in this particular festival.
The whole festival surely promises to be a larger than life experience, and rightly so as the audiences will witness breathtaking performances by the best artists in the industry. The attendees can try their Bhangra moves to the rhythms of the no.1 Punjabi heartthrob, singer and Bollywood star Diljit Dosanjh and groove along to the beats of the most loved DJ in India, also known as the Bass King - Nucleya, who will set everybody’s heart racing with his power packed performance.
Apart from these two major attractions, more than 40 celebrity singers from the industry, including Jassie Gill, Babbal Rai,Harrdy Sandhu, Nooran Sisters, Gurnaza,  Milind Gaba, Zora Randhawa, Navv Inder, BPraak & Jaani, Kulwinder Billa, Ammy Virk, Mankirat Aulakh, Amrit Maan, Sunanda Sharma, Jenny Johal, Himanshi Khurana, Resham Singh Anmol, would be adding melody to the event through their mesmerizing voices. Not only this to add that hip and hopness to this musical night famous bands like Runway Project, Aayat Fusion Band and NISSI the Fusion Band will be part of the performance sequence.
Jassie Gill who also unveiled his latest track, ‘Snapchat’ said that Hungama Crossblade is actually one of the biggest Punjabi musical fest that is going to happen and he is very thankful to make him a part of this festival. He would also convey all his good wishes to the organizers of Crossblade and hoping that such larger than life events keep happening to keep entertaining our fans.
Babbal Rai on the same added that this is indeed a very big music festival taking place and he is really very excited to perform on this very festival, it’s the first time in that almost the entire industry will be performing on one platform, it’s definitely a memorable and a warm moment for all of us.
Satvinder Singh Kohli, Director Speed Records who was also present on the same said that Speed Records and EYP Creations have always tried to do something different. This is the eighth edition of Crossblade and this is definitely the largest and grandest one till now. This would not have been possible without all our 40+ celebrities including our star attractions, Diljit Dosanjh and Nucleya who have actually raised the bars by performing on the festival. We have really worked hard for this entertaining festival will be the impetuous for us to hold such more larger than life festivals in Punjab, for Punjab by Punjab.
Just a countable number of days are left in this larger than life musical fest which is going to be held on 28th and 29th of January from 2pm to 10pm, in Chimney Heights, Mohali. The audiences seem to be pretty excited for the same and have already been giving an overwhelming response for Hungama Crossblade 2017. 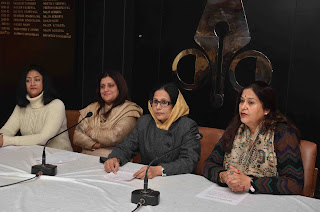 By Tricitynews Reporter
Chandigarh 21st January:- As a registered party since 2015, we have our agenda to get power share through contesting election by women party. It is a party by the women, for the women and of the women. We thought to form a party and to contest election as living being for the sign of awareness among the women after 70 year of Independence. This was stated by the Naseem Bano, he National President of the AIWUP.
While interacting with media Naseem Bano said that in short we formed this party for the justified cause of women against the political domination and unjustified erosion of power for the women kind. Our constitution has given as equal rights, opportunity and equality before law but the same is not happening. She further said that he same old fashioned British Ruled Laws are implemented on us without change in the system. We have to fight for our survival, right to marry, choose spouse, right to procreation, child birth etc., we forget about good education for all, only a few are privileged to get their rights, in every spheres of life women are neglected, oppressed, tortured, ignored and abandoned as burden, relieved as burden by the parent as if she is no human being and her wishes are not countable. As if we forget our basic rights, as human being and 50% countable population we have the right to share power in democratic institution, in elections, in Vidhan Sabha or Parliament and in decision making institutions, in all spheres of life, all stages of political system to share power at whatever stage it may from the choices childbirth to choosing groom to sharing power in development in villages, in cities, in Metropolitan cities, our cause is diluted in this crowd. We see the change are not countable by our time machine, from the Magna Carta days of 12th Century to 21st Century we have just moved one pace, the base right to education which are now considered as the biggest achievements for the country.
When we did not our righta we were satisfied with our destiny and blaming God, But the United Nation’s Declaration 1995, UN Women and the communication systems, information technology has made us more aware than the education. Thus we consider our new magna carta, the UN Declaration of 1995 on women’s rights to share power in all decision making matters and all spheres of life.
Our party thoughts are based on UN DECLARATION 1995 ON WOMEN POWER SHARE, now we are on the move to move mountain, to fight election under banner of ALL INDIA WOMEN UNITED PARTY, we seek your support and co-operation for betterment in the society, equal opportunity for all in our democratic society and for making a better India for the coming generations.
Posted by tricitynews online at 04:04 No comments: