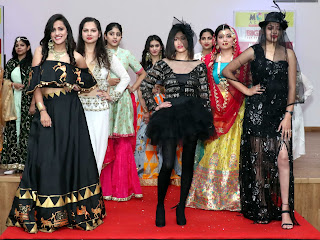 By Tricitynews
Chandigarh 20th Dec:- For audience, it was a treat and feast to watch a musical odyssey filled with folk dances from Punjab and Himachal during an annual day celebrations of Morph Academy at IMA Complex , Sector 35 Chandigarh on Friday.
The musical journey started with western fashion show where students displayed various western outfits for all seasons. Then came the turns of Punjabi folk music followed by ramp walk by students in traditional Punjabi outfits.
The gidda performances and bhangra by students forced audience to stand up on their feet and make revellery. The stage for a moment turned into a gala display of Punjab’s rich and colourful culture with students dancing to peppy Punjabi songs.
Then it was turn to go on hills ride when a team of students set the stage on fire with Himachali nati.
Around 150 students of academy took part in the show. Later CEO of Academy, Ajay Sharma distributed academic and endowment awards to students.
Meanwhile Morph Academy is one of leading academy of region in animation, graphics, web, photography.
Posted by tricitynews online at 05:44 No comments: 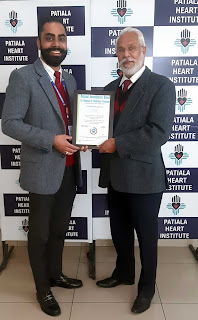 By Tricitynews
Chandigarh 20th Dec:- Patiala Heart Institute gets NABH Accreditation Patiala Heart Institute (PHI) here has been accredited by the National Accreditation Board of Hospitals & Health Care Providers (NABH), thus making it one of the few hospitals in city to have achieved this milestone.
NABH is a constituent board of Quality Council of India set up in cooperation with the Ministry of Health and Family Welfare, Government of India, and the Indian Health Industry to ensure that hospitals implement stringent quality measures, involving patient rights and education, patient care and safety, management of medication, hospital infection control and continuous quality improvement.
Dilshad Singh Sidhu, COO of PHI said that our institute is committed to quality care and ensuring patient safety.It is a matter of pride and honour for us to get this accreditation. We will strive hard to maintain the standards and continue to improve services in future, he maintained.
Meanwhile PHI has recently bagged the prestigious ‘Kayakalp Award’ for maintaining cleanliness within the hospital premises and showing dedication towards the mission of 'Swachh Bharat Abhiyan'. PHI was the only private hospital from Punjab to win the Kayakalp Award till date. Only ten private hospitals across India were shortlisted for the award after a rigorous assessment process.
To facilitate process of patient centric evidence based care, PHI has also unveiled multidisciplinary ‘Heart Team Approach’’ concept recently.
Posted by tricitynews online at 05:39 No comments: