By Tricitynews
Chandigarh 03rd August:- Jet Airways, India’s premier full-service international airline, today introduced tri-weekly non-stop flight connecting Chandigarh, the capital of Haryana and Punjab, with Kolkata - the city of joy. In an industry first, the airline also introduced a daily,non-stop flight effective 01st September, 2018 between Chandigarh with Lucknow - the capital of Uttar Pradesh replacing its erstwhile one-stop connection via Delhi.
Jet Airways’ new services will promote business and economic activity in the region. The airline has increasingly been introducing services that cater to the growing demand for travel between emerging cities and metros, stimulating the growth of Small and Medium Enterprises, assisting corporate travel as well as guests who are visiting friends and relatives. Chandigarh has one of the highest per capita income in the country and a high travel propensity, having been rated amongst the "Wealthiest Towns" of India. Jet Airways currently operates daily flights connecting Chandigarh with Mumbai, Delhi, Hyderabad, Indore, Jaipur and Pune respectively and the airline’s latest service to Kolkata will link it with the commercial and financial hub of the East.
Raj Sivakumar, Sr. Vice-President, Worldwide Sales & Distribution, Jet Airways said that Air traffic from Chandigarh has grown in excess of 16 percent CAGR over the last three years. The burgeoning demand for air travel pan-India is seeing guests travelling to more than one destination, reinforcing our network model. He added that more and more guests prefer seamless connectivity with minimum stoppages, regardless of their point of origin. Our schedule has been meticulously planned to meet the expected surge in demand over the coming months. New flights connecting additional sectors are meant to offer our discerning guests choice, convenience and superior comfort. I am sure these new flights will reinforce Jet Airways’ perception as the preferred airline and will boost trade and development in each of these cities.
Jet Airways flight 9W 158, on Monday, Wednesday and Friday, will depart from
Chandigarh at 13:45 hrs and arrive at Kolkata at 16:25 hrs. From Kolkata, he return flight 9W 157 will depart at 10:35 hrs and land at Chandigarh at 13:15 hrs (IST).
Likewise, Jet Airways flight 9W 3523, will depart from Chandigarh at 14:45 hrs and arrive at Lucknow at 16:40 hrs. From Lucknow, flight 9W3524 will depart at 13:50 hrs and land at Chandigarh at 15:40 hrs.

Posted by tricitynews online at 06:02 No comments: 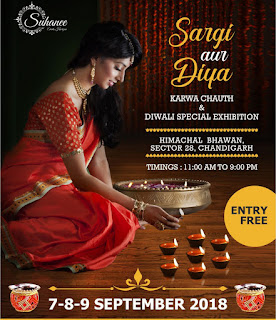 By Tricitynews
Chandigarh 03rd September:- After the massive success of ‘Veer Di Veera’ exhibition, Mitali Munjal is back to ace her expertise with a three-day Karwachauth & Diwali special exhibition which will take place from 7-9 September at Himachal Bhawan, Sector-28, Chandigarh. The theme of the exhibition traces its roots from ‘Sargi’ which is symbolic of Karwa Chauth and ‘Diya’ which delineates the festival of lights, Diwali.
Mitali, Organizer at Suhanee Events Horizon informed that Sargi Aur Diya exhibition will prove to be a one-stop destination for all the Karwachauth and Diwali needs for everyone alike. From home décor, accessories, clothing, footwear, to gift items for your special ones, this exhibition has it all.
This opulent three-day exhibition attracts exhibitors from across the country, which will provide the visitors with a delightful shopping experience. So, mark your calendar and let the festivity begin.

Posted by tricitynews online at 05:52 No comments: