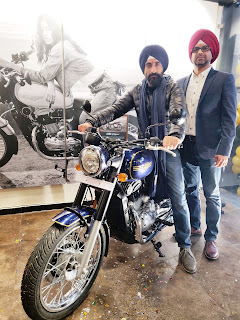 By Tricitynews
Chandigarh 07th Feb, 2019:- Classic Legends Pvt. Ltd. is proud to announcethe launch of its Jawa Motorcycles dealership in Chandigarh today. The newly opened showroom adds to the existing network of Jawa dealerships in Jallandhar and Ludhiana and will be followed by a new dealership in Amritsar. The dealership in Chandigarh is opened at the Industrial Area Phase-1, Tanishk Automobiles, Plot no. 9, Industrial Area Phase-1, Chandigarh- 160002 The brand is aggressively moving ahead with its target of opening 100+ dealerships and the launch of new outlets in Chandigarh and Amritsar will take the total count to 32 dealerships across India.
Anupam Thareja, Co-founder, Classic Legends Pvt Ltd. and Founder and Managing Partner, Phi Capital and Ashish Singh Joshi, Chief Executive Officer, Classic Legends Pvt. Ltdinaugurated the showroom, amidst a throng of Jawa aficionados and customers.
Speaking at the occasion, Anupam Thareja said that this is the land of a rich & vibrant culture and deep-rooted tradition. That makes it apt for us to mark the homecoming of a classic brand in this wonderful city that has kept the spirit of this legend alive through its Jawa collectors, riders, clubs and countless fans. As nostalgia comes full circle, we are proud to announce the opening of our dealership in Chandigarh as an ode to this spirit of bonhomie and vibrancy, amongst the heritage Jawa motorcycles that have gathered here to welcome the new Jawa and Jawa forty two to the streets of Chandigarh. Given the love and affection we have received from Jawa lovers, it is our duty to put in industry first practices to create an experience that transcends the way premium motorcycles are sold in the country. We are working to build a superlative experience for the customers in terms of brand as well as sales enablement as we gear up for deliveries starting March. As we expand our network in the region, we urge everyone to walk into the new dealerships close to them to experience Jawa motorcycles.
Ashish Joshi, further added that Chandigarh happens to be home to connoisseurs of classic & timeless styles and we are delighted to offer our modern classics to the motorcycling enthusiasts here.With over 100 dealerships set to be operational within this quarter of 2019, in true start-up fashion, we will achieve nationwide coverage in a span of a few months since launch. We pride ourselves at this speed and scale of achievement, which is driven and inspired by overwhelming customer response. At Jawa, every dealer is a strong pillar of our growth and has our complete backing, now and always. We are committed to provide our customers with the best of the sales, service and spares ecosystem with their support and it was their confidence in us that allowed us to build the Jawa showrooms the way you see them today. We are excited that we have already taken the right step forward in building this experience by announcing an industry-first Exchange Program and the largest number of financial tie ups.
The Jawa dealership is a place to make connections with yourself, with like-minded people and with the motorcycles. Its design philosophy is rooted in authenticity, and the ability to bridge the past and the present through its stories and the motorcycles. It is a biker café ambience which tells the tale of the legend that Jawa is.
The Jawa and Jawa forty two break cover as the brand’s new torchbearers, bringing back the classic appeal of Jawa with a retro-cool twist. These modern machines have the authentic Jawa character that balances performance, capability and quality. An all-new 293cc, liquid cooled, single cylinder, DOHC engine nestled within a double cradle chassis is tuned to bring out the superlative handling and class leading stability, making the new Jawa a true modern classic.
The Jawa and Jawa forty two are priced at INR 1,65,000/- and INR 1,56,000/- respectively (ex-showroom, Chandigarh) the Dual Channel ABS variants will be priced at Rs.1,73,942/- & Rs. 1,64,942/- respectively. Bookings are open at the showrooms.

Posted by tricitynews online at 04:59 No comments: 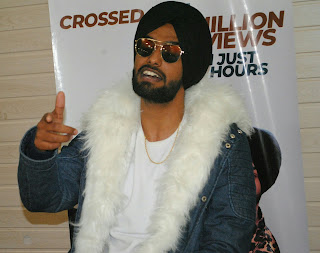 By Tricitynews
Chandigarh 07th Feb, 2019:- Ravneet Singh, a Punjabi singer, composer and a multi-gifted artist, hailing from Kala Sanghian (Kapurthala), is getting huge response on Youtube for his latest song “Laung Gawacha”. He was in City today to talk about his journey as a singer.
Talking to the media at Chandigarh Press Club, 23-year old  Ravneet said that he wanted to be a singer, as singing is his passion, but his parents wanted him to first complete his studies. Therefore, he first completed BTech in Civil Engineering and then pursued his career in music. ‘Laung Gawacha’ has recently got over 5 million views on Youtube. The young singer has given 11 songs so far.
Ravneet said that ever since he first sang in school, he knew this is what he wants to pursue in his life. His parents then brought him a harmonium. He would practice with his ustaad ji. His family was not keen in pursuing music as a career since they knew that the industry is vast and it would be a tough journey ahead. However, they still supported his decision.
Passionate about singing, writing and composing music, Ravneet started taking part in various Youth Festivals. Through his music Ravneet covered various genres such as classical vocal, folk and has even tried the art of Ghazal. Some of Ravneet’s favorite singers include Babu Mann, Gurdas Mann, Guru Randhawa and Gulam Ali Khan.
Laung Gawacha, a T-Series production, is a product of music director Vee Music, who has given big hits like ‘Lahore’ and ‘High Rated Gabru’.
Even though he does not come from a musical background, still Ravneet developed interest in the art of vocal music at a very tender age and was mesmerized by Hindustani Classical Music. He started to learn music during his schooling as a hobby and built an interest so deep that he knew nothing could stop him from making his career in the field.
Starting to perform at School events and competition, Ravneet slowly gained a fan following amongst his friends. Ravneet grew up listening to Indian Classical by Ustad Bade Gulam Ali Khan Saab, Ustad Amir Khan Saab and Bharat Ratan Bhimsen Joshi. Ravneet takes his inspiration from Legendary artists Babbu Maan and Gurdas Maan.
Brought up in a strict Punjabi family, he resides with his father - Gurdeep Singh, a Government employ, mother - Mrs Gurinder Kaur, a homemaker, and a younger sister. Ravneet made his debut in the Punjabi Industry with the track "Jattan Wale Ganne", followed by the track "College" and " Cool Lip". With the release of the track "I Like You" and "Love Story", Ravneet touched many hearts. However, the rise came with the track "Reasons" and "Teeli Teeli" which is bound to move you and build a fire deep within.

Posted by tricitynews online at 04:53 No comments:

Posted by tricitynews online at 04:44 No comments: