By Tricitynews Reporter
Chandigarh 20th July:- Infosys has been identified as a Leader in Internet of Things (IoT) services in the overall market segment in NelsonHall’s Vendor Evaluation & Assessment Tool (NEAT) report. Infosys was recognized for its ability to meet future client requirements as well as delivering immediate benefits to IoT services clients.
NEAT evaluated 23 vendors across the two parameters of ‘ability to deliver immediate benefits’ and ‘ability to meet future client requirements’.
According to the report, with Infosys’ IoT portfolio at the intersection of three core capabilities–IT services, engineering services and analytics, the company helps global clients in their IoT journeys with a wide range of services including consulting, embedded systems, hardware design, prototyping, system integration and managed services.
Posted by tricitynews online at 06:28 No comments: 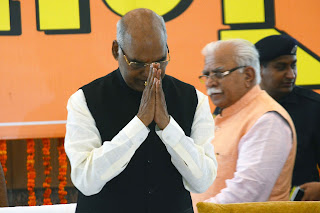 By Tricitynews Reporter
Chandigarh 20th July:- Ram Nath Kovind, the NDA candidate, was on Thursday elected as India’s 14th President receiving an overwhelming majority of votes from the country’s lawmakers.
Ram Nath Kovind defeated opposition’s Meira Kumar, a former Lok Sabha speaker, garnering more than 65 per cent of the votes in the Electoral College, the Returning Officer for the poll announced on Thursday.
71 Year old Ram Nath Kovind is Second Dalit to hold the top constitutional position, received 2930 votes with a value of 702044, the returning officer, Anoop Mishra, said.
Kovind will be the first BJP member to be elected president. Ms. Kumar, also a Dalit, polled in 1844 votes with a value of 367314.
Electoral College comprises of Members of Parliament and members of legislative assemblies of all states.
A total of 4,896 voters  4,120 MLAs and 776 elected MPs — were eligible to cast their ballot. MLCs of states with legislative council are not part of the electoral college.
While the value of an MLA’s vote depends on the population of his or her state, the value of an MP’s vote remains the same at 708.
The polling was marked by cross-voting in various states where many opposition members favoured Mr. Kovind.
The Vice-Presidential election will be held on August 5.
While BJP has nominated a former party president, Venkaiah Naidu, the opposition has fielded former West Bengal governor Gopal Krishna Gandhi.
Posted by tricitynews online at 06:24 No comments:

My Hardwork Paying to Me Sen Mahajan 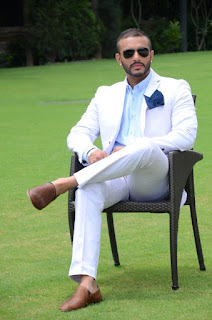 By Tricitynews Reporter
Chandigarh 20th July:- Hardwork always pays and it also well paid to me for my deeds. My father left me during childhood and my sisters brought up me. After father’s demise, I performed thirty days rituals at Gurudwara Nanaksar which has brought a tremendous change within me. I still remember, my mother sold her gold chain just to fulfill my mobile phone wish, further I purchased an air ticket. Now, every Diwali, I gift her gold chain.” This was narrated by England and Canada based Sen Mahajan, who is acting as villain in bollywood movie “Eik Haseena thee, Eik Diwana thaa” who briefing a press conference today at a hotel in Chandigarh. The film is director by Sunil Darshan and was released recently.
While briefing a press conference in Chandigarh, Sen Mahajan revealed that he is living in Canada and England from last 13 years and served British Army for eight years before he seek early retirement. After retirement, he opened a restaurant and also starts catering Bollywood. He said, Director Sunil Darshan spot him and by the dint of talent offer him a role. He added that but due to professional commitment, he wants to expand his venture and hardly gave any thought to this offer. But all of sudden after forty days, he again called him and asked him ready for the shooting. He went to set and surprised to see the everything was in place before he gets into action.
Sen Mahajan said since he spent lot of time in British Army, he was engaged in training and right implementation never been a problem to him. During the shoot, he realized that he again joined army to perform disciplinary.
During the interaction, he said, Director Sunil Darshan has also launched his son Shiv Darshan. Other who acted in the film includes Natash Fernandes, Upen Patel and Rumi Khan. Mahajan acted as villain in the film which was well appreciated. He said, he has two other projects lined up in coming time.
Posted by tricitynews online at 06:19 No comments: 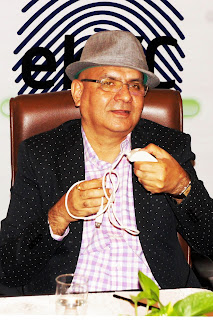 Photo By Parveen Kumar
By Tricitynews Reporter
Chandigarh 20th July:- Videocon Telecom today announced its entry into E-KYC business to provide Aadhaar based digitalisation. eKYC is a government approved paperless, verification method for fulfilling KYC requirements of any organization. The service shall be either authentication or verification in nature as per requirements of any organization.
Videocon Telecom has obtained both the ASA and AUA licenses for the Aadhaar based validation. The Company will act as the link for an individual’s registration process with UIDAI and take one through the registration process without any hassles. Videocon Telecom would assist in providing the services which will cover business process re-engineering, secure environment and automated process flow thereby creating value for each user.
So far, most companies that are registered with UIDAI are using eKYC for selective and sector centric purposes. Videocon’s eKYC vertical aims to digitise all key sectors namely Finance, Insurance, Hospitality, Education etc. It will also help government organizations to have Aadhaar based attendance at highly sensitive places, curb attendance frauds in organizations at remote locations, and will also ensure that schemes like mid day meals and other subsidies are going to the right beneficiaries. The company, backed by its rich experience in Telecom and IT services, an in-house DATA Centre, strong Technology partners will provide personalized solutions to each sector.
Announcing the company’s foray into the E-KYC business Arvind Bali, CEO, Videocon Telecom said that digitising India is the only sure-shot way to reach the benefit of growth to India’s masses and that will create the multiplier to ensure the target 8 to 10% sustained GDP growth. Digital India is certainly the most appropriate call for transforming India into a vibrant and strong global economy. We believe that Digital India has the potential to become one of the most meaningful reforms for Indian businesses in recent history.

Posted by tricitynews online at 06:10 No comments: 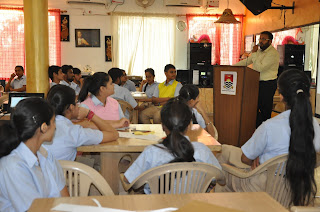 By Tricitynews Reporter
Chandigarh 20th July:-Chiraag Mehta who is Associate Dean at Indian School of Business & Finance(ISBF) & is a Masters in Economics from Londom School of Economics(LSE), conducted an interesting workshop for students of The British School, Sec 44, Chandigarh- - 'Playnomics'.  The session enabled students to understand basic concepts of Economics and Management through role-play games & activities.
Mona Sethi, Principal said that 11th and 12th grade students, from all streams attended the Workshop. Every student participant got an opportunity to earn a certificate of participation from University of London and ISBF which adds on to their profile as well.
Chiraag Mehta said that playnomics is an interactive teaching methodology. As opposed to traditional classroom & text book teaching, Playnomics involve students to actively participate in the learning process that is both enjoyable and relates to the real world scenarios.

Posted by tricitynews online at 06:05 No comments:

What are Girl’s Key Expectations While Choosing A Partner: A Bharat Matrimony Survey Reveals


Launching the matchmaking survey results, Kaushik Tiwari, Head Marketing at Matrimony.com said that these surveys are part of BharatMatrimony’s endeavour to study consumer insights and continuously improve our understanding of customer expectations, to stay relevant.
Posted by tricitynews online at 05:59 No comments:

Resham Anmol Release His New Single Track “Take Me Away” 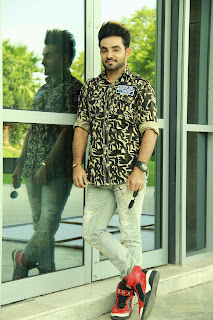 Photo By Parveen Kumar
By Tricitynews Reporter
Chandigarh 20th July:- Today everything demands newness. Even if it is a traditional wedding, the music should be as fresh as possible. And of course our Punjabi Singers are quite famous in experimenting newness in their music. Every day the singers are trying their level best to bring out something good in his/her songs so that the audience likes their songs. With this thought process and effort, our singer Resham Anmol has also come up with some newness in his upcoming song, “Take Me Away”, which is being labelled under the banner of T-Series. The songs were released here in the city and on this occasion, Resham Anmol interacted with the media also.
The music of the song has been given by MRV, and the video of the same has been done by the famous video director only jashan. The lyrics of the song have been penned down by Rhythm.
Resham Anmol, belongs to a Village called Natakpur, Ambala. His first album, “The Beginning with YoYo Honey”, was released in the year 2009, which was also labelled by T-Series. Has done music with Honey Singh and Raftar. Resham has learnt music from Dev Tharike Wale and Kuldeep Manak. Govt. of Haryana has awarded him as a best singer in the year 2011 and has been a Gold Medalist for continuous three years while he was studying in the Kurukshetra University. Resham loves farming and the moment he gets some time he rush to his farm for the same. He likes to perform live. His ideals are Gurdas Maan and Babbu Maan.
Resham Anmol on this occasion said that punjab is all about flavors and experiment is one thing which he is always open to. Recording this song wasn’t really tough for him as, Music is reaching its heights these days and the audience loves to listen to good songs. He really hope that the audience would love his this song also.
Posted by tricitynews online at 05:54 No comments: 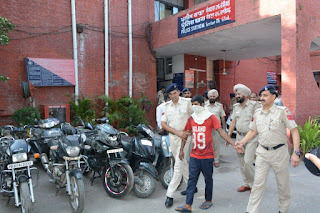 By Tricitynews Reporter
Chandigarh 20th July:- Chandigarh Police achieved the major success with the arrest of auto lifter namely Appu @ Anbhu resident of Sec-21, Chandigarh.
Giving information about the accused auto lifter, DSP- East said that after getting secret information regarding the above said accused a team of police station sector 26 Chandigarh laid a trap on the dividing road sector 28 near pumping station Chandigarh under the close supervision of Insp. Jaspal Singh Bhullar SHO PS-26 Chandigarh and apprehended one person Appu @ Anbhu, while he was driving a M/Cycle No. CH-01-AE-1509. On questioning he admitted that he stole the said vehicle from sec 27 Chandigarh. Later on, further questioning he disclosed about the theft of one more m/cycle CH 01 AD 0903. He was again arrested in case FIR No. 116/17 U/s 379 IPC. Thereafter, he was produced in the Hon’ble court of Barjinder Pal Singh ACJM UT Chandigarh and obtained 2 days police remand.


DSP said that during police remand 15 more two wheelers which were stolen by him from different parts of the city recovered at his instance from the different parking places. During interrogation, he disclosed that he use to stole vehicles after taking liquor and roam in the city. When it appears to him that the vehicle is having shortage of fuel. He parked the same in the parking in such a way that no one can reach and traced the vehicle. He never sold any vehicle to anyone. He just stole the vehicle for joy ridding.
Posted by tricitynews online at 05:48 No comments: