Posted by tricitynews online at 05:49 No comments: 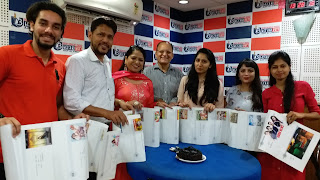 By Tricitynews
Chandigarh 03rd April, 2019:- Desh Bhagat Radio 107.8 FM (Aap ki Aawaaz) celebrated Chandigarh Bollywood Day’ with a cake cutting ceremony. Creative Head Desh Bhagat Radio Gagan Sasaan welcomed Anita Shabdeesh ( Film & Drama Artist) ,
Jasbir Dhillon (Production House), Vimal Trikha, Pragti Trikha ( Artist) said that this is the Fifth year in a row that Desh Bhagat Radio is celebrating this particular day. It's worth mentioning that 3rd April is an important day as on this day, Big Stars of Indian Film Industry Amitabh Bachan, Shahrukh Khan, Rani Mukerji, Preeti Zinta, Hema Malini & famous film Director Late. Yash Chopra along with a Big Unit of 200 persons were under one roof in Hotel Mountview for the shooting of a super hit film ‘Veerzara’. Darshan Aulakh’s production arranged the shooting at Chandigarh and around the city. The part of the above big cast was National Award winner child artist in the field of Acting, Pragati Trikha.
Hence this day signifies the importance of city beautiful in Bollywood. On this occasion Pragati Trikha said that it is from this day & date that Chandigarh started attracting bollywood stars & directors for shooting in the city beautiful Chandigarh. Consequent to that every Punjabi film Director is making a beeline for Chandigarh & the tricity to shoot their films here. 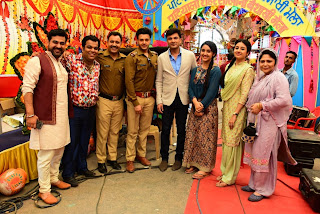 By Tricitynews
Chandigarh 03rd April, 2019:- Recently Vikas Khanna visited the sets of Patiala Babes to celebrate the occasion of Baisakhi. He played a cameo in the show where he was seen as the guest judge for the ultimate cook off between Babita and other renowned chef. This sequence is going to turn things around for Babita and Mini. His presence on the show will give Babita huge encouragement to pursue her dreams. Little that we know, his mother is an avid follower of the show and a huge fan.
While he was on the set, shooting his sequence with the team of Patiala Babes, he revealed that his mother is a very big fan of the show and does not miss any episode. His mother follows Patiala Babes religiously and absolutely loves Babita and Mini, she admires the bond mother and daughter share in the show. The show beautifully puts forth the need of such a strong bond between mother and daughter to stand together as one, against any difficulty in life.
Talking about the mother’s fan following, Vikas said that Patiala Babes is one show that my mother follows every day. She never misses single episode and makes everyone in the family watch it. She absolutely adores Mini and is highly appreciative of the bond that Babita shares with her daughter. The show is a great initiative that ascertains the transition towards a modern society.

Posted by tricitynews online at 05:35 No comments: 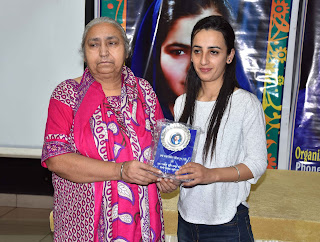 By Tricitynews
Democratic way of expressing the expression of the masses. This was stated by Simmi Marwaha Memorial Charitable Trust's Managing Trustee and poetess Rajendra Rosy in the Chandigarh Press Club during the 16th Young Journalist's Honour Day.
Those felicitated included photographer from print media, electronic media, and web media for their contribution in the field of journalism in addition to felicitation of a student from Mass Communication Correspondence department of Panjab University.
Rajendra Rosy said that in the way journalism has taken new techniques during the past, challenges have also increased for the youth. She said that every year on 3 April the contribution of young journalists is celebrated. The Trust has so far honored 60 journalists from across the country.
Kaushik Khan from Amar Ujala from Yamunanagar (Haryana), Jagpreet Sandhu from The Indian Express Chandigarh in English print media, Thakur Amandeep Singh of Daily Post in web media and this time topper of mass communication correspondence from Punjab University Chandigarh Kriti Thakur, were felicitated by Rajendra Rosy. 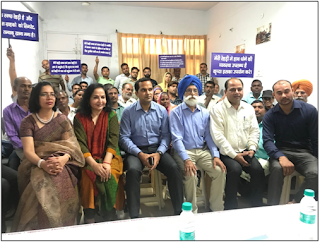 By Tricitynews
Chandigarh 03rd April, 2019:- Street vendors are an integral part any society and they give a sense of vibrancy to any city. They constitute an important segment at the bottom of the pyramid of the informal economy in cities. Street vending has a prominent place in the urban supply chain, and provides inexpensive and convenient access to goods and services to all segments of the population including the poor.
Street food vendors are a special group in this regard and are an integral and important role in urban food supply chain. Street food gives people affordable local foods at convenient locations. As per Government of India (GOI), there are, about 20 lacs street food vendors in India and around 3300 street food vendors in Chandigarh as per MCC.
GOI endeavour to support urban street vendors is reflected through National Urban Livelihoods Mission.  Chandigarh as a modern planned city can certainly take a lead here through training and skill development. A concept of ‘Safe Food Town’ needs to be developed & nurtured in tandem with declaration of Chandigarh as a Smart City.
To achieve this goal Department of Community Medicine and SPH, PGIMER, Chandigarh and Municipal Corporation of Chandigarh has jointly initiated a project entitled “Convergence of initiative of Women, Child and Social development agencies of Chandigarh for mainstreaming Street Vendors’ Welfare through integrated training enterprise of its Municipal Corporation with special focus on street food hygiene”, under the patronage of KK Yadav, Commissioner, Municipal Corporation, Chandigarh.
As a part of this project, 20 workshops will be held over a period of one year in Chandigarh. Through these workshops, training will be imparted to encourage and ensure that operation of Chandigarh Street vendors conform to- Byelaws of MCC, Food Safety and Standard Regulation 2011, Street vendors Act 2014, Child Labor Act, Swacchh Bharat Mission, Women empowerment & prevention of their exploitation. They will be empowered and enlightened about their rights and responsibilities.
In addition, three carts will be designed, manufactured and pilot tested to convert Chandigarh into a safe food town.
The Principal coordinator for this project is Dr Amarjeet Singh Professor, School of Public Health, PGIMER, Chandigarh. The project is co-developed by Saurabh Mishra, Additional Commissioner, Municipal Corporation, Chandigarh,Vivek Trivedi, Social Developmental officer, NULM, Municipal Corporation,  Chandigarh and Dr. Sonu Goel, Additional Professor, School of Public Health, PGIMER, Chandigarh.
The first capacity building & training workshop was held on 3rd April 2019 at City Livelihood Centre, Community Sewa Kendra, Sector 25, Chandigarh. A total of 40 registered street vendors attended the same. The vendors along with the training gotfree medical checkup by the doctors of Community Medicine, PGIMER, Chandigarh.
KK Yadav, Commissioner, Municipal Corporation, Chandigarh was the Chief Guest and he inaugurated the ‘Street Food Vendors’ Hygiene Kit’. Dr. Amarjeet Singh gave the inaugural address. This was followed by an interesting play on ‘food safety issues’ presented by students of NINE, PGIMER, Chandigarh. The play was organized under the guidance of Ms. Damanpreet Kaur (Tutor, NINE, PGIMER, Chandigarh).
Vivek Trivedi explained the bye-laws related to Protection Of Livelihood and Regulation of Street Vending.
Ravider from The Mask Theatre Group also staged a street play on this topic using Maddari-Jamoora motif.
Mrs Sangeeta Vardhan, Town Vending Committee Member, Chandigarh, explained the rights and responsibilities of street vendors. She interacted with the audience and addressed their grievances.
Harkit Singh, Punjab National Bank, Chandigarh came to increase awareness about financial literacy and various micro financing schemes as applicable among street food vendors
Dr. Geeta Mehra, faculty from MCM-DAV, Sector 36, Chandigarh gave demonstration on ‘foldscope’. She showed slides of microbes present in unhygienic food samples.
Sunil Arya faculty from AIHM, Sector 42, Chandigarh demonstrated the hygienic practices to be followed while food preparation and handling. He also highlighted the safety uniform features (like apron, head cover, gloves, etc) to be worn while preparing food.
Hindustan Unilever Limited supports the training of Street Food Vendors being jointly organized by Dept. of Community Medicine and School of Public PGI Chandigarh and Municipal Corporation Chandigarh as a part of its Corporate Social Responsibility initiative.
Dr. Nidhi Jaswal (SD, Community Medicine & SPH, PGIMER, Chandigarh) took a session on Laughter Yoga.

Posted by tricitynews online at 05:19 No comments: