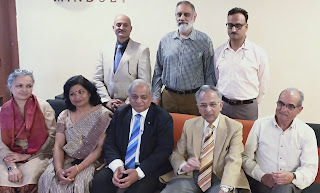 By Tricitynews
Chandigarh 28th Mar, 2019:- In last 21 years Rotary from India has sent more than 500 doctors to serve in 43 countries, and majority of them had been from Chandigarh and surrounding areas, informed Rajendra K. Saboo, former world president of Rotary International here today.
The concept of intercontinental medical mission was conceived by Rajendra K. Saboo and his wife Usha Saboo with first mission in 1998 to Uganda,  which tremendously raised the stature of India in the world as a ‘giver’ and not a ‘receiver’ when teams of super specialists shared their expertise and talent with the patients in Africa.
A team of 19 doctors from eight specialties along with Rotarian volunteers had recently returned from Madagascar, having attended to 3,500 patients in OPDs.
Some of the doctors from Chandigarh included eye surgeon Dr Nivedita Singh, dermatologist Dr Vanita Gupta, plastic surgeon, Dr V D Singh, ENT specialist Dr Raman Abrol, general surgeon Dr. N.S. Sandhu, gynecologist Dr. Nirlep Kaur, and orthopedician Dr. Ravjit Singh.
In the most trying situations, 163 eye, 73 general, 36 plastic, 34 ENT, 35 orthopedic, 8 gynecology, and 576 dental surgeries were done.  The dermatology department attended to 1250 patients and distributed free medicines to them.
Doctors shared their experience of working in difficult situations with dismal infrastructure facilities and lack of trained manpower, causing proliferation of congenital diseases, and many curable but neglected cases of skin diseases, bone infections, broken bones, hernia, goiter, clubfoot, burn injuries, etc.
Dr Vanita Gupta said that the country has no trained dermatologist, and skin diseases including fungus, scabies abounded.  Eye surgeon Dr. Nivedita found nonfunctional equipment in the operation theatre including auto-clave (sterilizer) and then used pressure cookers to manage the situation.
Dr VD Singh added that Indian doctors are most respected for their talent, their ability to work in difficult conditions for long hours and to innovate at the spur of the moment.
Praveen Goyal, District Governor 3080, who was a part of the team as a volunteer, said that it moved us to see smiles on the faces of the patient after surgery like the young 8-years old girl who was able to smile because of dental problem.
The team of doctors included from India included ophthalmologists, orthopedic surgeons, dentists, maxillofacial surgeons, gynecologists, general surgeons, ENT surgeons, plastic surgeons,  pathologists and anesthesiologists, who also trained local doctors in newer medical techniques.
R K Saboo said that each medical specialist not only conducted surgery, dispensed medicines, but more importantly, trained the local doctors and paramedics in the latest advances in various medical disciplines.
R K Saboo had also initiated medical missions in remote corners of India too in 2006 where similarly teams of doctors travelled to tribal areas and hard-to-reach locations to serve them.  So far 14 such medical missions in India have been carried out in different parts of Orissa, Madhya Pradesh, Rajasthan, J&K, Chhatisgarh, and Nagaland.
The next international medical mission with team of 17 doctors in going to Mongolia from 5th to 17th May 2019.

Posted by tricitynews online at 04:36 No comments: 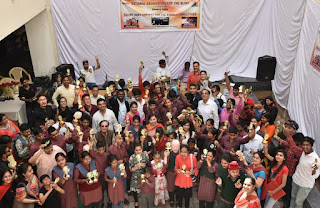 By Tricitynews
Chandigarh 28th Mar, 2019:- Amway India, the country’s largest FMCG direct selling company, organised a talent hunt competition in Chandigarh. The talent hunt involved various competitions amongst the visually impaired including a Chess competition, Braille reading, writing competition and a declamation contest on the topic of ‘Relevance of Braille in the age of technology’. The competitions were followed by a mesmerizing performance by Divine Eyes, which is a group of visually impaired music artists, from NAB Chandigarh.
The talent hunt received an overwhelming response with around 100 participants. Winners who ranked first in Braille reading and Braille writing were Kirandeep, Gaaganjyot, Sunaina, Afzal and Tulsi . Shubham was named as the winner of the chess competition. The debate competition was won by Kashish.
Speaking on the occasion, GS Cheema, Sr. Vice President –North & South, Amway India, said that at Amway, the main focus of our National Project for the visually impaired is to empower and enable the visually impaired individuals by providing them avenues for inclusive education. He shared further that the program has benefited more than 250,000 visually impaired individuals so far by providing various aids and equipment useful in education including braille books, audio/braille libraries and by providing them technology and IT training through computer centres across India. We believe that such events play an important role in building the foundation of learning for the visually impaired individuals and we are happy to provide them the much-needed encouragement by organizing such competitions.
Vinod Chadha, Hony. President, National Association for the Blind, Chandigarh & Punjab state branch said that it is heartening to see that the visually impaired are getting the opportunities of actively participating in the mainstream activities. I highly appreciate Amway’s initiative of organising these competitions with the visually impaired and encouraging them achieve their goals & compete with the world.
The ‘Talent Hunt’ was an extension of Amway’s continued celebrations of 210th birth anniversary of Louis Braille which the company celebrated with its 11 NGO partners across India for eleventh consecutive year by organizing myriad initiatives.

Posted by tricitynews online at 04:27 No comments: