By Tricitynews Reporter
Chandigarh 06th March:- In a glowing tribute to womanhood on the occasion of International Women’s Day, the Chandigarh-based Hartek Group, one of India’s fastest growing concerns in the power sector, today honored women achievers from the region who have stood against the tide, broken male bastions and never looked back.
At a special “Celebrating Womanhood” felicitation ceremony organized here by women employees of the Hartek Group, Chandigarh Mayor Asha Kumari Jaswal honored the outstanding women achievers with mementos, commendation certificates and cash awards. Appreciating the initiative taken by the Hartek Group, the Mayor said that such women are the pride of our society. We should draw attention to their inspiring success stories at every given opportunity so that they act as role models for other women. 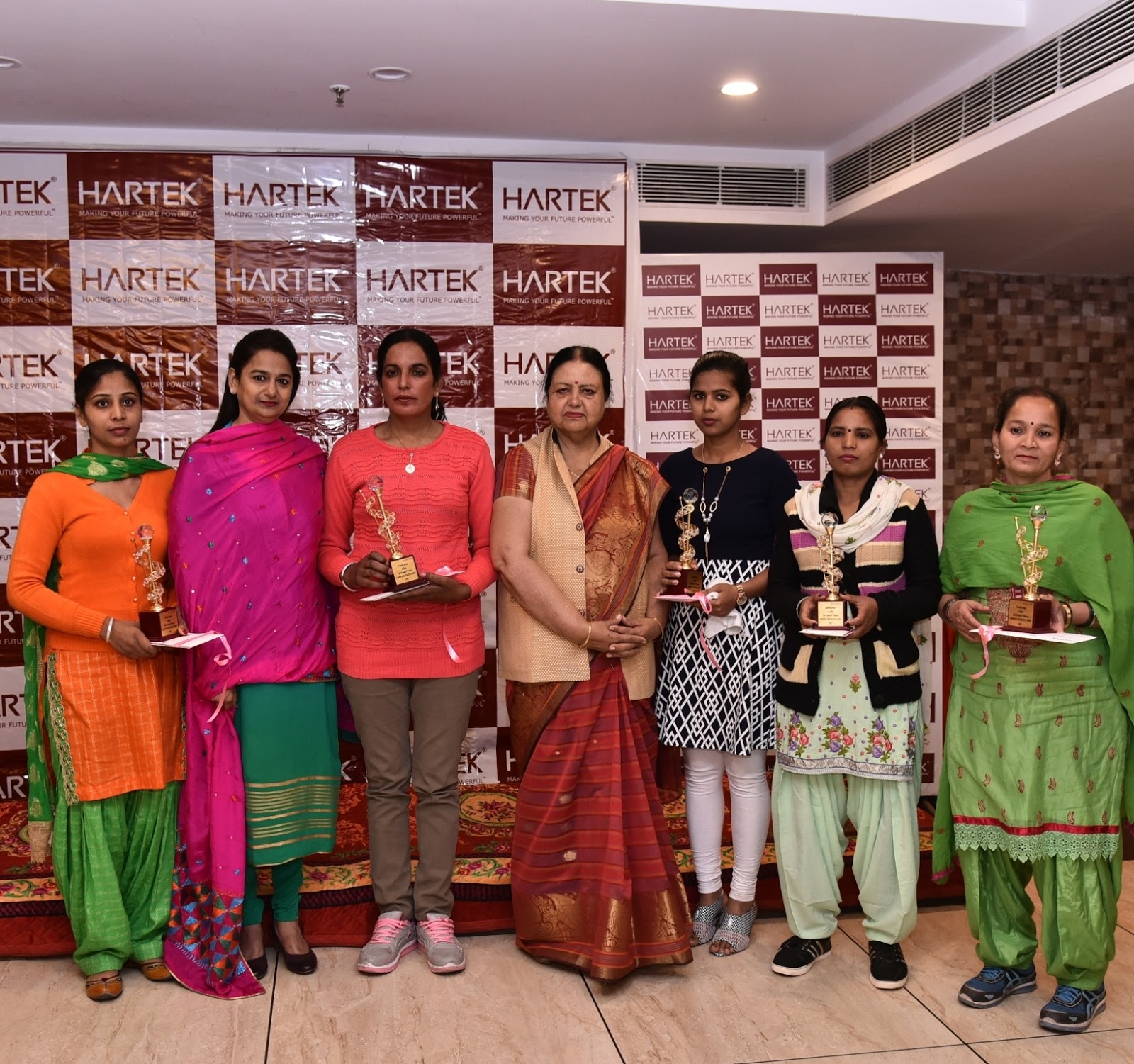 The awardees included Manjit Kaur, an ambulance driver in Jalandhar who forayed into male bastion by taking up this job nine years ago to support her family after her husband suffered a paralytic attack, Mandeep Kaur, who broke yet another male bastion by becoming a Chandigarh Transport Undertaking (CTU) bus conductor two years ago but not before facing stiff resistance from her family members, Dolly, who works as a security guard at a city hotel where she also does night shifts to support her family of five, and Radha Devi, the sole breadwinner of her family who has been running a tea stall in Sector 34, Chandigarh, for the past 10 years to repay her family’s loan and support her seven siblings.
Congratulating women employees of the Hartek Group who were the spirit behind the “Celebrating Womanhood” ceremony, Keerti Singh, Director, Human Resources, Hartek Group, said that we are proud of you for taking the initiative to observe Women’s Day in such a wonderful way. Women are equal partners in India’s growth story, and we need to empower them to empower the New India.
Narrating how adversity brought out the real fighter in her, Manjit said that nine years ago, her life crashed into chaos when her husband suffered a paralytic attack. But she stood as a rock to take on the challenges life had brought her way. She worked as a maid in houses till she had enough money to buy an ambulance of her own. But as Manjit soon realized, working as an ambulance driver is not easy if you are a woman, especially at night. She have been attacked a number of times while on night duty, but her fighting spirit has kept her going. She also faced a lot of opposition from her brothers who were dead against this job.
The Hartek Group had observed Women’s Day last year by organizing a free breast cancer screening and awareness camp in association with the PGI at the anganwadi in Bapu Dham Colony, Chandigarh.

Posted by tricitynews online at 04:38 No comments:

Decision Regarding Health Needs To Be Taken with Sensitivity:Jagannath Shinde

By Tricitynews Reporter
Chandigarh 06th March:- Network of online medicine sell is spreading all over the country. President of All India Organisation of Chemist and Druggist (AIOCD) Jagannath Shinde has raised question, why government is ignoring issue related to health of citizens as decision needs to be taken with sensitivity, does such emergency is prevailing in the country that online medicine of drug has been commenced immediately? Point wise memorandum has been submitted by the AIOCD to Deputy Secretary of Central Ministry of Health and Family Welfare K. L. Sharma on draft guidelines framed by the Central Government regarding E-Pharmacy.
Online Sell of Drugs should not be looked from the perspective of discount, as long term and unrecoverable rights and security of the customers should also be taken into the consideration. In reality the central government has fixed profit of drug sellers and selling medicines at further discount raises doubts about the quality of the medicines. This competition is unreasonable with question mark over dignity and existence of 8 lakh drug sellers.
AIOCD has presented memorandum to the Secretary of Central Health Ministry in Delhi, pointing out truth and shortcomings in the business of drug sells. Committee established under DCGI should not only have representatives of regulatory bodies but persons from all the quarters of the business should be included in them. New central authority has been proposed for online drug sell in the draft of Central Government which is against the principles of decentralisation of the authority.
Rural areas of the country don’t have adequate facilities off health along with lack of highly qualified doctors, thus Central Government needs to focus on strengthening of regulatory mechanism which is weak. Memorandum with various points like Laboratory, IT centre, Law Unit to examine the quality of medicines has been submitted.
Draft needs to be inclusive of issues like entry of drug mafia, youth getting attracted to drug addicts, interest of the customers, social interest of HIV patients, health protection of buyers etc., even though the Central Government is intended to make medicines available all over. President of All India Organisation of Chemist and Druggist Jagannath Shinde has made a clear demand that the proposed amendments to Drug and Cosmetic Act of 1940 or rule 1945 and permission to online sell of drugs should be withhold till draft is amended and objections raised by the AIOCD are addressed by the Central Government.
Posted by tricitynews online at 04:31 No comments: 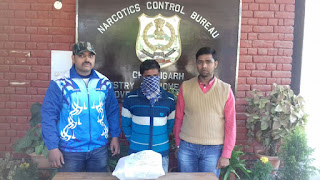 By Tricitynews Reporter
Chandigarh 06th March:- NCB Chandigarh Zonal Unit seized 2.520 Kgs. of Opium and arrested one persons Ompal resident of District Bareilly, Uttar Pradesh.
Dr. Kaustubh Sharma, Zonal Director, NCB said that the NCB team had received information that the above person is involved in drug smuggling during the last six months and supplying Opium in Chandigarh and Mohali region. This is his 2nd attempt to supply Opium in the region. Acting on this, NCB team had laid a naka near Airport, Chandigarh and arrested Ompal Singh when he is trying to smuggle Opium from Uttar Pradesh. The contraband was kept in small travelling bag which was recovered from the accused Ompal. This is the 15th seizure during this year Narcotics Control Bureau, Chandigarh. This is the 5th Opium seizure by NCB during the year.
Posted by tricitynews online at 04:27 No comments: 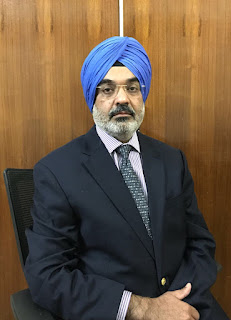 By Tricitynews Reporter
Chandigarh 06th March:- A complex Reverse shoulder replacement surgery was performed at SPS Hospitals, Ludhiana by Dr Harpreet S Gill, Head of Joint replacement and Orthopaedic Department.
According to Dr Harpreet S Gill, this was performed for the first time in the region North of Delhi. Reverse Shoulder Replacement is the new treatment for shoulder fractures in elderly, in cases of arthritis of shoulder with muscle tears or in certain complex shoulder problems and in those where the normal shoulder replacement has failed.
Surgery was performed on a 72-year-old female from Patiala. She was having shoulder pain for the last 8-10 years and had tried all sorts of treatment but to no avail.  All the movements of her shoulder were lost and even slight movement of shoulder caused pain. She was unable to sleep for hours because of severe pain and her activities of daily living were comprised. Now at about 2 months post reverse shoulder replacement she is pain free and has regained her shoulder movements.
Dr Harpreet S Gill, who has been trained at Johns Hopkins University Hospital, USA for this says that in the west too, this type of shoulder replacement started around 10 years back and is now being done routinely. However, in India this surgery is still in early stage as the patient awareness is less and the doctor training for such surgery is lacking in India.
The reverse shoulder uses a ball and socket joint as well, but the ball is placed on the shoulder blade and cup on top of the arm bone. This is reverse of our normal anatomy, and thus the name.
Posted by tricitynews online at 04:19 No comments: 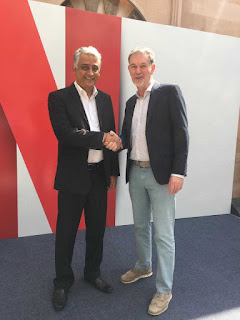 Netflix will be available on an exclusive app available on connected Set top box, HD SMART Set top Box (Connected Set top box) which converts any existing TV into a Smart TV besides showing you more than 600 Channels & services in High Definition and Standard Definition. The HD Smart Connect set top box allows consumers to watch their favorite channels in SD and HD, using the satellite feed like any other Videocon d2h set top box. The set top box can be connected to the internet through any Wifi or Ethernet connection in the home for accessing a curated set of applications available through the internet. The minimum internet speed needed is 2 Mbps. These apps, both free and paid cover a range of content genres and utility apps.  By connecting the HD Smart Connect Set top box to any TV, the TV would become Smart.  Already available in the app store are many entertainment/news apps, utility apps and more are being continuously added.
Saurabh Dhoot, Executive Director Videocon d2h said that we are extremely proud to have Netflix as our partner on HD Smart Connect STB. Our partnership will strengthen our DNA of innovation by providing TV screen experience for Netflix users in a seamless manner. This partnership in India with Netflix gives the customers the simple click of a button to easily select between our DTH and world class apps like Netflix services on the HD Smart Connect Set top box.
Anil Khera, Chief Executive Officer, Videocon d2h said that with Netflix on board, Videocon d2h is enhancing its position as the customer’s first choice of entertainment. Integrating premium entertainment services like Netflix into our services offered via HD Smart Connect Set Top Box will make us even more attractive for our consumers. We will continue to deliver exceptional entertainment and give consumer the power to view content and enhance our leadership in homes with wifi/broadband.
Reed Hastings, Co-Founder and CEO, Netflix, said that while there are millions of consumers all over the world using Netflix, enjoying the ability to watch anywhere, anytime and the incredible variety of programming we offer, we are really only at the beginning of our journey here in India. This partnership with Videocon d2h is important for us in the way we reach to the diversity of the Indian market and will make it much easier for Indian consumers to watch Netflix.
Videocon d2h has prided itself in presenting its subscribers with a robust line-up of more than 600+ channels and services, including a host of regional channels. It offers a wide range of active services like smart services including Smart English, Smart Games. The other active services include d2h Hollywood HD, d2h music, d2h spice, d2h cinema in both Standard Definition and HD, etc.

Posted by tricitynews online at 04:14 No comments: