Demonetization Has Worked As An Injection for The Corrupt:Manoj Tiwari 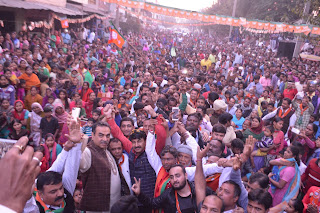 By Tricitynews Reporter
Chandigarh 12th December:- Bhojpuri singer, actor, turned politician Manoj Tiwari, recently appointed as Delhi BJP President, today attracted large crowds as thousands of his fans and BJP supporters turned up in support of the Bharatiya Janata Party (BJP) candidates contesting for the forthcoming MC polls.
The venue of his public meetings was full to capacity wherever he addressed public meetings. Besides the singing sensation others who were present at Colony number 4 in ward number 20 included Bhagat Singh Koshyari, former CM Uttarakhand; Sanjay Tandon, Chandigarh State BJP President; Shakti Prakash Devshali, candidate from ward number 20; Ravinder Pathania, Chandigarh BJP Media Incharge, Dr. O.P. Verma; Naresh Arora; Meghraaj Verma; Leelawati; Raghunath; Ram Shukal; Rajkumar and other party workers.
Manoj Tiwari visited ward number 11, 12, 13, 19, 20, 24 and 26 and addressed the voters in his effervescent style and charisma. Tiwari, dressed in a white kurta pyjama and red shawl made his way to the stage in colony number 4. Mere a glimpse of the supertaster was enough to set the stage on fire and invigorate the BJP supporters.
Manoj Tiwari addressed the audience in his local lingo and received an outstanding response. “Aisan laagat ba hum apan gaun ma aa gael…” (Seeing the gathering it seems I am in my own village) was one line from the star that was enough to set the ball rolling for a tremendous support from the natives and the BJP supporters.
While addressing the audience Manoj Tiwari said that you all are aware of the fact that our Prime Minister is a man of substance and has a humble beginning. He has progressively grown to reach and attain this stature and is on the path of nation’s development. This may take time as Rome wasn’t built in a day and building the nation is not an easy task.
He requested the public to support and elect the BJP candidates so that the development can continue and it is easy to implement the changes we all want to see in our city.
Manoj Tiwari along with Chandigarh BJP President Sanjay Tandon came to support her ward no 13 candidate, Heera Negi at EWC colony in Sector 49. A huge crowd was overwhelmed to see Manoj Tiwari, who enthralled the supporters with a Bhojpuri Song and appealed to vote for Negi.
Manoj Tiwari said that Narendra Modi works for the development of all common people. He also said that congress and other parties didn’t leave any chance to target us on demonetization but standing in a queue of ATMs, the people of India didn’t complain which shows they are in support of this crusade against black money.
Bhagat Singh Koshyari in his address at Colony 4 said that all the poor in the nation today have an account- the Jan Dhan account, and with the demonetization surgical strike money has started pouring in those accounts. And with the money that has been received by the government will be utilized for nation building and development. And if you want to witness development you must support the BJP brigade for the holistic development of the country and also give a little time as it takes time to build home too after laying the foundation stone.
The former CM also addressed a rally in Maloya along with MP, Kirron Kher. While appealing for vote in favour of ward candidate Rajesh Kalia he said supporting the party candidates will strengthen the local MP Kirron Kher. He also addressed a public meeting in Sector 46 in support of Gurpreet Singh Dhillon, BJP candidate of ward number 21.

Posted by tricitynews online at 06:16 No comments:

Demonetization to Set an Example for Other Countries as Well:Bhagat Singh Koshyari 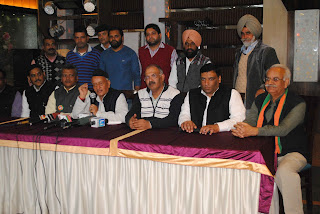 By Tricitynews Reporter
Chandigarh 12th December:-Bhagat Singh Koshyari, former Uttarakhand Chief Minister today said demonetization was one of the biggest reforms ever introduced by the government. Lauding the initiative of the Narendra Modi government he described demonetization in a one liner saying, “Yeh note bandi nahin, note badli hai (this is not a note ban but note change).
Bhagat Singh Koshyari in a press conference held here today said in the last two and half years of Modi government the country has experienced a lot of development. He said the government was there not just to rule but to bring a difference in the country.
Bhagat Singh Koshyari said that the Prime Minister has taken up this initiative to check black money”, he said, and came down heavily on the Congress for misusing the sanctity of the parliament by not letting it function. Bhagat Singh Koshyari said that demonetization was a welcome step for the poor and it is only those will unaccounted cash who were disturbed over it.
The former Uttarakhand CM termed black money as a disease for the society, adding this move will set an example for other countries as well. He said that he had travelled in other parts of the country including Uttarakhand and people were happy over the move”, Koshyari said, adding, the Swachh Bharat Abhiyan of the Prime Minister has been taken forward by cleansing the society on the whole through demonetization.
Others present on the occasion included, Chander Shekhar, General Secretary, BJP Chandigarh Ramvir Bhatti, BJP Chandigarh Vice President, B.S. Bisht,         BJP Uttarakhand Cell
President, Ravinder Pathania, BJP Chandigarh Media Incharge and Dr. A.P. Sanwaria, Spokesperson, Chandigarh BJP among others.

Posted by tricitynews online at 06:03 No comments: 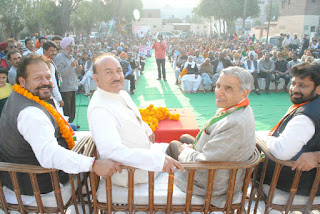 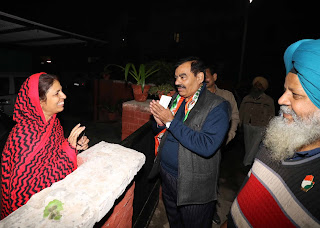