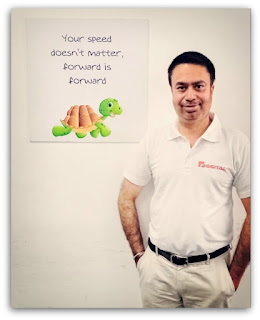 By Tricitynews
Chandigarh 21st Feb, 2020:- Realising the importance of modern retail, Chandigarh start up Pumpkart, a well known e commerce giant, has decided to set up a modern retail store by the name of 'Figgital' in Chandigarh. Company sources informed that after Chandigarh, more Figgital outlets are on the anvil.
K S Bhatia, Founder & CEO, Pumpkart said that Pumpkart is the only ecommerce company in India which has been profitable for the past 2 years. But to scale its operations while still being profitable, we have realized that Pumpkart would have to embrace offline too. Keeping this in mind Pumpkart is now rebranding itself as Figgital.
K S Bhatia added that Figgital means a combination of physical & digital which Pumpkart is now becoming with the launch of these retail stores. The first experience store will be unveiled for its customers in March 2020 at Chandigarh. Customers would be able to experience the product before purchasing. They have a choice of placing orders online or by physically visiting stores and buying from there.
While the millennial customer might be hooked on to online, there is a very large chunk of the customer segment that hasn’t been able to develop trust easily on the online purchase. This lack of trust has been aggravated by the recurring news of duplicate material being sold online and botched up deliveries where the customer feels tricked.
Manish Saini, COO of Pumpkart said that such reasons have been instrumental in online being able to capture only 3% of the market share while modern retail which started almost at the same time as online, has been able to capture 12% of the market. Online companies have off-late realized this bitter truth of the Indian market and are taking the reverse route.
It is noteworthy that recently, Flipkart decided to go offline and create touch and feel stores. It was not the first company to do so. Lenskart, First-cry and many other startups have taken the channel which they had challenged a few years back.
Manish Saini further stated that these experience stores would act as nodal stores for corporate customers in B2B and would be accessible to only limited B2C customers. We shall give priority access to management of MSMES (micro, small & medium enterprises) and their employees too, who shall also get prices equivalent to the distributor price.
It is pertinent to mention here that Pumpkart was also in news recently when it rebranded its 15 Service Franchise outlets with the name NNJA. Through these NNJA service centers, the company is already providing insurance and extended warranty to its customers for all electrical and electronic appliances and gadgets including mobiles laptops etc. NNJA now would also serve Figgital's customers and would provide the same services to them.
Manish Saini added that it’s the customer who taught us the importance of Physical touch and feel for them. What we are simply doing is that the stock which till date was in our warehouses would now be displayed to the customers. He also said that Figgital would not be just another consumer durables shop but would be an experience zone which is the missing link between online and offline right now.
K S Bhatia summed up that these Figgital retail stores are providing us the opportunity to rebrand ourselves because Pumpkart was a name associated with Pumps by most of our customers.
Posted by tricitynews online at 04:54 No comments: 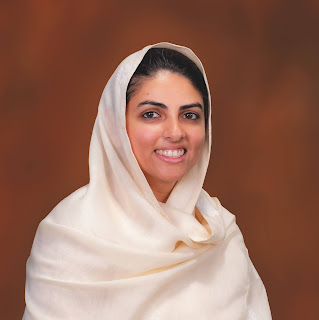 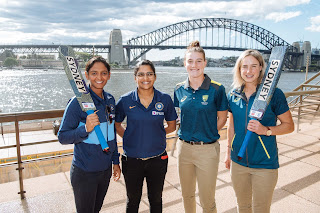 By Tricitynews
Chandigarh 21st Feb, 2020:- Players and fans take part in an afternoon of festivities in the lead up to the Opening Ceremony and game on Friday The Australian and Indian women’s national cricket teams were officially welcomed to Sydney, NSW today at the iconic Sydney Opera House ahead of the T20 Women’s World Cup 2020 opening match at Sydney Showground Stadium on Friday 21 February. The formalities, hosted by The Hon. Stuart Ayres MLC Minister for Jobs, Investment, Tourism and Western Sydney and The Hon. Bronnie Taylor MLC Minister for Mental Health, Regional Youth and Women, showcased a taste of Sydney’s unique and diverse spirit and its local culture with a special indigenous performance by Redfern-based Tribal Warrior on arrival and acknowledgement to country by indigenous Australian player, Ashleigh Gardener. T20 World Cup CEO Nick Hockley took to the stage before lawyer and Founder or Women In League, Mary  onstantopoulos, hosted a Q&A with Australian captain Meghann Lanning and Indian captain Harmanpreet Kaur. Both captains were presented with commemorative cricket bats painted by Wollongong indigenous artist Zachary Bennett-Brook. In light of the recent bushfires, 30 junior players from Camden Cricket Club presented each player with an annual koala adoption from Port Stephens Koalas, a gift that helps with the rescue and treatment of sick and injured koalas in the region.
Posted by tricitynews online at 04:21 No comments: 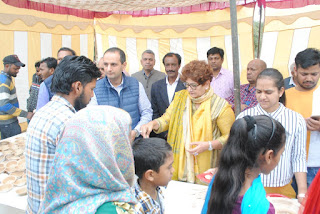